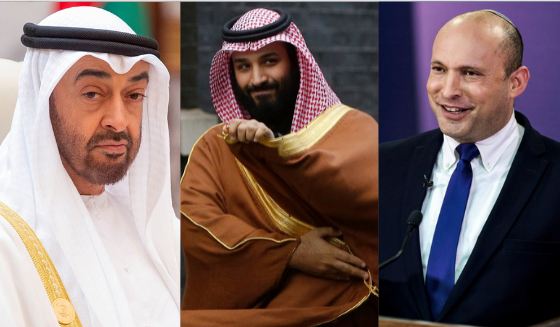 There is a multiplicity of factors which has contributed to relations between Israel and the Arab world normalising. First, has been the practical death of pan-Arab support for Palestine. Second, the rise of Iran, and its tryst with regional militias apart from a thirst for nuclear bombs has rattled the Arab world led by Saudi Arabia. Third, the Arab world is realising the importance of economic prosperity, trade and commerce and a departure from single-sector dependent economics. Israel – the only vibrant democracy in the Middle East, therefore, becomes essential for the Arab world to befriend.


Despite Saudi Arabia not formally normalising ties with Israel, it has nonetheless got involved in some heavy economic projects with the Jewish nation which have the potential of drastically altering the geopolitical realities of the Middle East. First, is the “Tracks for Regional Peace” initiative, which would link Israel’s Haifa seaport to Jordan’s rail network. From Jordan onwards, the railway corridor would go southwest into Saudi Arabia connecting with the country’s existing north-south line. Second is the city of Neom in Saudi Arabia, and third, of course, is the Trans-Israel pipeline.

The “Tracks for Regional Peace” initiative is a rail transport plan that will connect the Mediterranean and the Gulf and is based on two central ideas – Israel will be a land bridge and Jordan will be the regional transportation hub. The project envisages transporting people and cargo from the US and Europe to Gulf states in the east. Israel believes the initiative will “build peace” and “encourage stability and create vibrant economies” by connecting the Middle East.

The city of Neom is another marvel which Saudi Arabia knows it cannot create without cooperation from Israel. In June 2017, Egypt handed the islands of Sanafir and Tiran over to Saudi Arabia, located off the coast of Saudi Arabia and the Sinai Peninsula. Egypt gave islands to Saudi Arabia on the assumption that Egypt’s economy would benefit from Neom. Now, Saudi Arabia intends to make a bridge crossing the Strait of Tiran, thereby connecting Egypt to Neom.

However, in order to expand Saudi Highway 392 and build a Saudi-Egypt bridge, the kingdom requires the permission of Israel. The 1979 peace treaty between Egypt and Israel mandates the latter’s access to the Red Sea, which is why Saudi Arabia must have the go-ahead for building the 10-kilometre-long bridge from the Jewish nation. For Saudi Arabia, the $500 billion-dollar Neom city project is a make-or-break initiative, and crown prince Mohammed Bin Salman is heavily invested in the same. In all likelihood, Israel will also help in the development of the Neom city and share critical technologies with the Saudi leadership which can make the upcoming city a model of how promising an urbanized future will be across the world.

For the Israelis, normalisation of ties with Arabs is a prerequisite to them having a safe and secure future. Israel is countering rhetoric aimed against it by promising the Arab world mutual economic prosperity. And then, Israel is the flagbearer of anti-Iran sentiment in the Middle East, making the country a natural ally of Saudi Arabia, which is itself under stress due to Iranian attempts at displacing Riyadh from the position of the global leader of the Muslim world.

Meanwhile, the warming of ties between Israel and the United Arab Emirates (UAE) is going to revolutionise energy trade in the region by reinvigorating the Trans-Israel pipeline which will ensure smooth trade of Gulf oil into the Mediterranean and further North into European markets. The Trans-Israel pipeline connects Eilat, located on the Gulf of Aqaba at the northern tip of the Red Sea to Ashkelon, an Israeli port city on the Eastern Mediterranean coast. The 254 km-long pipeline passes through the Negev Desert region and effectively bypasses the Suez Canal.

At the same time, Turkey and Iran are infuriated with the growing bonhomie between Israel and the Arab world. Even when the Abraham Accords were signed last year, both these nations had taken to threatening all signatories. Essentially, they saw their geopolitical goals biting the dust, since the anti-Israel rhetoric on which the two have thrived thus far suddenly became a taboo among the Arab leadership.