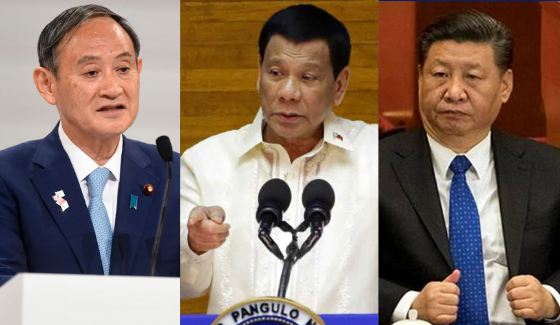 The beauty of democracy is that however strong the leader of the country may be, he/she has to put the concerns and interests as inferred by the citizens ahead of their own, or else they may lose their position. This is exactly what has happened in the Philippines, as the public opinion about China has worsened, Duterte has to look for other like minded partners, and Japan has become the most obvious choice.

While on one hand, only a fraction of the US$9 billion in soft loans and US$15 billion worth of direct investments that Beijing promised Manila in 2016 has been paid out, Japan on the other hand has turned out to be the real friend of the Philippines. Japan’s official development assistance dwarfs China’s aid to the Philippines, with US$8.5 billion in 2019 while Beijing also charges higher interest rates on loans with many hidden strings attached, which is not the case with Japan.

Five years after promising Manila a slew of investments and about 10 months away from the next Philippines election, most big-ticket projects funded by China have yet to break ground or have not been approved, with only three under construction. And while not stepping up to its promise, Chinese vessels this year have swarmed disputed territory claimed by the Philippines in the South China Sea – exactly the kind of aggressive moves that Duterte had hoped to avoid by getting closer to Beijing at the expense of the US, a long-time treaty ally. This has entirely changed the public opinion of China among the Filipinos and with the elections coming up, favouring China is a sure shot move to lose the elections.

Read more: The Philippines’ latest actions show that it has realised that China is bully who can only talk

On the other hand, Japan’s official development support to the Philippines surpasses China’s, at US$8.5 billion in 2019. According to Philamer Torio, a professor at the Ateneo School of Government in Manila, Beijing charges higher interest rates on loans that “have strict confidentiality clauses.” “Our traditional allies Japan and the United States continue to be our best funders for official development assistance,” said Torio, who has researched infrastructure funding.

“Our traditional allies Japan and the United States continue to be our best funders for official development assistance,” Torio told SCMP, who has researched infrastructure funding. Manila has realised this and has increased its cooperation with Japan. The latest exhibit being, the Philippine and Japanese air forces will hold their first-ever joint exercises next week, Tokyo’s embassy said Thursday, signaling a deepening of bilateral ties amid the nations’ tensions with Beijing over territorial disputes in the South and East China seas. In addition to this, the Philippines will receive one million doses of AstraZeneca (AZN.L) COVID-19 vaccines by the end of July and it will be provided by Japan.

The political situation in the Philippines has changed and potential candidates that can succeed Duterte are attacking his China policies. Boxer-turned-senator Manny Pacquiao has criticised the president’s response to Chinese incursions, while Vice-President Leni Robredo – the opposition’s possible candidate for the presidency – has blasted Duterte for “selling out” to China and throwing away the nation’s sovereignty by referring to the 2016 international arbitration ruling in favour of the Philippines’ territorial claims as “a scrap of paper.”

The political situation is making it easier for Japan to make a heroic entry into the country as a good friend, while the next government will surely see a recalibration of its relations with China.