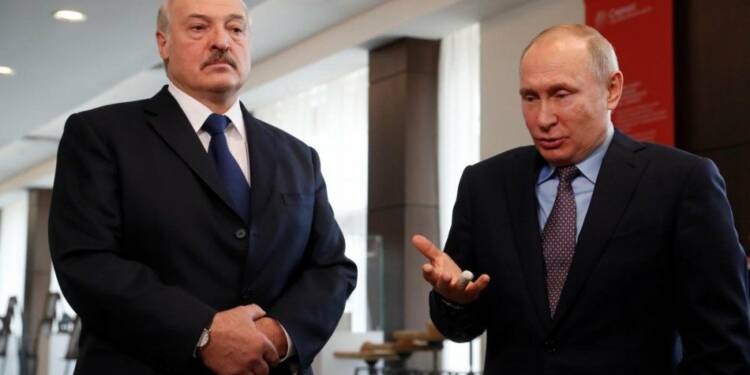 Belarus and Russia once together formed the Soviet Union

Belarus and Russia once together formed the Soviet Union along with other states which after the collapse of 1991, declared independence. As a matter of fact, the Belarusian President – Alexander Lukashenko once wanted to expand his portfolio, and become the President of Russia! Can you believe it?

Belarus is special. So far, it has had only one free and fair election – and that was right after the collapse of the Soviet Union. In that election, strongman Alexander Lukashenko emerged victorious and has ruled over Belarus ever since. Lukashenko is a ruthless politician. Both Belarus and Russia share quite a history which is not talked about much, or even known to many.

But what if we told you Alexander Lukashenko had once orchestrated a coup so magnificent, that despite it not succeeding, one cannot help but appreciate his courage. Russian President Vladimir Putin is known to have plans to reunify the erstwhile Soviet Union, and the same was evident during the annexation of Crimea in 2014, and by what is also visible with the hostilities between Ukraine and Moscow. This is the story of a failed yet magnificent coup, a thirst of power and of course, the rise and rise of Vladimir Putin. This is the story of Russia and Belarus.

The union of Belarus and Russia is an asset that should be preserved, augmented and passed on to future generations, Belarusian President Alexander Lukashenko was heard saying on Thursday. According to Lukashenko, this is the mission of the current generation and the leadership of both countries, and everything necessary will be done to achieve this end. This is proof enough to suggest that if Russia and Belarus were to ever come to a point where they integrate with one another, not a single bullet will be fired.

Under what was largely seen as a trying rule of former President Boris Yeltsin in Russia, Alexander Lukashenko had hatched quite a plan for himself. Yeltsin had exhausted himself politically. Anti-incumbency against him was sky high, and anyone who would have contested a free election against him would win. Alexander Lukashenko, despite being the President of Belarus, thought a unification and integration with the Russian Federation would serve as a good opportunity to become the President of Russia itself.

So, in 1999, Russia and Belarus signed a Union Treaty, committing the two former Soviet states to merging into a confederal state. Alexander Lukashenko welcomed the treaty, commenting that it would allow the two countries to strengthen their position in relation to the West in the face of “unprecedented oppression by other states”. Remember, Lukashenko was pushing for a full merger for both the countries, but that is not what he got.

Back then, the agreement merely established a council of officials from both countries to co-ordinate policy. It also proposed the eventual merger of their currencies. This did not immediately serve any of Lukashenko’s goals. Yeltsin was exhausted, but he was definitely not foolish to not see though Lukashenko’s plans. At one point during the ceremony in Moscow, Boris Yeltsin even turned to Lukashenko to ask, “Is that the end?”

Putin proposed that Belarus merge with the Russian Federation

Lukashenko’s popularity in Russia was rising. He began making friends in the Russian Duma, the country’s oligarchy and also began befriending regional leaders. Lukashenko began touring all across Russia, while reports began indicating that snap elections and a constitutional referendum were about to be announced.

Boris Yeltsin, however, pulled a rabbit out of his hat. Vladimir Putin was brought into the picture. He is a former KGB agent. Russia’s security apparatus propelled his rise to the Presidency – after being rattled by Lukashenko’s rather bizarre plan to become president of the Russian Federation subsequent to the merger of Belarus. Putin proved to be a different ballgame altogether. He is a soviet revivalist, and while he is more than welcome to the idea of Belarus reunifying with Russia, there is not a chance in hell that Lukashenko can eye the Russian Presidency.

Vladimir Putin has systematically ensured that while ties between him and Alexander Lukashenko flourish, the Belarusian President remains aware of who Putin is, and what he represents. In 2002, on lines of the German reunification model, Putin proposed that Belarus merge with the Russian Federation. Lukashenko did not like the idea. In 2004, Putin pushed for a referendum regarding the merger of Belarus with Russia, and also called for elections to the state union – knowing fully well that he would win them. Even Lukashenko knew that Putin would win, and so, he again objected to the Kremlin’s proposal.

Read more: The Belarus blunder – Biden is bringing a war to Europe that Europe can’t win and Biden won’t help them

Ever since, the sole reason why Lukashenko is still in office is Vladimir Putin, and the support he has from Moscow. Putin has been able to co-opt the Belarusian strongman to a great extent. In 2020, when Belarus’ streets were inundated by anti-Lukashenko demonstrators, it was Moscow, which had come to the Belarusian President’s rescue. The Lukashenko regime was, for all practical purposes, saved by Vladimir Putin. Ever since Alexander Lukashenko has missed no opportunity to repay Moscow.

Recent statements by Lukashenko show that his enthusiasm for merging Belarus with Russia is getting reinvigorated – perhaps at the behest of Vladimir Putin. Interestingly, the merger of Belarus and Russia will not even be an “annexation”. This will be a huge crisis for the West, which will witness right before its eyes as Vladimir Putin begins the reconstruction of the Soviet Union.