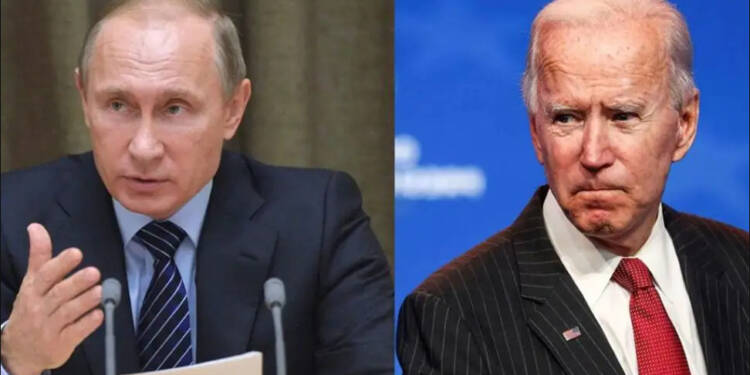 Joe Biden and his administration have created a slew of problems for the US and its allies in a record time in office. And as if this was not enough, now he is forcing the hands of the Russian Federation, by doing multiple provocative exercises and including the NATO allies in these events too. NATO reports that it conducted what is described as air defence exercise in the Black Sea on July 2. These continued provocations will make the situation so intense and confusing that going ahead, it can lead to a WW3 and if we look at the actions of Biden, it seems he is purposefully taking the world there.

The manoeuvres were clearly separate from the 32-nation Sea Breeze naval and aviation drills that were taking place at the same time. And of the recent port visits and exercises in the same sea by the HMS Defender guided-missile destroyer and the HNLMS Evertsen frigate, the first almost provoking an international incident, if not a war, on June 23. After the submarine sinking exercise, the US takes NATO for an Anti-Russia Black Sea Drill.

On 2nd July, NATO Air and Maritime forces (as distinct from or as a combination of NATO’s Allied Air Command and NATO’s Maritime Command) held an Air Defence Exercise (ADEX) in the Black Sea “to improve Alliance cooperation, practise air-maritime communications and build stronger relationships between Allies.” In shorthand, to prepare for war with Russia in and off the coasts of the Black Sea.

Recently, things went berserk in the Black Sea region, when Russian fighter jets and ships reportedly fired off warning shots at the British Navy. The latter had violated Russia’s maritime border near the Crimea coast. Russia then issued a statement, which suggested that it will not tolerate any attempt to undermine its position in the Black Sea region, but Biden seems eager to rub Moscow the wrong way.

On June 21, the US sixth fleet announced that it would participate in the Sea Breeze exercise in the Black Sea, scheduled to take place between June 28 and July 10. Biden has made the exercise, co-hosted by the US and Ukraine, a grand affair on purpose. The US says that “this year’s iteration has the largest number of participating nations in the exercise’s history with 32 countries from six continents providing 5,000 troops, 32 ships, 40 aircraft, and 18 special operations and dive teams scheduled to participate.”

The countries participating in the Sea Breeze exercise include Turkey and the United Kingdom, which is bound to rile up Moscow about attempts to undermine Russian influence in the region. The US is deliberately instigating countries like Ukraine, Turkey and the UK against Russia.

Read more: Despite Russia’s warnings, Biden is sending the US Navy to Black Sea alongside UK. The repercussions can be grave

Combat aircraft from Greece, Romania, and Turkey took part in the not-so-imaginary or abstract warfighting scenario, as did a NATO AWACS aircraft, a Romanian C-27 transport aircraft, a Turkish military patrol aircraft, and three frigates from the Standing NATO Maritime Group 2 (SNMG 2): the Italian Navy flagship Fasan, the Romanian Navy’s Regina Maria, and the Turkish Navy’s Barbaros. The three frigates are now crossing the Black Sea and will take part in the Sea Breeze war games – if they remember which NATO war game they are assigned to on any given day.

A NATO press release on the exercise described it like this: “The air-maritime integration training demonstrates NATO’s capabilities, readiness and resolve to protect Allied populations; with our ships and aircraft peacefully operating off the Romanian coast we also assure the Allies in the region.” The Russian government has time and again reiterated that any continuity of provocative actions that in any way jeopardize Russian sovereignty will be met with an equal response. Not caring for these concerns, Joe Biden is taking the NATO allies to the point of no return, and as things stand, Biden may be taking the world to a WW3.