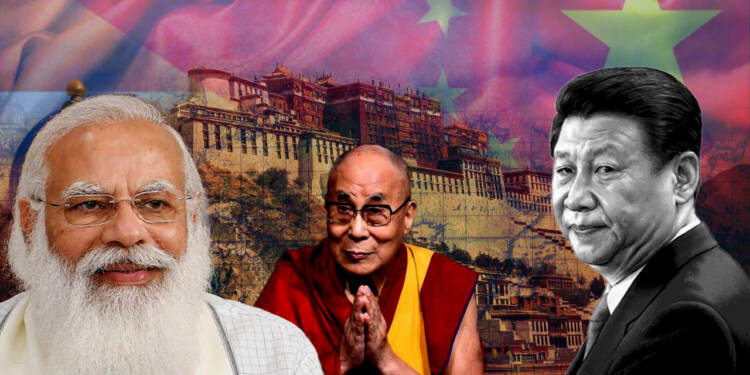 Tibet was once a free country. In 1950, Chinese occupational forces swarmed the free country and illegally forced it to become a part of China and come under the totalitarian rule of the Chinese Communist Party (CCP). The 14th Dalai Lama, known as Gyalwa Rinpoche to the Tibetan people, is the current Dalai Lama, the highest spiritual leader of Tibet, and a retired political leader of the occupied region. He had organised an uprising against the Chinese during the 1950s, but the same was crushed by the CCP. The Dalai Lama then travelled down the Himalayas and took refuge in India.

Ever since the Dalai Lama has made the Indian hillside town of Dharamshala his headquarters. In fact, a Tibetan government-in-exile is operated out of the Indian town – which speaks volumes about the disgust which India has had for China’s illegal occupation of Tibet. However, successive governments have, in order to not antagonise China, maintained an arms distance from the Dalai Lama and the issue of Tibet’s independence.

Prime Minister Narendra Modi is cut from a different cloth. He is not the usual Prime Minister. So, when the Indian Prime Minister on Tuesday openly sent his well wishes to the Dalai Lama on his 86th birthday, the people of India and Tibet were jubilant. This is the first time since taking over as Prime Minister that Narendra Modi has openly associated with and wished the Dalai Lama. Not only did Modi wish the Tibetan spiritual leader on Twitter, but also called him and spoke to the man who has millions of followers around the world.

PM Modi tweeted, “Spoke on phone to His Holiness the @DalaiLama to convey greetings on his 86th birthday. We wish him a long and healthy life.” China regards the 14th Dalai Lama, who has lived in exile in northern India for more than six decades, as a dangerous “splittist”, or separatist, and is outraged upon seeing any engagement with him.

Spoke on phone to His Holiness the @DalaiLama to convey greetings on his 86th birthday. We wish him a long and healthy life.

The public wishes for the Dalai Lama by India’s Prime Minister mark the beginning of a departure in India’s adherence to the much-touted ‘One China Policy’. Prime Minister Modi has signalled that he and his government are willing to play the Tibet card if China does not begin behaving itself. For decades now, India has maintained a safe distance from the Tibet issue, and consequently, from the Dalai Lama. However, that has not stopped China from stepping on India’s toes. Now, India is prepared to amputate China.

There are over 200,000 Tibetans living in India, and they are all elated with the Indian government’s new Tibet policy. Make no mistake, Prime Minister Narendra Modi and at least two senior ministers of his cabinet extending greetings to the Dalai Lama is no less than a massive policy shift when it comes to Tibet. A Tibetan Parliament member, Dolma Tsering described the call by PM Modi as a strong message to Beijing. He said, “This is a positive move from PM Modi on wishing happy birthday to His Holiness (Dalai Lama). PM Modi wants to send a message that India is no longer going to be very cautious talking about Tibet. It sends a very strong message to China.”

Lobsang Wangyal, a Tibetan activist remarked, “PM Modi calling the Dalai Lama to wish him on his birthday is a great gesture, despite the border issue between India and China. This is a sign of India showing its strength. It is a very strong message to China.”

Interestingly, China has not ‘officially’ reacted to the development. By all estimates, the Indian Prime Minister and his top ministers wishing the Dalai Lama on his birthday is an unprecedented happening in the eyes of China. However, the CCP is trying to evade the topic at a diplomatic level. We know for a fact, however, that the CCP is burning from within with rage but, unfortunately, it is not at the liberty to express.

So, while China’s wolf warriors have not officially reacted to the public greetings, the CCP’s mouthpiece – Global Times has done its part to dismiss India’s move as a mere “show of attitude”. Writing for the Chinese foreign ministry pamphlet, Hu Xijin said, “These small tricks cannot have any actual impact. Countries like the US, Japan, Australia and India have already fallen out with China. They like playing such small tricks to demonstrate their ‘values’.”

Read More: Substandard weapons and a diabolical foreign policy: China’s arms exports are falling and Russia and India are the biggest beneficiaries

India is a unique country. If China were to react to the development at an official level, it would risk bringing to the international limelight the issue of Tibetan occupation by the CCP, and how India is standing up to the same and beginning to discard the ‘One China Policy’. China fuming openly at India would further strain ties between the two countries – and India is not a country that China wants to infuriate. India has shown its ability to kick the CCP where it hurts them the most, and by reacting to the Dalai Lama getting wished by PM Modi, Xi Jinping cannot risk mainstreaming the Tibetan movement.

China is really caught between a rock and a hard place here. Neither can it react to the development during its regular press briefings, in which case it will be shooting itself in the foot, and neither can it ignore the significance of what Prime Minister Modi has just done. So, it deployed the Global Times and its editor to do its bidding and put up a brave face for the world when actually, the CCP is scared to its meek bones.

India, on its part, just does not care anymore. New Delhi has abandoned its policy of not annoying China, and now, Beijing can simply do nothing about it. Moving forward, the Modi government will make it a point to champion the cause of Tibetan independence across the world.