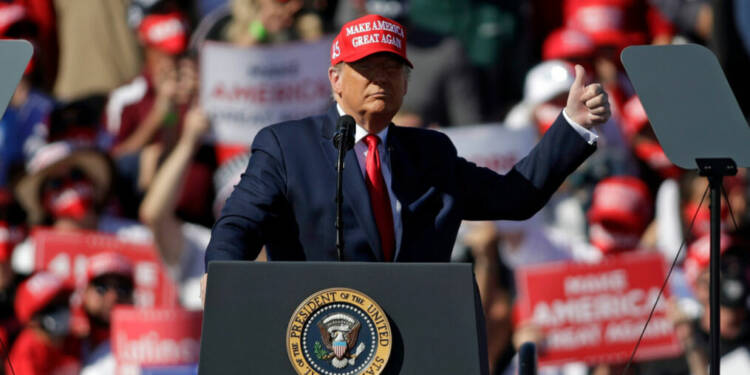 Former President Donald Trump on Wednesday announced major class-action lawsuits against Twitter, Facebook and Google after the firms suspended his social media accounts six months ago. American Big Tech has invited hell upon itself, and the former President’s legal team is all set to rip apart social media companies for their blatant disregard for the first amendment and free speech. Big Tech was of the impression that Donald Trump will take their aggression and disregard for democratic values lying down. However, by announcing major class-action lawsuits, Trump has turned the tables on the digital colonisers.

Trump announced the action against Facebook, Twitter and Google’s YouTube, along with the companies’ heads Mark Zuckerberg, Jack Dorsey and Sundar Pichai, at a press conference on Wednesday in New Jersey, where he demanded that his accounts be reinstated. Trump described the “major” lawsuits as a “very beautiful development” to protect free speech in the United States. The class-action suits will be filed at a U.S. District Court in the Southern District of Florida.

Trump said, “We’re asking the US District Court for the Southern District of Florida to order an immediate halt to social media companies’ illegal, shameful censorship of the American people. We’re going to hold big tech very accountable.” Regarding Big Tech’s outrageous influence over political discourse, Trump said, “It’s destroying the country.” Trump argued that Twitter, Facebook, YouTube and other social media companies have “ceased to be private” companies and cited the Section 230 protection shield that such firms employ to protect themselves from liability.

Trump’s legal team is all set to argue that Section 230 was created in the 1990s to protect children from harmful content online. The way in which Big Tech firms currently use the law as a shield, they say, oversteps what it originally intended to do. Section 230 of the 1996 Communications Decency Act allows internet companies to be generally exempt from liability for the material that users post. The law, which provides a legal “safe harbour” for internet companies also allows them to self-regulate, which they, in today’s day and age, weaponised to target conservatives and Republicans.

During his news conference on Wednesday, Trump accused the federal government of using Facebook, Twitter and Google as its “de facto censorship arm” during the COVID-19 pandemic. He was, of course, speaking about the nexus between Democrats and Big Tech to discredit claims which spoke to the actual origins of the novel Coronavirus.

Twitter, Facebook and Google banned Donald Trump from their platforms in January this year, after they and Democrats accused him of instigating the mob violence at Capitol Hill on the day Joe Biden was to be certified by Congress as the winner of the November 2020 polls. While Twitter executives have said Trump’s ban will be permanent, Facebook imposed a two-year ban on the former president’s account, and Google-owned YouTube has said it would continue his suspension until it has determined if “the risk of violence has decreased.”

Donald Trump is taking the devil by its horns. With the midterm polls a year away, Donald Trump is sending out an emphatic message – that he is still very much politically alive. It is no secret that Trump plans to run for the White House in 2024. By then, if he is able to bring American big tech to its knees with his class-action suits, Trump will become politically invincible in the United States.

Read more: GETTR : A new social media app created by an exiled Chinese billionaire has the blessings of Trump

It was Donald Trump’s suspension in January that spiralled into a worldwide campaign against American big tech, as countries realised the threat which such companies posed to democracy. Twitter has been subjected to a punitive slowdown in Russia since March. American big tech, as a matter of fact, has been receiving pushback from around the world. Whether it be countries like Australia, France, Poland, Germany, among others – all seem to have had just about enough of big tech high handedness. Nigeria and Uganda even went in for outright, blanket bans on social media companies, especially Twitter.

In India, big tech companies have been directed to fall in line, or face consequences. As a result, all companies, with the exception of Twitter, have complied with new IT rules brought in by the Indian government. For its defiance, Twitter is being punished in India on a daily basis. As it turns out, with Donald Trump’s latest offensive, big tech might just be on the cusp of facing fire and fury in the United States too.