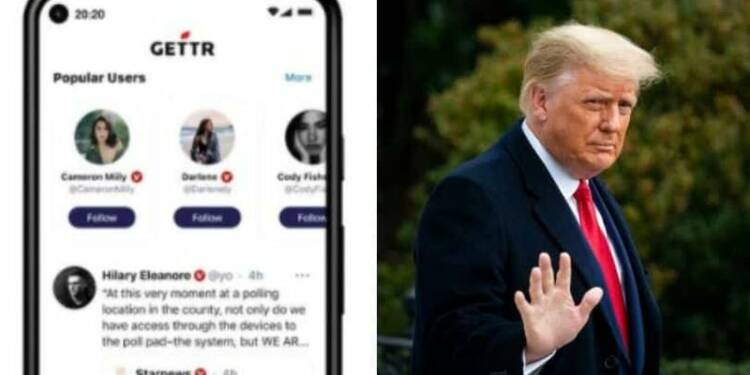 Former President Donald Trump has to be the most pronounced example of how the Big Tech can silence even the powerful people as well as sideline an entire narrative, de-platforming someone who represented a large part of the USA. On July 1, former US President Donald Trump’s team launched GETTR App, a new social media site billed as an alternative to social media heavyweights.

While the launch was discreet, the introduction of the Gettr app quickly caused debate over whether it was Trump’s long-promised quest to provide his supporters with their own social media or simply another step towards his next attempt to ‘Make America Great Again’ alternative to main platforms.

GETTR has existed as a Chinese language social media network linked to Guo Wengui and this app created by the exiled Chinese billionaire was unveiled as a new platform by former Trump adviser Jason Miller on Thursday.

The aim of the website GETTR is described as ‘fighting cancel culture, promoting common sense, protecting free expression, confronting social media monopolies, and building a true marketplace of ideas.’ According to Politico, the GETTR app is now in beta testing and will be formally launched on July 4 at 10 a.m. (local time). The platform is run by Trump’s former spokesperson Jason Miller, who confirmed the news to the media via text message.

Need of the GETTR App

A couple of months after being unceremoniously de-platformed from voicing his opinion on left-leaning Silicon Valley-based tech companies like Twitter, Facebook, Instagram and YouTube, Donald Trump is set to make his comeback, albeit on his own terms and his own independent social media platform. Trump’s spokesman, Jason Miller had confirmed back in March, in an interview with Fox News that the former President could be seen in his new avatar in the coming months.

The monopolistic practices can only remain till they do not make large swaths of people feel left out of the ambit. And this is exactly what Big Tech has succeeded in doing with constant censoring of conservative voices, which was epitomized by the suspension of the then President of the USA, Donald Trump’s accounts which were followed by his outright banning from social media platforms. However, Trump joined video platform Rumble on Saturday, the same day he took the stage at a campaign-style rally in Ohio.

According to Trump’s spokeswoman Liz Harrington, joining Rumble is an addition to and not a replacement for the former President’s ambition to launch his own platform. Trump has not provided any details about the prospective platform, which he shut down earlier this month after it was established. “It is a great way to reach the American people in a time of unprecedented assault on free speech in our country by Big Tech tyrants,” Harrington said in an email to Reuters.

GETTR allows users to post longer messages with up to 777 characters. Miller said GETTR will also allow users to post ‘clearer pictures’, post videos that are up to three minutes long, and have the ability to edit the videos within the app. Miller told Fox News that upon signing up for GETTR, users will have the option to “import their existing tweets into this new platform.”

“You can import these tweets so that your hard work, creativity, and intellectual property comes with you,” Miller said, noting it is a “one-time option upon creating your account,” and saying that the import does not link users back out to Twitter. “They are not publishers, they can’t have it both ways,” he said. “You can’t say we have a publishing exemption, but you can’t do anything with your own intellectual property. The rules are very clear, you own your tweets and you own your posts.”

As per a Politico report, a Twitter user named Dicky Zhang, whose account identifies him as connected to G-TV and GNEWS, also reminded his followers that they needed to back up their GETTR accounts. “GETTR App will officially be launched on July 4th,” he tweeted in English on June 29. “In order to build it into a multilingual & international platform, we will clear all the data on the platform on June 29th, Eastern US Time, including posts, photos & accounts. Sorry for the inconvenience. Save important information pls.”