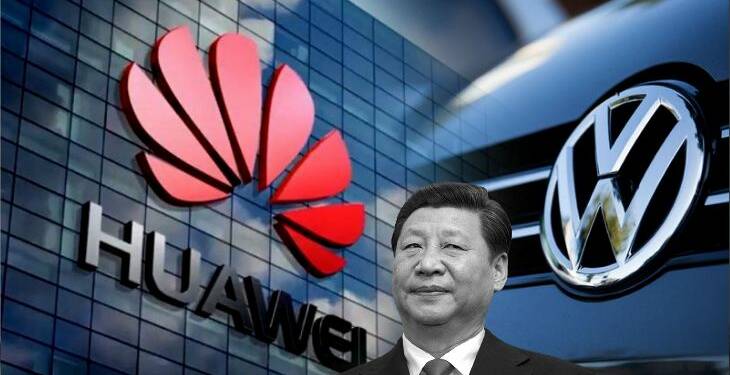 Germany has been dilly-dallying on the issue of China for quite some time now. The free world order, with a few exceptions, recognises China as the biggest threat which has come to face democracy throughout the world. Chinese territorial expansionism is most definitely underway in the Indo-Pacific; however, its neo-colonial fantasies are hardly restricted to its mere neighbourhood. China seeks world domination, and although Germany, earlier this year, took steps to truly counter China and push back against its colonial ambitions, its leading auto company – Volkswagen is in no mood to abandon China.

China has used Huawei as a premier tool to establish its presence around the world. Huawei is today considered a national security risk by many countries, including the United States and its allies. Germany, therefore, should have ideally been fighting Huawei as well. In fact, in April, German lawmakers even passed tougher 5G security legislation. The new IT Security Law 2.0, approved by the Bundestag, restricts the role of “untrustworthy” suppliers of 5G technology and requires telecom operators to notify the government if they sign contracts for critical 5G components. It also gives the government powers to block them.

Volkswagen seems in no mood to remain in sync with its country and the larger ideals of democracy and freedom. It is almost like it wants the Chinese Communists to dominate the world. Therefore, in a shocking development, Huawei Technologies has inked a deal with the Volkswagen Group and a supplier that will see its wireless technology used in 30 million VW Group models.

Volkswagen has provided Huawei with what is its largest deal in the automotive industry. In a statement, Volkswagen said, “We welcome that a leading ICT (Information Communication Technology) company has granted one of our suppliers a license to standard-essential mobile communications patent. This licensing in the supply chain is a model of how the increasingly close cooperation between the mobility industry and the information and communications industry can succeed.”

According to Carscoops, the licensing deal will provide the German automaker with access to Huawei’s 4G technologies and patents that are required for features like advanced driver-assistance systems and infotainment displays. This is Huawei’s largest deal it has reached in the automotive industry as it looks to expand its business.

Volkswagen is a much-preferred car in the free world – countries in Europe and America are where the company’s cars are a big hit. Volkswagen vehicles are well assembled, safe, well equipped, and cheap and have good performance levels. In 2020, the company sold some 2.8 million units. In the year preceding it, when the pandemic did not affect car sales and the automobile industry, Volkswagen had sold 3.4 million units. However, its association with Huawei, and by implication, the CCP, can have devastating effects on the company.

Read more: Angela Merkel, the discredited queen of the fallen kingdom Germany is going to pay dearly for her arrogance towards India

China is very selective in giving foreign companies and conglomerates access to its domestic markets, and Tesla and Volkswagen sing China’s tunes only for this reason. They are one of the few lucky auto companies which China has allowed access to its markets, but then again, China makes copies of western car models and undercuts the same companies that love it so much. Only this year, popular Chinese car brand Ora, owned by China’s Great Wall Motors showcased its Punk Cat electric vehicle at the Shanghai Motor Show. The car unveiled was completely identical to Volkswagen’s iconic Beetle.

Despite blatant Chinese plagiarism, for Volkswagen to get in bed with Huawei shows how the carmaker has not been able to give up on its fetish for totalitarians. Instead of supporting the world’s fight against China, Volkswagen is one of the companies which is protesting aggression against China. In India, for example, the Volkswagen Group has stated that doing business is not easy and that putting restrictions on the imports of critical auto components from China is a retrograde action.

As far as Germany is concerned, pressure from the free world order has forced them to put up a show of being anti-CCP. However, German companies like Volkswagen are spilling the beans, and exposing themselves as entities which are dying to get involved with China.