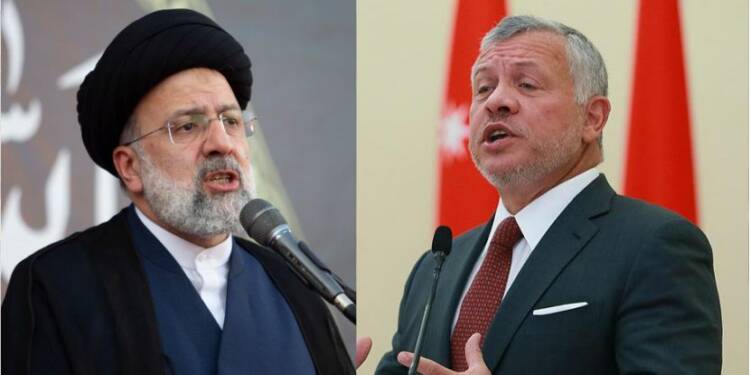 Jordan has found itself in a very vulnerable situation. And now to get protections and gain some short-term benefits, it has indirectly signed a deal with Iran via the Iranian client state of Iraq. This may very well spell its movement towards becoming a client state of Iran. Jordan’s King Abdullah II met with Iraqi Prime Minister Mustafa Al-Kadhimi and Egyptian President Abdel Fattah al-Sisi in Baghdad on June 27, 2021. All three announced a deal to work together to transport Iraqi oil via pipelines from Iraq to Jordan and then to Egypt, from where it will be sold to Europe across the Mediterranean. It is a well-known fact that Iraq is a client state of Iran and now Jordan, in a way, has agreed to transform itself into another.

As reported by JPost, this arrangement represents King Abdullah’s “coming out of the closet” with Iran. It is now official. Jordan is an ally of Iran because Iraq is under Iran’s control. The Iraqi government is a puppet state under the leadership of Iran. Exporting Iraqi oil through Jordan to Europe is essentially exporting oil controlled by Iran, which rules Iraq through Shi’ite forces and controls the country’s resources. This has been further factified by the actions of Jordanian media. A day after this happened, Jordanian state media began promoting full financial cooperation with Iran.

Jordan’s King Abdullah II has been increasing his distance from Arab allies and trying to find a new destination for friends. When Trump made an attempt to bring Israel and the Arab countries closer, Jordan’s King Abdullah II started weaponising Islamic sentiments about Jerusalem. The Hashemites felt that any agreement (deal of the century) between Saudi Arabia and Israel over Jerusalem could erode Jordan’s control over the Al-Aqsa Mosque compound.

Jordan – one of the earliest Arab countries to recognise Israel and advocate moderate Islam, is now creating hindrance in the Middle East peace process by politicising Islamic sentiments. “Iranian religious tourism will breathe life back into Jordan,” said King Abdullah’s adviser, Zaid Nabulsi, a member of the newly created ‘King’s Advisory Board.’ One million religious tourists are expected, according to government-controlled media outlets. They are expected to travel to Kerak, 120 kilometres (75 miles) south of Amman, to see the shrine of Jaffar Ibn Abu Taleb. In addition, the Jordanian and Arab press have begun discussing an Iranian proposal to build an airport in Kerak.

According to the same article, There is no doubt that Jordan is experiencing great financial difficulties as a result of COVID, corruption, mismanagement, a lack of natural resources, and particularly water scarcity. Jordan’s King believes that welcoming Shi’ites will save his country from these challenges. But, as previously stated, this will be a double-edged sword moment for the Middle Eastern country, and Jordan will soon plunge into darkness, much like Lebanon, Syria, Iraq, and Yemen. For Israel, there is a danger of opening a front from hell, sending drones, or even excavating tunnels in areas bordering Jordan that will fall under the Shi’ite authority.

These concerns from Israel and Arab states are legitimate as one already knows the state of Iraq as a client state of Iran and what has become of the country. While Jordan may find it lucrative to get protection and some other short-term benefits by allying with Iran, this will lead to the country becoming another client state of Tehran.