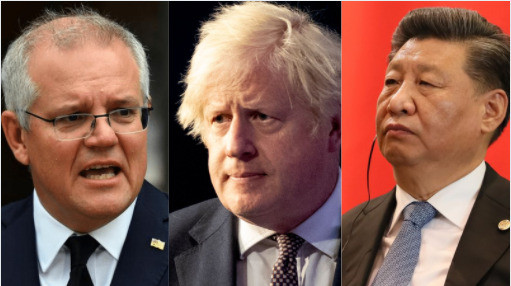 The influence of the Chinese Communist Party ( CCP) in many western countries is something which has not been looked at for a very long time, and while the military bravado may sound like a good strategy to make China ease up on its aggressive diplomacy, it is not going to solve the increasing dependence of these western countries on Beijing. The United Kingdom is one of these countries, and it is now “strategically dependent on China for 229 categories of goods.” 57 of them have vital national infrastructure applications. In other words, China holds all the cards when it comes to procuring minerals that are vital to British lives.

The UK needs to understand the problem at hand and Prime Minister Boris Johnson needs to learn a thing or two from his Australian counterpart to find ways to decrease Chinese influence within the country. In addition to the strategic dependence, China also controls Britain’s universities as they depend on the Chinese students taking admissions. The real threat arises when the nationalist Chinese students create a scenario where free speech and criticism of CCP is stifled.

Chinese influence in academics is becoming a “huge problem” for UK universities, according to Conservative MP Alicia Kearns. Ms Kearns, a member of Parliament’s Foreign Affairs Select Committee, told Express.co.uk that she is concerned about China’s attempts to limit free debate on human rights problems such as the abuse of the minority Uighur community in Xinjiang.

Ms Kearns told Express.co.uk: “What is ironic about our universities and this is an issue across the piece is that our universities are meant to be campuses of free speech. Of debate, of dialogue, of let me be the Devil for a moment and suggest something else. We have got a massive problem on our campuses where we are self-censoring.”

While on May 22, history was made, when the UK Carrier Strike Group embarked on its first-ever mission, military browbeating is not something that will fill the holes within the country. With “nine ships, 32 aircraft, and 3,700 personnel,” as Seapower magazine reported, this was the “largest concentration of maritime and air power to leave the U.K. in a generation.”

Read more: Morrison govt comes out to protect Pro-Democracy Chinese students in Australia who were on CCP hitlist

There is a thing or two that can be learnt from the way in which Australia has tried to curb the Chinese influence. Canberra realises that the more opportunity it will provide the pro-democracy Chinese students to express themselves and write what they feel like, the more realities of mainland China will reach the world and the freedom of speech as an idea will reach the mainland too. And to see this succeed, the Morrison government has decided to protect the pro-democracy students as the Universities and concerned authorities have come up with the idea to allow students to submit written assignments under pseudonyms.

Thus, the UK should realise its position and curb the Chinese influence before it gets too large to even put a hold on it. The UK must understand that it is the sovereignty of their nation which is at stake and in the era of globalisation, everything cannot be solved by trying to browbeat another country via military intimidation.