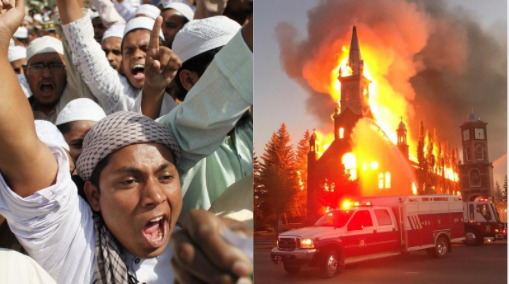 Canada is going through a rough patch. Its economy is not in tatters just yet, nor does Canada face any military or security threat. Sure, Canada is gripped with an unprecedented woke pandemic, and the liberal domination prevalent in the North American country can turn anybody’s stomach upside down. However, these are the least of Canada’s problems now. Even China bullying Canada on a daily basis appears to be a minuscule problem when seen in the context of what has been unravelling in the country of late. Canada’s past has come to haunt it. Canadian society is getting divided.

Heartbreaking scenes have been unfolding in Canada. With the discovery of mass graves of indigenous children in Canada, the reality of a colonial cultural genocide has been brought to light. The indigenous people of Canada have for years on end been saying that their children were forcefully taken by the Church and government and indoctrinated them with hatred for pagan culture. Now, with the discovery of mass graves, their claims have proven to be true.

In the last few weeks, three major burial sites have been discovered in different parts of Canada. On June 30, the remains of 182 children were found in mass graves close to former St. Eugene’s Mission School in Cranbrook. Earlier, two other mass graves were unearthed – one with 215 people in Kamloops was found on May 27, and another with 751 people in Saskatchewan was discovered on June 24. The children found in these mass graves were as young as three years old.

From the late 1800s until 1996, Canada forcibly removed 150,000 indigenous children from their homes and kept them in institutions run by church staff for “assimilation programs”. Here, the children were subjected to all sorts of cruelties. The staff cut off their long hair and forbade them from speaking their languages or practising their cultures. These young children were physically and sexually abused. They were tortured in electric chairs, starved, and put through unauthorised, random and lethal nutritional experiments. Those who could not survive the torture were dumped into mass graves. Canada’s past is horrifying.

Now, as Canada faces its cruel past, some forces are trying to milk the opportunity to grow their own kind in the country. We are talking about Islamists here, who are strategically using the opportunity in this shocking phase to their own benefit. Already, churches in Canada are being burnt down, attacked and vandalised. At least 9 churches have been burnt in Canada over the past few days. The Christians of today are being victimised for the crimes of those who preceded them.

Islamists in Canada are using the Friday prayer ceremonies to add fuel to fire. Last Friday, 75 Imams across Canada offered condolences and “expressed solidarity” with Indigenous people following the discoveries of unmarked graves. The Canadian Council of Imams and Justice for All Canada led the coordinated effort to raise awareness on the matter. In a statement, the Imams wrote, “The discovery of hundreds-upon-hundreds of graves of innocent children — stolen from their families, abused, tortured and starved in the name of European imperialism — has left us numb with pain and shame.”

Aarij Anwer, Imam of the London Muslim Mosque in Ontario said he felt compelled to act on a human level and because his “faith instructs him to stand with the oppressed, and against the oppressor.” He added, “It should disgust everyone who reads about this.” Anwer also said many Canadians still do not realize the level of atrocity that was committed in these institutions.

Read more: Trudeau is Jinping’s favorite plaything as he uses Canada’s dark past to get his way around

At a subliminal level, the Islamists are fanning hatred among Canadians for Christianity, and perhaps trying to convince people to convert to Islam. Islamists have entered into a dirty alliance with liberals in Canada, and are furthering their toxic, theological agenda very sophisticatedly. Canada risks the chance of being run over by Islamists very soon – owing to its open doors policy for just about anybody. And Canada is hardly alone. Immigrants and refugees from the Middle East are pouring into Western countries, but are refusing to assimilate with the existing cultures of their new homes.

Instead, they seek to impose their own culture on people living in countries like Canada, Sweden, Norway, Belgium and even the United Kingdom. What they accuse the Christian ancestors of Canada of having done will be done by them as well – when the demography supports them.

Surely, Canada must confront its past, and atone for its crimes against humanity. However, it must maintain an arm’s length from Islamists – whose sole agenda is to proselytize as many people as humanly possible.