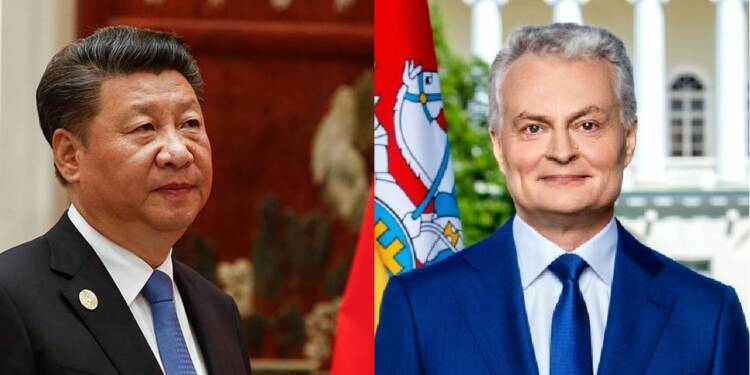 The situation in eastern Europe has totally turned upside down and countries one after another are leaving China-led economic development block which was influencing and undermining the decisions and authority of the European Union. Among them is the small Baltic nation of Lithuania, which has changed its diplomatic tone 180 degrees and is giving China a real headache. Lithuania on Thursday (July 1) announced plans to establish representative offices in Taiwan and several other Asian countries, with a view to increasing its export markets. This news in itself is unprecedented, given China is trying hard to make few remaining countries break diplomatic ties with Taiwan.

Lithuanian Foreign Minister Gabrielius Landsbergis emphasised the necessity of fostering democracy and freedom in other countries while increasing Lithuania’s exports. Focus Taiwan reported that he made the statements at a virtual meeting attended by 62 Lithuanian officials posted in foreign missions and international organisations. Lithuania’s diplomatic agenda prioritises establishing a footprint in the Indo-Pacific region through trade. According to Landsbergis, preparations are underway to open offices in Taiwan, South Korea, and Singapore, in addition to an embassy in Australia.

The current Lithuanian administration, which took office in October of last year, has continued to develop bilateral ties with Taiwan, announcing last month that it would send 20,000 doses of AstraZeneca’s new crown vaccine to Taiwan. These developments are coupled by respective detachment in its diplomatic and country to country relations with China. Lithuania withdrew from the 17+1 cooperation mechanism, which includes China and Central and Eastern European countries, in May of this year, stating that it fears the proposal will fracture the European Union.

The plan, according to the foreign minister, is not aimed to fight China, but rather to reach out to the Indo-Pacific area in the national interest. It is believed that the approach will allow the country to avoid becoming overly reliant on China’s economy, which would put it under political pressure, he said.

Here‘s my take on Lithuania‘s policy towards Taiwan & China, as well as establishing closer economic & trade relations between #Lithuania and #Taiwan @dwnews. We must strive to build stronger economic relations around the globe. Thanks, @WilliamYang120! https://t.co/GIacpxf1bV pic.twitter.com/Jgy3eRL6yb

Lithuania’s Economic and Innovation Minister Aušrinė Armonaitė hopes to open a Lithuanian trade office in Taiwan in October or November, according to a report from Germany’s public broadcaster. According to the German tabloid, Armonait stated that the decision to open a trade office in Taiwan is not solely about trade, but also shows the friendship that Taiwan and Lithuania developed in the early 1990s.

According to the report, Armonait said it’s crucial not to disregard what’s going on in Hong Kong, Taiwan, Tibet, and other parts of China. “Some of the news that reaches us doesn’t go in line with human rights approaches,” the report quoted her as saying. “This is something we can’t ignore and that’s why we are trying to build more economic relations with a diverse range of countries and regions,” she said.

Meanwhile, Joanne Ou, the spokesperson for Taiwan’s Foreign Ministry, said on Thursday that the ministry welcomes Lithuania’s ambition to increase cooperation with Taiwan, including its plan to open a trade office in Taiwan and reform the required laws to make that possible. All these developments are giving real headache to China, given it can create a domino effect and other Eastern European countries might follow.