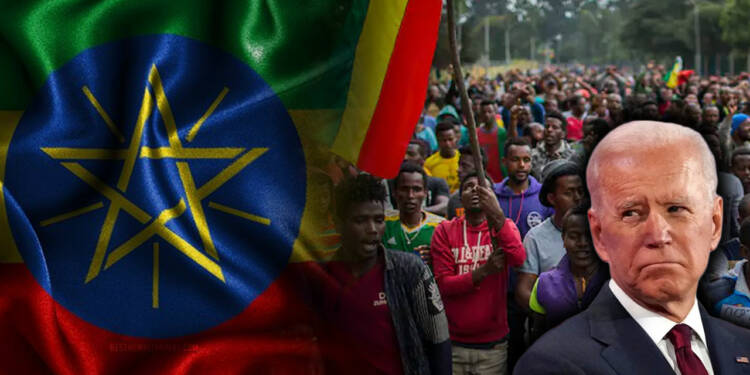 Ethiopia is currently facing a rebellion in its Northernmost region, Tigray. The rebellion is led by a group called the Tigray People’s Liberation Front, or the TPLF. But the Biden administration claims that Ethiopia’s forces and officials are committing human rights violations, and therefore, the US must get involved with a ‘humanitarian intervention’. The ‘rebellion’ has now reached a stage of a civil war. And this civil war is beginning from Ethiopia’s Amhara region, where the Amhara people are getting ready to repulse attacks, and even launch offensives against the invading TPLF.

This comes after Ethiopian Prime Minister Abiy Ahmed abruptly pulled central government troops out of most of Tigray last month, citing a unilateral ceasefire that the TPLF mocked as “a joke” designed to justify his forces’ retreat. Now, Reuters has reported a spokesman for the Amhara regional government as saying that the authorities there were rallying their own forces for a counter-attack against Tigrayans.

Amhara spokesperson Gizachew Muluneh was quoted as saying by the region’s state-run Amhara Media Corporation, “Amhara militia and special forces have been systematically trying to defend but now our patience has run out and as of today we have opened an offensive attack.” On Tuesday, the National Movement of Amhara, a major regional political party, called on irregular volunteer militia – known as Fano – to mobilise and prepare for fighting with the TPLF.

The Tigrayans and Amharas are two of Ethiopia’s largest ethnic communities, and a battle between them over territories is nothing short of a civil war. Ethiopia’s northernmost region of Tigray has been facing insurgency since November last year. Ethiopia blames the Tigray People’s Liberation Front for launching attacks on Ethiopian forces. The United States is alleged to have been supporting the TPLF for the last 20 years, and now, Joe Biden is using the excuse of supposed human rights violations by the Ethiopian troops to intervene in the strategic country.

However, the people of Amhara rising against the alleged US-supported TPLF promises to spill water over all such interventionist ambitions of the Biden administration. Now, if the Biden administration intervenes, it would effectively be siding with one ethnicity in Ethiopia – that is the Tigrayans, while supporting the TPLF’s fight against the other largest ethnic group – the Amaharas. This will not just be a regional suicide for the United States, but also a matter of global shame.

Read more: Obama had set the Arab Spring in motion, Biden is starting the Horn of Africa spring

The Amhara people are willing to fight the TPLF – which is eyeing the capture of Western Tigray, considered by the Amharas as their own historic homeland which they say will never be given up. The Amhara people fought alongside Ethiopia’s central forces against the TPLF. However, since the central troops were recalled by the Ethiopian government, the Amharas have been left to fend for themselves, even as the TPLF is continuously capturing more and more territory. Since Prime Minister Abiy’s abrupt withdrawal on June 28, the TPLF has pushed steadily outwards, recapturing most of Tigray. Its forces retook Alamata, the main town in the south on Monday and pushed across the deep ravine of the Tekeze River to take Mai Tsebri from Amhara control on Tuesday.

A spokesman for the Tigrayan forces told AFP the rebels would “liberate every square inch of Tigray.” The Biden administration in the US, meanwhile, has raised concerns about ethnic cleansing in western Tigray, where it has accused Amharan ‘forces’ of expelling thousands of people from the land they claim rightfully belongs to them.

Ethiopia is an assertive country, and it is close to both Russia and China – which is the case with most countries in the region. Meanwhile, Iran too has its interests in the Horn of Africa and wants to have a significant influence over Somalia and other countries so as to secure Yemen in the event that Tehran is able to decisively win the ongoing war between Saudi Arabia and Houthis there.

Similarly, the US also wants to have a presence all across the Horn of Africa – with an eye on Yemen and also to dominate the Bab-el Mandeb Strait. The Bab-el Mandeb Strait ultimately connects the Gulf of Aden and the Red Sea and ensures access to Arab countries. This makes Ethiopia a vital location.

The US wants to establish its presence in Ethiopia, and address growing Russian and Chinese presence in the region. However, the U.S.’ modus operandi is blatantly wrong. The US must realise it cannot effectuate regime changes in countries it has strategic interests in by pushing the people into a civil war. Close to China and Russia or not, it is simply inhumane for Ethiopia to be pushed into a civil war while the US continues supporting the TPLF – due to which the war is taking place in the first place.

While the Biden administration continues with the Democrats’ legacy of waging unnecessary and heartless wars on foreign soils, the people of Ethiopia are rising against such tyranny. They are willing to lose their lives, as long as they can protect their land from internal and external enemies.

Israel’s new plan to encircle Iran from all sides