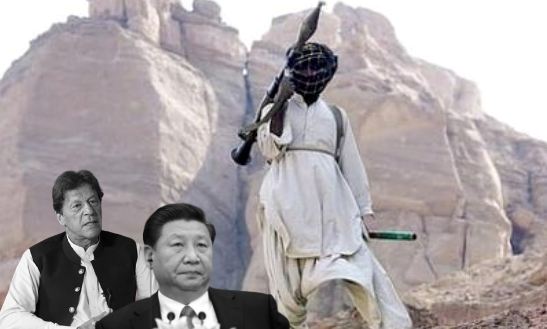 China under the China Pakistan Economic Corridor (CPEC) has invested a fortune in Pakistan. While many analysts were concerned about the prospects of a strategic China in the Arabian sea, they totally missed the fact that China was investing in a failing state. Now as Xi Jinping finds his CPEC project in danger, China and Pakistan are on their knees to stop Baloch separatist. Six years after Pakistan’s previous attempt to reconcile with estranged Baloch leaders failed, Prime Minister Imran Khan has announced a new initiative aimed at achieving Baloch peace.

The tentative steps to initiate peace talks with Baloch separatist rebels in its southwestern Balochistan province, home to the Chinese-run deepwater port of Gwadar, comes amid the threat of insurgencies fuelled by civil war in neighbouring Afghanistan. Ethnic Baloch nationalist politicians and exiled rebel leaders are sceptical of Khan’s move, believing that Pakistan’s powerful military will reject any serious concessions provided by his government. The chances that this is just a diversion tactic to make sure that the pressure on the CPEC projects decreases until the Pakistan government can come up with a more workable strategy to deal with the rebels.

Non-Baloch people have also suffered, with some armed groups not even sparing impoverished Seraiki-speaking labourers working on road construction projects. Aside from security officers, professors, doctors, and educated white-collar professions have also been targeted. The government’s retaliation has been ruthless. Hundreds of Baloch separatist youth have vanished without a trace, and countless remains have been discovered discarded with signs of terrible torture, as if this, too, was a not-so-subtle message to those harbouring pro-Baloch separatist sympathies.

However, Balochs have stopped short of rejecting Islamabad’s move to end the conflict, which has raged in many parts of sparsely populated Balochistan, a critical region for China’s $60 billion Belt and Road Initiative to improve global connectivity. Instead, they’re waiting for the government to clarify the parameters of and participants in the upcoming debate.

As reported by multiple agencies, on Wednesday, nine Chinese workers were among 13 people who died, when a blast on a bus they were travelling on sparked a fire, sending the vehicle plunging into a ravine. A local government official told AFP that a further 28 Chinese nationals were injured. No group has taken responsibility for the attack. While Pakistani officials indicated they were looking into the incident, Chinese officials claimed it was an attack on their citizens. Engineers, surveyors, and mechanical staff were on their way to the World Bank-backed Dasu Hydropower project in northwest Pakistan’s Khyber Pakhtunkhwa region.

Some experts speculated that Khan’s decision to engage Baloch separatists might lead to Chinese envoys being sent to negotiate with Baloch political figures exiled in Britain and Switzerland. During an unsuccessful attempt at rapprochement in 2015, when the CPEC was inaugurated, Beijing was alleged to have communicated with rebel leaders at Islamabad’s request.

The terrorists have launched strikes with increasing frequency and intensity from camps in southern Afghanistan and Iran, despite Islamabad’s deployment of 60,000 troops. They’ve been concentrating their efforts in southern Balochistan, where CPEC roads are being built to connect Gwadar port to the national highway network. Xi Jinping desperately wants to save CPEC and this has brought Imran Khan in a situation where he needs to make sure the project does not fail. While it will lead to the acceleration of Pakistan’s failure as a country, but it will also be a major embarrassment for China’s BRI.