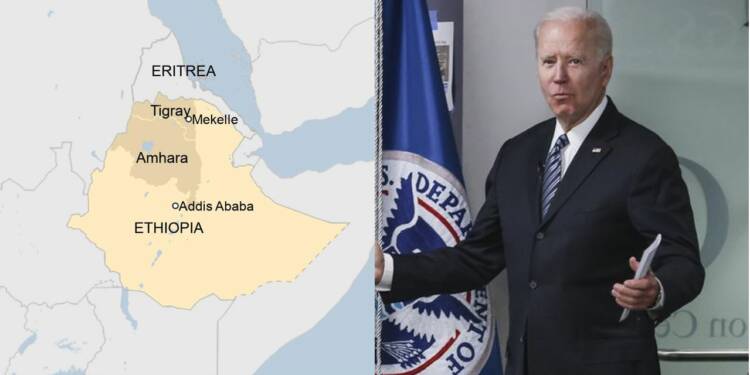 It is only for so long that a people can take foreign interference in defining their country’s future before they take the last stand. Similar development seems to have occurred in Ethiopia as three more Ethiopian regions are sending soldiers to reinforce the national army in its fight against forces from the northern region of Tigray, regional officials said, widening a conflict that has so far largely affected the north. Oromiya, Sidama, and the Southern Nations Nationalities and Peoples’ Region officials announced their forces had joined the Ethiopian National Defence Force (ENDF), which retreated from much of Tigray late in June.

The rebellion is led by a group called the Tigray People’s Liberation Front, or the TPLF. But the Biden administration claims that Ethiopia’s forces and officials are committing human rights violations, and therefore, the US must get involved with a ‘humanitarian intervention’. The ‘rebellion’ has now reached a stage of a civil war. And this civil war is beginning from Ethiopia’s Amhara region, where the Amhara people are getting ready to repulse attacks, and even launch offensives against the invading TPLF. This is becoming a more and more obvious prospect as other regions are also sending their forces to back the National efforts to end this madness.

The Tigrayans and Amharas are two of Ethiopia’s largest ethnic communities, and a battle between them over territories is nothing short of a civil war. Ethiopia’s northernmost region of Tigray has been facing insurgency since November last year. Ethiopia blames the Tigray People’s Liberation Front for launching attacks on Ethiopian forces. The United States is alleged to have been supporting the TPLF for the last 20 years, and now, Joe Biden is using the excuse of supposed human rights violations by the Ethiopian troops to intervene in the strategic country.

“We have already deployed our special forces and they will join the Ethiopian National Defence Force (ENDF). Our people will also support us with materials. It is the Ethiopian National Defence Force (ENDF) that is in charge where the special forces will be deployed,” said Oromiya Region spokesperson Getachew Balcha. “If needed we will deploy more,” he told Reuters. The Southern Nations Nationalities and Peoples’ Region also confirmed it sent soldiers.

“Close to 300 to 400 special forces were sent this week. I think they will be deployed on the western front,” said an official from the region’s communications office on condition of anonymity. A Sidama official who did not want to be named also confirmed the region’s forces had gone to reinforce the national army.

Ethiopia is an assertive country, and it is close to both Russia and China – which is the case with most countries in the region. Meanwhile, Iran too has its interests in the Horn of Africa and wants to have a significant influence over Somalia and other countries so as to secure Yemen in the event that Tehran is able to decisively win the ongoing war between Saudi Arabia and Houthis there.

The US wants to establish its presence in Ethiopia, and address growing Russian and Chinese presence in the region. However, the U.S.’ modus operandi is blatantly wrong. The US must realize it cannot effectuate regime changes in countries it has strategic interests in by pushing the people into a civil war. And this is already causing repercussions as the developing situation will make sure that Ethiopia’s resistance may soon deliver an embarrassing blow to the US.