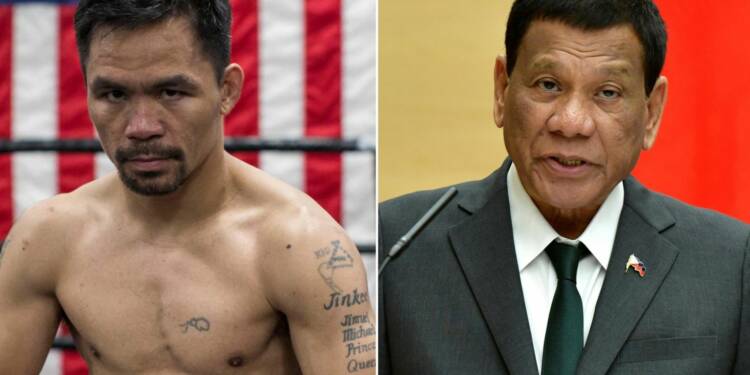 Duterte‘s supposed successors have found their match in Manny Pacquiao

The politics in the Philippines is becoming more and more complex and interesting. While President Rodrigo Duterte has for a long time seemed okay with the slow erosion of the sovereignty of the Philippines at the hands of the Communist Party of China, however, with flip-flop in both his words and commitment regarding the sustained offensive by Beijing, the people of the Philippines are looking for options of an alternative to Duterte and his bloc. And now it seems, the President and his supposed successors have found their match in Manny “Pacman” Pacquiao, the ambitious boxer-turned-politician.

Manny Pacquiao, a Filipino senator and boxing champion, was voted out as the country’s ruling party’s head on Saturday, weeks after publicly criticising President Rodrigo Duterte’s stance on China and his anti-corruption record. He is considered as a possible successor to Duterte in the next year’s presidential election.

He has long been one of the president’s most ardent fans, supporting his violent anti-drug campaign and his bid to reinstate the death penalty. However, their relationship deteriorated last month after Manny Pacquiao slammed president Duterte’s moderate attitude on Beijing’s aggression in the South China Sea and claimed he was investigating bribery in the administration.

Is Manny Pacquiao running for president?

President Rodrigo Duterte is ineligible to run for President again in the 2022 polls because he is term-limited by the 1987 Philippine Constitution. Duterte’s ouster could nullify his embrace of Beijing which has endangered historic ties between Manila and Washington, given the growing anger against Chinese incursions in the South China Sea. And with the emergence of Manny Pacquiao for the post of president, his anti-China stance is giving China a headache.

In recent months, the 42-year-old Filipino prizefighter legend Manny Pacquiao, who is presently serving his first term as a senator, has quickly shifted from a dependable and unwavering ally to one of the president’s most outspoken detractors. Although the Duterte administration makes anti-China pronouncements, they are usually only lip service.

When Chinese vessels enter Philippine waters, such remarks are usually intended to serve as deterrents. Duterte, on the other hand, intends to keep his China pivot alive. Duterte’s behaviour may cause problems for his party, the PDP-Laban, in the 2022 presidential elections.

Duterte has finally met his match in ‘Pacman’ for president post

The party should focus on limiting the spread of the highly dangerous Delta coronavirus type, Manny Pacquiao stated in a statement. “It’s up to Cusi and others to believe that politics is more essential now.” The eight-division champion is in the United States to prepare for a welterweight title fight, but he has yet to declare his candidacy for president. In December, he was sworn in as the party’s president.

The rise of a consistent anti-China voice in the political echelons of the Philippines is bad news for the plans of Xi Jinping and the Communist Party of China. And the fact that he is poised to become a very prominent political voice, the whole of the Philippines anti-China block will shift en-mass to his corner making Beijing’s political manoeuvring in the area difficult with every passing day.