Russia, with Mongolia’s assistance, is going to kick China out of the Korean peninsula 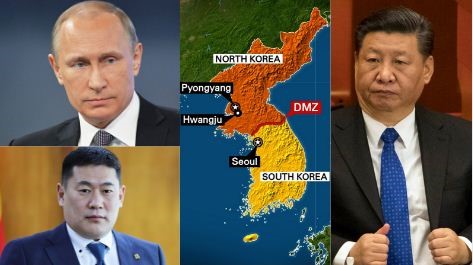 The importance of Asia’s far East is only going to increase with the increased navigability of the Arctic Ocean. This is something Russia understands very well. Russia realises that China is also interested in gaining influence in the region, and thus it is taking some preemptive steps. Russia has a need to expand its influence in the entire North East Asia in general and Korean Peninsula in particular. In its efforts to do the same, Moscow, with Mongolian assistance, is going to kick China out of the Korean peninsula.

In its efforts to consolidate the region Putin is hitting back at Xi Jinping and liberating Mongolia little by little. Sandwiched between Russia in the north and China in the south, Mongolia could soon serve as an important transit country for Russian natural gas and its related supply chains and its soft power diplomacy vis a vis Korean peninsula can be of great utility to Russia. The examples of infra projects can be an obvious confirmation of the same. When finished, the Soyuz Vostok gas pipeline will connect Russia’s ‘Power of Siberia 2’ with Mongolian territory.

Since the days of acting as a mediator during the Korean war, Mongolia has acquired the trust of North Korea. Despite Mongolia’s move to democratic administration and a liberalised economy, the two countries’ historic relations, which date back to 1948 and are founded on their shared communist ideology, have remained strong. Mongolia might serve as a window to the outside world for North Korea, allowing it to learn from its experience and grow economically.

On the other hand, Mongolia has also maintained close ties with South Korea since the two countries established diplomatic relations in 1990. Relations with Seoul have expanded into comprehensive collaborations in numerous domains, including politics, economics, and culture, as part of Ulaanbaatar’s Third Neighbor policy. Politically, the two countries have attempted to increase diplomatic cooperation by convening an annual ministerial meeting to discuss foreign policy issues, including Ulaanbaatar’s support for the Korean Peninsula peace process.

Russia wants to utilise Mongolia’s goodwill to increase its influence in the Korean Peninsula. By doing so it also wants to keep a check over the ever increasing size of China in the region, which can be a problem going ahead. China is the second most powerful country in the world, after the USA.

The Chinese ruled Mongolia during the era of the Qing dynasty but recognized their independence in 1946. Since then, despite being independent, it has been heavily dependent on China for its trade and commerce. The nation seems like another province of China, whose central authority keeps using its diktat on the former’s government. However, now Russia is trying to bring the country out of the shackles of Chinese influence and geographical dependence.

Read more: Mongolia has long lived under China’s shadow, but Russia is liberating it bit by bit

Mongolia’s diplomatic achievements have shown how small governments can leverage soft power to increase their foreign policy clout. Mongolia’s soft diplomatic mediation efforts through the UBD have helped to thaw a frozen conflict, particularly with North Korea, and have opened the way to peace. Mongolia has quietly worked to resurrect the Korean Peninsula’s sagging security conversation, strengthening regional cooperation and raising Mongolia’s status as a foreign policy player in the process.

It is this soft power fuelled potential of Mongolia which Russia wants to utilise and make sure that it can somehow expand its influence in the Korean peninsula and at the same time, kick China out.

Russia’s regional interests include a desire for the Korean Peninsula to remain open to economic opportunities for the sake of growing the Russian Far East, as well as a desire to maintain the status quo in North Korea. Russia wants to make sure that its interests are not jeopardized by China’s megalomaniac tendencies. And realising this, it wants to use Mongolian assistance to kick China out of the Korean peninsula.