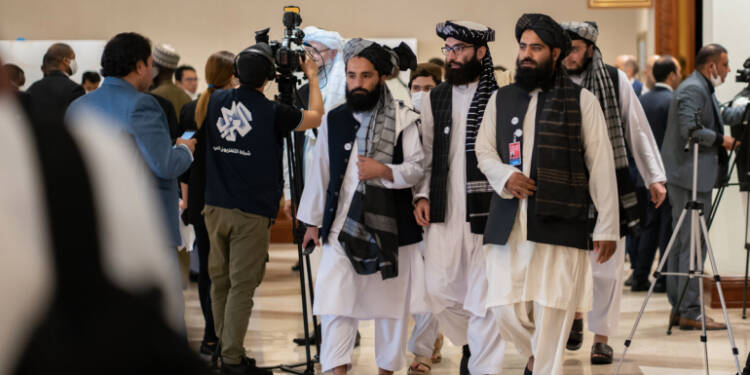 Over the past few weeks, the media has been portraying the Islamist terror organisation of Taliban of Afghanistan as a prominent and powerful political entity. Its militant members are being mainstreamed as “diplomatic officials” while the heart-wrenching violence perpetuated at the hands of the Taliban is being brazenly white-washed by the global media. After having imbibed all the propaganda-glutted coverage by these slanted media organizations, one might presume the Taliban to be a shrewd battle-hardened force, ostensibly calling the shots in the war-ravaged country.

The truth, however, is the exact opposite. Considering Taliban’s violence-ridden territorial strides in the country, along with the turbulence that it has propelled into the region, the Taliban stands on the verge of inviting mammoth sanctions from all over the world, which could severely impair Taliban’s standing in the intra-Afghan talks and power-sharing negotiations with the civilian government. From India to Russia and from China to Iran, Afghanistan Taliban is desperately rushing to win confidence in region’s major capitals to prevent these countries from reining in Taliban’s geo-strategic advancements.

Read More: Terrible news for China and China backed Taliban as Russia creates a military alliance for a major assault

Afghanistan Taliban, as it claims, governs 85% of Afghanistan’s territory as of today, and the battle is still going on in the dozens of provinces currently held by the government. Seemingly, the country stands at the brink of falling prey to Taliban’s Islamist establishment. Despite that, the Afghanistan Taliban is forced to talk mouthful of its political commitments towards ending the decades-long conflict in the country. On Sunday, the leader of the Taliban Maulawi Hibatullah Alhundzada expressed his willingness to reach a political consensus during a meeting with the high-level Afghanistan government delegation in the gulf state of Qatar.

Alhundzada said, “In spite of the military gains and advances, the Islamic Emirate strenuously favours a political settlement in the country, and every opportunity for the establishment of an Islamic system.” He claimed that Afghanistan Taliban commanders have been ordered to treat Afghan civilians with utmost care. He also promised to support education in the country as soon as Afghanistan Taliban is entrusted with the power, stating that “Islamic Emirate will … strive to create an appropriate environment for female education within the framework of sublime Islamic law.”

Earlier, the Taliban had dispatched its delegations to Russia to assure Moscow of stability in the region. Afghanistan Taliban spokesman Mohammad Sohail Shaheen had said that their delegation came to Moscow to “assure that we won’t allow anyone to use the Afghan territory to attack Russia or neighbouring countries.” A Taliban rule in the country could prompt thousands of Afghans to seek refuge in the neighbouring states, risking an outbreak of yet another humanitarian disaster in the war-torn country.

A Taliban-ruled Afghanistan would become a pariah in the region. Russia is already worried about the prospects of violence getting spilled across the border. Russia is prepared to activate a military base in ex-Soviet Tajikistan against advancing Afghanistan Taliban forces on its southern border. Also, Russia could also invoke the provision under Collective Security Treaty Organization or CSTO to help the central Asian countries in dealing with the menace at their southern borders with Afghanistan.

Taliban has been trying to gain favours from the international community as it knows everything is not a piece of cake in global diplomacy. If Taliban becomes successful in forming government in Kabul Afghanistan, it runs the risk of attracting sanctions from Western powers. The world witnessed the brutality of Taliban’s regime during its rule between 1996-2001, a repeat of which will put Taliban in a crisis in the global scenario. So, it is desperate to better relations with world powers.

Afghanistan Taliban has also tried to court the support from democratic India in order to tighten its grip over the country. However, given India’s steadfast proximity to the democratically elected civilian government in Kabul, the prospects of India extending support to Taliban look bleak as of now.

A Sunni-dominated Afghanistan Taliban would also cause uneasiness in the neighbouring Tehran, and thus the Afghan-Iranian relations would soon fall prey to Taliban’s hostility the region. Pakistan and China seem to be Taliban’s only promising allies in the region. However, the duplet would also find its hands tied when it will come to help the sanction-friendly regime in the country. China’s proximity with Taliban could invite serious implications for an already-troubled Communist regime. On the other hand, Pakistan, itself mired in poverty and terrorism, would also have nothing to offer to the sulking Talibanis.

Taliban has already had the taste of the USA’s brutal economic sanctions when it previously ruled the Afghanistan before 2001. As Taliban vigorously embarks on a campaign to establish Islamic rule in the country, it is bound to face the same fate again. Resultantly, Afghanistan Taliban is desperately running for cover to sustain its territorial and political advancements in the country, in stark contrast to what the global narrative is being set by the global media.