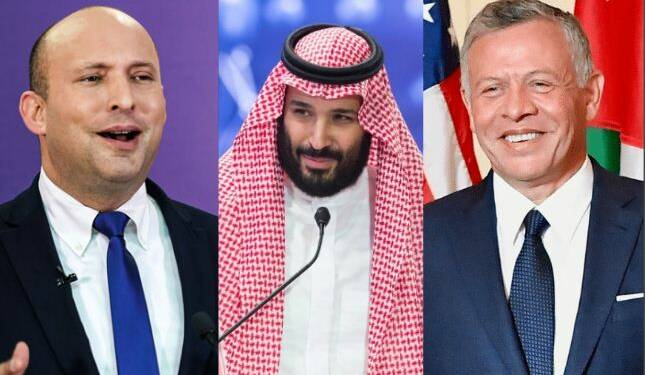 The situation in the Middle East is worsening by the day, and there is no doubt that Iran and its proxies are big players in the same. Be it the escalations in Gaza, or the current crisis of Lebanon, the one thing in common is the Islamist regime of Iran. Jordan is in the vicinity and can feel the heat of such situations and get engulfed in them. Now realising the regional geopolitics, Jordan has decided to push for the Abraham accords in the Arab world.

In an interview with CNN, Jordan’s King Abdullah II stated that he expects more Arab states to normalise relations with Israel in the future. Rather than speculate on which country may be the next to sign the Abraham Accords, the monarch stated that several Middle Eastern countries “see having a relationship with Israel as in their vested interests” because of security concerns over Iran. As there were no immediate threats from Iran that can provide a reason for the sudden support of Jordan towards Abraham accords, the possibility of the hand of Saudi Arabia in the development is of high probability.

On Iran, Abdullah adopted a diplomatic tone and separated the Iranian people and the regime while mentioning the security concerns. Expressing his country’s “legitimate concerns” about the Shiite state while also recognising the Iranian people’s historical culture, which “adds so much to the world.” Jordan has noticed an increase in Iran’s regional aggressiveness, as well as an enhancement in the country’s military capabilities, particularly in the field of ballistic missiles, according to the King.

King Abdullah is currently on a two-week visit to the United States and he’s looking to amending his country’s ties with the US previously blighted under the Donald Trump administration. When Trump made an attempt to bring Israel and the Arab countries closer, Abdullah started weaponising Islamic sentiments about Jerusalem. With President Joe Biden sitting at the helm of the affairs, the American and Jordanian relations are on the course of resuscitation. This simply means that the American administration can help Israel in toning down the Jordanian radical viewpoint of Israel.

Recently, Israel’s Prime Minister Naftali Bennett and King Abdullah secretly met in Amman, where Israel struck a deal to sell Jordan an additional 50 million cu.m. of water this year, and allow Jordanian imports to the West Bank to go up from $160 million last year to about $700m. This was followed by a public meeting between Israel’s foreign minister Yair Lapid and his Jordanian counterpart Ayman Safadi.

The increased engagement of the Jordanian King with the newly elected Israeli government and its support for further expansion of Abraham accords can only be attributed to a subtle nudge from Saudi Arabia as well as the increasingly aggressive and destabilising activities by Iran and its proxies.

This summer, Jordan is suffering from a severe water shortage. It only has 400 million cubic meters, while it needs 900 million according to the Ministry of Water. Jordan had a hard time receiving a meagre eight million cubic meters during Netanyahu’s reign. Bennett has turned to water to cool off the relationship with the Hashemite kingdom.

The relations between Israel and Jordan have seen their ups and downs. However, different factors have come into effect at the same time, be it the increased influence of Iranian proxies in the region or the drought in the country among others. Besides, as the stars were already aligning, a subtle push from Saudi Arabia seems to have had its impact as Jordan is now pushing for the Abraham accords in the Arab world.