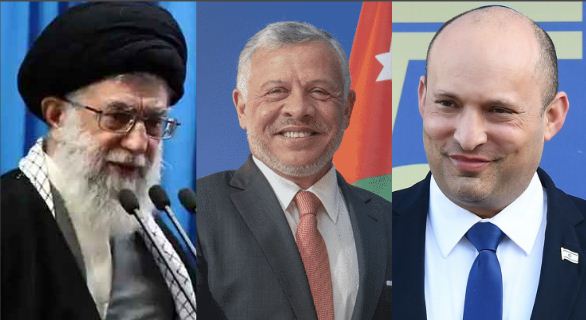 Earlier this month, when the Middle Eastern country of Jordan inked a deal with the Iranian client state of Iraq to transport Iraqi oil through its territory to Egypt, it was believed that Jordan is next in queue to surrender its sovereignty to Iran. Consequently, Israel sprung into action and deployed its diplomatic manoeuvring to keep Iran at bay from commandeering Jordan into its clutches. And to Iran’s dismay, Israeli diplomacy has yet again scored a terrific victory by snatching Jordan away from Iranian influence altogether.

Days after clinching a business deal with the Iranian backed Iraq, Jordan’s King Abdullah II on Sunday expressed his concerns over the Iranian activities in the region. Not just that, King Abdullah also shared his concerns on Tehran’s nuclear programs and the unabated development of the regime’s ballistic missile technology. King Abdullah in an interview with CNN’s Fareed Zakaria said, “(Attacks on) Israel from Syria and Lebanon to an extent, and what misses Israel, sometimes lands in Jordan.”

King Abdullah further said, “And add to that increased cyberattacks on many of our countries, the fire fights on our borders have increased almost to the times when we were at the high end with Daesh and unfortunately, Jordan has been attacked by drones that have come out, that are Iranian signature that we have had to deal with in the past year or so and escalated.”

King Abdullah is currently on a two-week visit to the United States and he’s looking to amending his country’s ties with the US previously blighted under the Donald Trump administration. When Trump made an attempt to bring Israel and the Arab countries closer, Jordan’s King Abdullah II started weaponising Islamic sentiments about Jerusalem. With President Joe Biden sitting at the helm of the affairs, the American and Jordanian relations are on the course of resuscitation. This simply means that the American administration can help Israel in taming down the Jordanian radical viewpoint of Israel.

Israel is well known to lavish significant economic gains to the countries in order to win geopolitical favours from them, and it deployed the same tactic with Jordan as well. Recently, Israel’s Prime Minister Naftali Bennett and King Abdullah secretly met in Amman, where Israel struck a deal to sell Jordan an additional 50 million cu.m. of water this year, and allow Jordanian imports to the West Bank to go up from $160 million last year to about $700m. This was followed by a public meeting between Israel’s foreign minister Yair Lapid and his Jordanian counterpart Ayman Safadi.

Read More: Jordan was all set to become an Iranian client state, and then Israel jumped with some shrewd diplomacy

Not just that, earlier this month, Jordan’s King Abdullah and Israel’s newly sworn President Isaac Herzog spoke over the phone, where the two leaders agreed to strengthen ties in the areas of economics and tourism. Jordan’s King Abdullah told President Isaac Herzog that he is satisfied by the new Israeli government’s efforts to rebuild relations between the two countries while expressing satisfaction over the return of the diplomatic relations between the countries to their proper trajectory recently.

Meanwhile, Israeli President “emphasized the importance of the strategic relations between the countries to promote peace and regional development.”

There is no doubt that Jordan is experiencing great financial difficulties as a result of COVID, corruption, mismanagement, a lack of natural resources, and particularly water scarcity. Amelioration of the ties between Jordan and Israel can help the former overcome its financial woes. Duly, Jordan is now not only openly calling out Iranian subversive activities in the region, but also embarking upon to kick start a thriving economic partnership with the Jewish state of Israel.