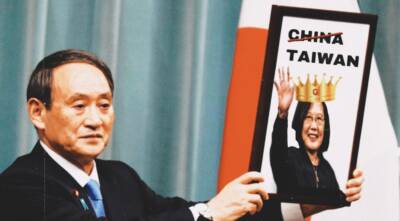 Pandemic has seen a transition in the world order, and the status quo is something that is no longer sacrosanct. The latest and what many may call the biggest transition seems to be the way in which Japan has been challenging the One China policy of Beijing. An NHK anchor introduced Taiwan’s team as “Taiwan” instead of the obligatory “Chinese Taipei” at the opening ceremony of the Tokyo 2020 Olympics on Friday (July 23). Furthermore, as the country began to win medals at the games, Taiwanese netizens noted that NHK’s medal table on its website listed the team as “Taiwan” (台湾) in Japanese Kanji. NHK, also called the Japan Broadcasting Corporation, is Japan’s public broadcaster.

Anyone who knows how the world works and what has been the norm till now will very well understands the significance of this transition. China has for the longest time tried to browbeat countries into compliance with the one-China policy and the action by the Japanese public broadcaster has angered the paper dragon. China is accusing Taiwan of “playing little tricks” after Japanese broadcaster NHK made a couple of notable references to Taiwan during the Olympic games.

During a press conference on Monday (July 26), Beijing’s Taiwan Affairs Office (TAO) spokesperson Zhu Fenglian reiterated the communist country’s claim that “Taiwan is part of China.” She stated that this principle should not be challenged and alleged that “There is no way out by playing little tricks to seek ‘independence’ through sporting events. You can only reap the consequences.”

These comments come as sheer desperation from China, given it can see that Japan is single-handedly changing the status-quo that China spent so many years building. With the release of the latest annual defence white paper of Japan, Taiwan has for the first time not been portrayed it as a part of the Peoples Republic of China.

Instead, Taiwan has been included in Part I, Chapter 2, Section 3 of “Relations between the United States and China, etc.” Although the focus is on the current situation of deepening U.S.-China antagonism, the introduction to Taiwan’s military situation has also been incorporated into this section. In this year’s white paper, Taiwan is completely greyed out from the map of China and its combat theatre commands. In previous defence white papers, Japan had displayed the island as a part of China.

The statement coming out of Tokyo is loud, clear and resounding. Taiwan is not a part of China – plain and simple. It is a free, sovereign and democratic country to which China cannot lay claim upon. Japan in the past few months has come in open support of the freedom and sovereign existence of Taiwan.

As has been recently reported, Japanese authorities which have become increasingly worried about China’s determination to invade and forcibly “reunify” Taiwan, asked American officials to share US plans for defending Taiwan. According to the Financial Times, “Japanese leaders apparently have resigned themselves to war in the event China invades Taiwan.”

The effective departure of Japan from the One China Policy comes after the country’s State Minister of Defense, Yasuhide Nakayama questioned whether many countries’ decisions, including that of Japan’s and the United States’, to pursue a “one-China” policy would stand the test of time.

While many can attribute the confident shift in Japanese regional posturing to the way in which China is trying to bully regional powers, one cannot deny the fact that Japan is also angry at China for the mess it has put the world into by means of non-cooperation and the eventual spread of Wuhan virus. The anger amplifies because this is the very reason why the Tokyo Olympics have turned out to be a flop show, instead of a show of Japan’s soft power prowess.

Read more: Japan’s Olympics has made the China-Japan rivalry a personal one

Earlier, the Olympics were considered by Shinzo Abe as the best way to end his tenure as Prime Minister and show the world that a new Japan is on the rise. However, with the world engulfed with the waves and waves of variations of the Wuhan virus, these dreams remained dreams, and the current Olympics have turned out to be an utter flop show. With all these incidents, the belligerent and aggressive foreign policy of China only added fuel to fire and made Japan realise that Xi Jinping and CCP require some schooling.

The latest actions by NHK to call Taiwan by its name instead of Chinese Taipei are one of the most significant developments in this realm of affairs.

Hoax of pop hold it down lady’s death