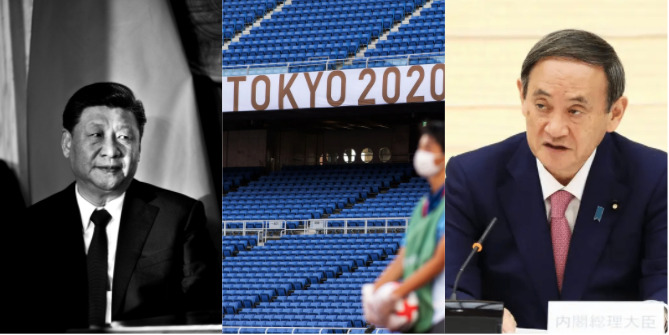 The Tokyo Olympics 2020, which are being held in the Japanese capital of Tokyo are a flop show. No spectators, rising Covid-19 cases in the city and in the Olympic air bubble widespread public opposition to the games in Japan, the prospect of the entire event generating no revenue for Japan and many other issues are making the games a dud this time. The Olympics this year are a disaster. Japan really was caught between a rock and a hard pace. Cancelling the historic games would mean that its investments of close to $15.4 billion would go down the drain. These are said to be the most expensive Olympics in history, and the year-long delay has only added to the budget.

Another postponement would have led to cost escalation all over again. Meanwhile, cancelling the games altogether would have been a blot in Japan’s history which would not be easy to remove. The Tokyo Olympics 2020, whose bid Japan won under former Prime Minister Shinzo Abe in 2013 were meant to project Japanese soft power across the world. They were meant to reap benefits of no less than $300 billion for the Japanese economy. The games were supposed to be Japan’s moment of glory. They could very well become its cause for shame now.

A survey revealed an 80% thumbs down for the games among a Japanese populace frustrated at the government’s sluggish response to the pandemic. In an unrelated contrast, only 20 per cent of Japan’s 126 million population has been vaccinated, resulting in a fourth state of emergency in the capital. Japan was betting on the fact that the Tokyo Olympics, last held in 1964, would once again help the island nation arrive on the global. The 1964 Tokyo Olympics were a roaring success. The one being held now is an utter failure.

China and Japan have not shared a personal rivalry for quite some time now. Perhaps the last personal rivalry which Japan and China shared was during World War II, and the Chinese were at the receiving end of Japanese atrocities. Now too, if we speak of the Senkaku Islands, the animosity is not very personal per se. Countries have overlapping territorial claims all the time. That China has them with every neighbouring country is a separate matter altogether. However, the Tokyo Olympics, which have proven to be a flop show, promise to reignite a rivalry between China and Japan not seen ever before.

Read more: For the first time, a moment of silence for Israeli athletes was observed in Olympics ceremony, thanks to Japan. Not a good sign for China

China is seen as the culprit of the Covid-19 pandemic. The general public perception is that China lies at the centre of the devastation being caused to mankind. For Japan, the Tokyo Olympics were a symbol of hope, pride, success, global applause and a tremendous projection of soft power. Today, the games are providing none of it. They have become a headache for Japan, and the fault lies squarely with China.

The Tokyo Olympics poses the threat of turning into a super spreader event with a cocktail of coronavirus variants. Japan is livid. The Japanese people are livid at the government and at China. The Japanese establishment is seething with fury against China, and the opposition, of course, is making it a point to score brownie points out of the crisis in which the Yoshihide Suga government is currently embroiled.

The Tokyo Olympics was supposed to be held last year. Former Prime Minister Shinzo Abe was forced to postpone them due to the Covid-19 situation prevailing last year across the country. If one tries to observe with a keen eye, it would be seen that Japan has stepped up its aggressive activism against China in the past one year itself. Japan was not always so openly anti-China. Today, it is among the most pronounced China hawks that there is.

Whether it be asserting Tokyo’s sovereignty over the Senkaku Islands, calling for a rules-based order across the Indo Pacific and maintaining an anti-China position in the South China Sea, Japan’s activism against Beijing have been galvanised in the past one year. Today, Japan is no longer seen as a pacifist state. Japan has dumped the ‘One China’ policy and is openly announcing that a Chinese invasion of Taiwan will be met with a jaw breaking military response by itself and the United States.

QUAD – comprising of India, U.S., Japan and Australia, became a reality in the past one year. Japan seeking to establish close ties with Russia with the aim of countering Beijing is a rather new foreign policy pivot of Tokyo. And this was all initiated by just the ‘postponement’ of the Olympics last year. Today, when the games have proven to be a massive headache for Japan and a point of global shame, Japan’s ire against China knows no bounds.

Now, what Japan has with China is a personal fight. It is a raw sense of disgust which the mere mention of China triggers among the Japanese. China is about to get a taste of perhaps the most aggressive Japan has been since the Second World War And if history has taught us anything, a Japan this angry has always spelled doom for China.