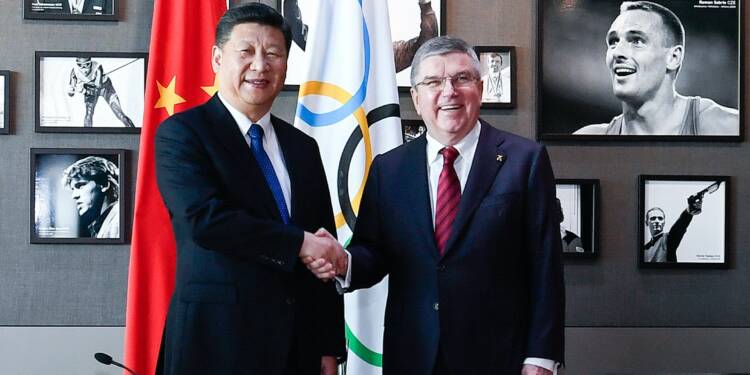 To mend its shattered image caused by the ‘intentional’ negligence in the spread of Wuhanvirus, Beijing is actively seeking a way to save some face. China is trying to imitate the massively successful ‘Vaccine Maitri’ initiative of India, but its efforts have been facing a lot of flak internationally.

China is promoting its locally developed vaccines called Sinovac and Sinopharm, but the efficiency of these two in curbing the Wuhanvirus has been debatable. International trials of Chinese vaccines have shown that they have lower levels of efficacy than the vaccines produced in India and anywhere else.

But despite the flawed and suspicious nature of China-made Wuhanvirus vaccines, the President of the International Olympic Committee, Thomas Bach made a deal with China to provide vaccines for the participants in the now postponed Tokyo Olympic games and the next year’s Beijing Olympic Games.

This surprising and baffling announcement has come on Thursday as China is facing international pressure for its inhuman treatment of Uighur Muslims and other Turkic minorities in the occupied area of East Turkestan. China’s actions have been labelled as genocide by several governments and human rights organisations of the world.

The United States on Friday harshly condemned China’s inhuman treatment of ethnic and religious minorities in the PLA occupied regions of East Turkestan and Tibet in the United Nations Human Rights Council. China and its junior partners like Pakistan have repeatedly denied the verified reports of Chinese brutalities in East Turkestan. China has repeatedly referred to these concentration camps as ‘vocational training camps’, working to stamp out Islamic extremism and separatist feelings.

The Olympics administration showed its sheepish, tail-wagging obedience towards China by calling the reports of massive human rights violations committed by China a mere ‘internal matter’. President Bach told, “We are not a super world government where the IOC could solve or even address issues for which not a UN Security Council, no G7, no G20 has a solution.” The acceptance of the Vaccine offer, which obviously would have come with a handsome bribe from China, shows the level to which the Olympic council has fallen. But there are very few takers of the Chinese vaccines.

The host Japan has outrightly rejected the Chinese offer for the vaccines for athletes. Japan’s Olympic Minister Tamayo Marukawa stated on Friday that Japan was not consulted by the IOC about the Chinese vaccines and Japanese athletes would not take them since they haven’t been approved.

Thomas Bach dusted off the concerns of many countries regarding China by saying that “This is in the remit of politics. We have to live up to our responsibilities in our areas of responsibility.” He might have forgotten that sporting events, like the Olympics, have always been a stage for expressing political issues and the issue of exploitation of the Uighur populace isn’t only political, it is about the gradual destruction of a culture, a language, an ethnic community and humanity.

In the Mexico City Olympics of 1968, two African-American athletes, Tommie Smith and John Carlos raised the black-gloved fist during the playing of the US national anthem after winning the gold and bronze medals respectively in the 200-meter running event. This demonstration became the most discussed political statement regarding the state of not just the African origin people, but the people of colour in the world. This incidence and many others have been evidence of the presence of politics in global sports events.

There are even speculations that unlike India’s Wuhanvirus vaccine diplomacy, China’s vaccine diplomacy comes with a danger. China’s supply of vaccines can be viewed as an extension of Beijing’s notorious ‘debt-trap diplomacy.’ China’s Sinovac had disappointing results in Brazil and thus Brazil signed a deal for 20 million doses of India’s Bharat Biotech’s Wuhanvirus vaccine. The two Chinese vaccines are reported to be achieving effectiveness rates as low as 50 per cent. There have been reports of expired or tainted vaccines used for routine immunisation in China and that has eroded local public trust in the Chinese vaccine industry.

Read More- Turning tragedy into opportunity: India is now the uncrowned king of the vaccine sector and has left China miles behind

On the other hand, India’s huge capacity to make Wuhanvirus vaccines is taking on China. India sent millions of doses to neighbouring Nepal, Bangladesh and Sri Lanka which allowed them to begin vaccination much before if they had waited for the Chinese doses. India shipped nearly 6.8 million vaccines for free around the world and more than 33 million shots have been exported. China had pledged around 3.9 million, but most of it still hasn’t arrived at its destinations. Even in Myanmar, which is suffering from a possibly China sponsored military coup, India has delivered 1.7 million shots while china has yet to deliver even 1 out of the 300,000 promised.

Therefore it is clearly evident what the International Olympic Council has been up to. From handing over winter Olympics hosting rights to the vaccine deal, the IOC is deep inside China’s pocket.