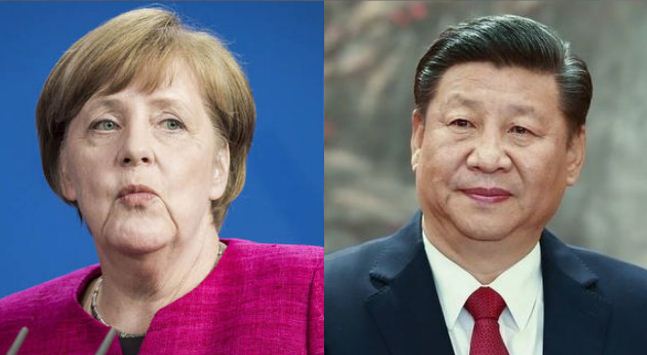 Did you know that German blue-chip companies earn about 15% of their revenue from China? The Chinese contribution to the revenue of some companies is even more, for example, Volkswagen and BMW earn 42% and 33% of their revenue from China, respectively. Though this does give China leverage in the relationship, it would be wrong to assume that Germany does not hold any weight in the bilateral ties.

Germany is the sixth-largest destination for Chinese Exports. China Germany Ties sets the tone for the EU’s dialogue with the world, and with the rift going on between the US and China, perhaps Germany has more sway than it has ever had.

Though economically China is a money-spinner for Germany, it is no less than a white elephant politically. According to a pew survey last year, 71% of Germans have an “unfavourable” view of China. China is becoming a campaign issue, and the incumbent administration is realising this and has already started acting on it.

German Chancellor Angela Merkel and Chinese Premier Li Keqiang met virtually in the sixth round of the China-Germany intergovernmental ties consultations. “As long as both sides can respect each other’s core interests and major concerns, communicate on an equal footing without interference in each other’s domestic affairs, dispel misgivings, narrow differences and concentrate on cooperation, favourable conditions for further dialogue and cooperation will be created. ”This is how I chose to put forward the ‘Stipulations’ for cooperation.”

Another way to put it is that Germany will have to not speak about human rights abuses in Hong Kong and Xinjiang, accept Huawei and not condemn China’s aggression in its neighbourhood.

Merkel expressed her wish for greater human rights dialogue, including on Hong Kong and it reflected in the German Federal Foreign Office’s summary of the report. It said: “there are a number of conflicts – especially in China’s neighbourhood – that can only be resolved by means of close and constructive dialogue with China.

”German Foreign Minister Heiko Maas said, “In the EU, we frequently say that we view China in several ways at once: as a partner, a competitor and a systemic rival. We need to keep all three dimensions equally in mind. And for all three dimensions, we need strong, viable lines of communication with Beijing.”The scepticism in the minds of the Government and the people of Germany is being reflected in these statements.

As has been clearly expressed in the Blueprint released last year for relations with China, Germany is now looking to diversify its strategic ties and trade partnerships to reduce its dependence on China.

Towards the end of 2020 the German Defence Minister, Annegret Kramp Karrenbauer announced that Germany would deploy a frigate to patrol the ‘Indo-Pacific.

Germany has joined the likes of the US, UK and Japan in using the term ‘Indo-Pacific’, which is known to irk the Chinese. Frau Karrenbauer said Germany is working to expand relations with like-minded states such as Australia.

She said, “I am convinced territorial disputes, violations of international law and China’s ambitions for global supremacy can only be approached multilaterally.” The defence minister did recognize that the importance of China as a trading partner in her statement, she also said that unequal investment opportunities, aggressive appropriation of intellectual property, state-subsidized distortion of competition and attempts to exert influence through loans and investment by China are not being ignored.

She also went on to say that even though Germany is open to investment, technology, ties that is not “Blameless” cannot be used and that the Europeans could only operate the technology that they trust. This is being interpreted as a hint that Germany would not allow Huawei to run 5G trials.

The US, the UK and Sweden have already banned Huawei, Australia banned Huawei in 2018 and now Germany has announced to send Naval Officers to Australia for defence cooperation, it looks like a clear message to China.

A new Corporate due Diligence Law, which is yet to come into force was passed by the German Parliament in May. It requires German Companies to end their business activities in Xinjiang or face fines. The law was passed targeting China over its targeted atrocities over the Muslim Uyghur minority.

Almost half of European Exports to China originate from Germany, and the German economy is more dependent on China than other major EU economies such as Italy, France and Spain. Despite this Germany is starting to take a tough stance on China ties and other European powers are likely to follow its lead. As Angela Merkel’s 16 years long tenure as Chancellor is coming to an end, China-Germany relations stare at an uncertain future.