From LGBT rights to Nord Stream 2: Biden and Merkel are leading a colour revolution against ‘nationalist’ Poland 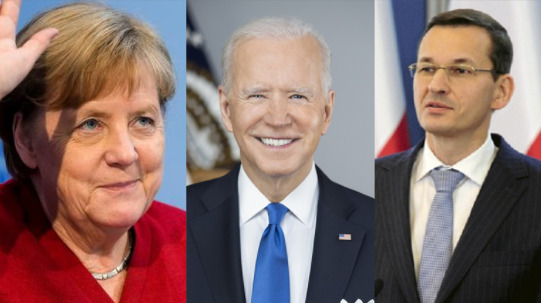 While Joe Biden is leaving no opportunity to further the cause of the deep state in the USA, on the other side of the pond, the German Chancellor has also made efforts to hide her agenda of maximising German interests at the expense of the European Union and especially the Eastern European members. Currently, Poland seems to be facing the wrath of these self-centred wannabe world leaders, because of the country’s sovereign stand over the LGBTQ rights, or the security concerns it has for the Nord Stream 2 project. The count/ry is facing immense pressure and stands vulnerable as Biden and Merkel are leading a colour revolution against a proud ‘nationalist’ Poland.

For anyone who follows the world political developments, the left-liberal political spectrum is famous for hiding their interests and greed with virtue signalling and the burden to spread western liberal order the world over. These are also the exact tools when complemented with other variables, they are helpful for achieving favourable outcomes within other sovereign states while keeping up the facade of virtue signalling. These complimenting variables and the exercise of bringing everything together can be termed as colour revolution.

Poland has historically been the European Frontier with the Russian Empire, and in the 21st century, it has been the EU’s frontier with the Russian Federation. Being in the position it is, and having a history of confrontation with Russia, both are sworn enemies. In addition to this, the President of the popularly elected government of Poland also holds a personal enmity with Russia.

In such a condition, Poland is feeling betrayed by Germany’s Nord Stream 2 deal with Russia. Both Biden and Merkel have realised that they cannot stop the criticism coming from Poland and have thus decided to topple the popular right-wing government by using issues like LGBT rights. And this is exactly how the colour revolution can be defined.

One of the most recent models of state destabilisation is the colour revolution. When accused of illegally interfering in a sovereign state’s domestic affairs, they can claim plausible deniability, and their huge mobilisation of “people power” makes them immensely effective in the eyes of the global media. Furthermore, the high number of people protesting the government adds to the pressure on the administration and limits its choices for dealing effectively with the continuous destabilisation.

The Colour Revolution is formed through a complex interaction of many factors, however, they can be subdivided into several primary infrastructural categories: Ideology, Finance, Social, Training, Information, Media. These factors interact with one another in a specific way and the interplay of the above factors creates a Movement (m). This then combines with two other variables ‘The Event’ (e), Physical Infrastructure (p), in order to produce a Color Revolution.

Both the leadership of the European Union and the USA have started to exert pressure on the Polish government and create a countervailing current in the country and force it into silence. Earlier this month, the European Commission launched legal action against the conservative governments of EU members Hungary and Poland in response to measures seen as discriminating against LGBTQ citizens.

In addition to this, Washington warned Warsaw if Poland refuses to renew the licence of a US-owned broadcaster, further American investment could be jeopardised. Speaking to TVN24 on Thursday, U.S. State Department Counselor Derek Chollet said: “This is a very significant American investment here in Poland. And there will be knock-on effects perhaps, if the [TVN24] license is not renewed, to future U.S. investments.”

An agreement between Germany and the United States has been reached, paving the way for the controversial Nord Stream 2 gas pipeline between Russia and western Europe to be completed. The agreement agreed by Merkel and Biden may have appeased Washington’s critics, but it has failed to assuage eastern European concerns over the project’s security consequences. Nord Stream 2 promises Germany, the EU’s economic powerhouse, massive commercial benefits, and Commission officials have claimed that they do not have the authority to reject the project.

But in central and eastern Europe the pipeline is seen as a direct threat to regional security. A joint statement by Ukraine and Poland in response to the US-German deal said, ‘this decision has created political, military and energy threats for Ukraine and Central Europe, while increasing Russia’s potential to destabilise the security situation in Europe, perpetuating divisions among Nato and European Union member states.’

However, as we know that the left-liberal politicians are used to wearing the guile of morality and pursuing profit-based deals with no concern of other allies and partner countries. While the USA and Germany under the leadership of Biden and Merkel would have wanted to see Poland stay mum on this development, the current popular right-wing leadership has no interest in selling off its country for the sake of these large powers. Now as they cannot keep him quiet, Biden and Merkel are decisively leading a colour revolution against ‘nationalist’ Poland by using LGBTQ rights and freedom of speech issues as tools for the same.

With Egypt on its side, Russia aims to kick China out of Suez Canal