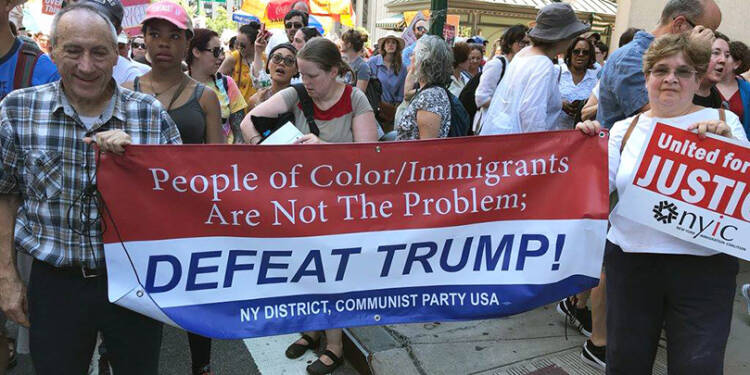 Anti-Communist language remains on the books in several states of America. However, an entire state in the United States, the state of Connecticut has been slowly and steadily usurped by Chinese Communists at the behest of the ruling Democrats. Connecticut is a glaring example of how communism’s tentacles have made their way deep into the USA’s democratic machinery while the state’s Democrats have been simply taken for a ride by the communists.

Ned Lamont, the current governor of the state, is a big-time fan of communists. Of all, the closest to him is his great uncle Corliss Lamont, an avowed Stalinist. According to the Waterbury Republican-American, Corliss has for long sought to impose socialism and atheism on the American people. In July 2006, the Communist Party USA brazenly supported Corliss Lamont in the senate elections, noting that he “can make a positive contribution toward changing control and direction of Congress.”

The other big cheese from the state of Connecticut is Chris Murphy, serving as the junior United States senator from Connecticut since 2013. Murphy’s key staffer Maxwell Goldman is a card-carrying member of the Communist Party United States of America (CPUSA). The fact that Murphy served on the Senate Foreign Relations Committee makes this story even more disturbing.

Goldman briefly left to serve as field director for Friends of Elizabeth Esty until November 2016. Esty served Connecticut’s 5th District in Congress until 2018 when she left under a cloud of scandal regarding sexual harassment by an office staffer under her.

Goldman has a degree in philosophy from Tufts University and was a leader of the Jumbo Janitor Alliance, a far-left group that had close ties to several Massachusetts state politicians. After college, Goldman was actively involved with the Connecticut SEIU, a labor Union that is heavily influenced by the CPUSA.

While working for Murphy, Goldman even served as a Connecticut delegate to the Communist Party USA National Convention in Chicago, back in 2014. It was the same period when Murphy would serve on the Senate Foreign Relations Committee.

For the unaware, CPUSA has close ties to Communist parties in countries such as Russia, China, Cuba, Vietnam, Iraq, and Iran. Make no mistake, all these countries are not exactly on the list of those friendly to the United States.

A woman named Joelle Fishman also worked alongside Goldman during those days. Interestingly, the woman is the current chairman of the Connecticut Communist Party USA. She is a commissioner on the City of New Haven Peace commission and serves on the executive board of the Alliance of Retired Americans, another group with close ties to the Communist party.

Fishman has been closely tied to a number of Connecticut’s ruling elite, including both US Senators, as well as members of Congress and the governor’s office. She has also been linked closely with the Connecticut AFL-CIO.

The same is the story for Jim Himes, serving as the U.S. Representative for Connecticut’s 4th congressional district since 2009. Ostensibly, he is a mainstreamed, non-radical member of Congress.

Himes, by the way, is also a longtime friend of the Connecticut Alliance for Retired Americans, including Communist Party supporters Kevin Lynch and Call Bunnell. He also chairs the National Security, International Development and Monetary Policy Subcommittee of the House Financial Services Committee.

On similar lines, Connecticut’s 1st District Congressman, John B. Larson is also a devoted follower of Communism who once met with Cuba’s foreign minister, Bruno Rodriguez Parrilla back in May 2015.

Of all, 3rd District Congresswoman Rosa DeLauro, who also holds the capacity of Chair of the House Appropriations Committee, is most closely tied to the Communist Party.

Moreover, the entire Congressional delegation in the state, including its newest member Johanna Hayes, is tied to the Communist Party of Connecticut. Above of all, all of these officials have been brazenly by the Working Families Party, an offshoot of the Communist Party USA.

The rise of communism in the state is a worrying phenomenon, not only for the residents of Connecticut, but for all of the concerned citizens. Connecticut could just be a beginning. The same could be replicated in the other states if the menace is not handled with the utmost priority.

Communists around the world are abusing the openness and the democratic values of American society. For instance, last several gubernatorial elections in Connecticut have been extremely odd, with last-minute hijinks playing into the past two elections, where Democrats were somehow able to pull victory out of the jaws of defeat.

Democracy is under grave threat in the USA. Communists are taking over the nation and it is high time that their brazenness must be put to the rest by the concerned citizens of the USA.