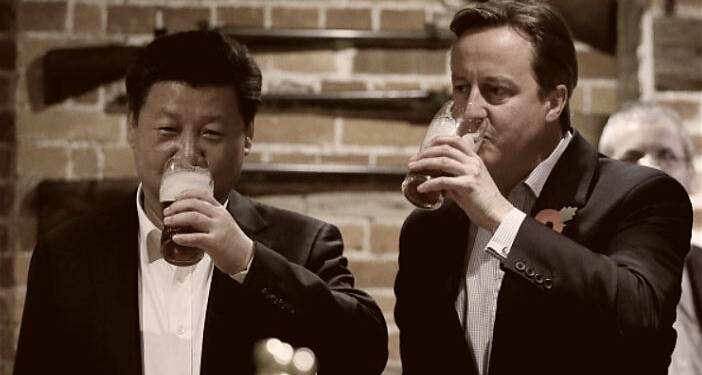 China has been facing severe setbacks internationally – and the global awareness against the evil Communist empire has only grown in the past one and a half years, with the Coronavirus pandemic ravaging the world and killing millions. Countries around the world have been resetting their ties with Beijing, mostly to China’s disadvantage. Among them has been the United Kingdom, which has completely given up on any pretence of trying to salvage bilateral ties with China. Gone are the days of former British Prime Minister David Cameron, when China was extolled by the UK only to lure Beijing to invest in the country which was back then preparing to leave the European Union.

The Boris Johnson-led UK government is now considering ways to block China’s involvement in future UK nuclear power projects. The move could affect the development of the Sizewell C project in Suffolk, in which state-backed China General Nuclear is set to play a key role. The move to block China from nuclear-powered projects could also spell doom for the Bradwell B project in Essex, where China is the lead developer.

China’s involvement in nuclear power in the UK dates back to an agreement struck by then prime minister David Cameron and Chinese president Xi Jinping in 2015.

David Cameron’s six years in office, between 2010 and 2016 really caused extensive damage to the UK. The man, as Prime Minister, practically set out on a mission to sell the UK to China under the false promise of a “golden era”. The era was indeed golden. However, for China, and its proxies in Britain alone. For China, it is now hard to believe that less than five years ago, Xi Jinping was sharing a beer pint with the UK’s former Prime Minister David Cameron at a pub in the English county of Buckinghamshire. It is a different matter that China bought the same pub a year later. Ever since, the UK has slipped out of China’s hands dramatically – and thank God it has.

Since 2013, David Cameron went out of his way to forge warm ties with China. David Cameron’s 2013 visit to China had bolstered UK-China ties. On his three-day visit to China, Cameron meant business. The largest British trade delegation ever consisting of more than 120 people had accompanied the former UK Prime Minister and agreements worth 6 billion pounds were signed between the two countries.

The UK was still a part of the European Union in the Cameron era, and Xi Jinping saw this as an opportunity to wean the intergovernmental organisation away from Washington. Bilateral visits had become frequent. In 2014, Chinese premier Li Keqiang visited the UK. A year later, George Osborne, then the Finance Minister of Britain declared in Shanghai, “We need China to power our economy forward.”

The Sino-British partnership, however, reached its zenith with Jinping’s 2015 visit to the UK. It was during this visit that the two leaders ended up at a pub. Cameron had promised a “golden era” in bilateral ties ahead of the Chinese President’s visit. Xi Jinping himself lauded the UK for its ‘visionary’ openness and China exhorted others to go down the same path.

It is widely believed that China had an exclusive lobby pushing its interests in London. This lobby included David Cameron himself, and some of his top aides. All of these aides, incidentally, happen to have been or continue to be connected with Huawei and are seen pushing Beijing’s interests in Britain. Lord Browne, who last year announced that he will step down early as the UK chairman of Huawei Technologies, served as the British government’s Lead Non-Executive Director from 2010 until 2014. Sir Andrew Cahn, a board member of Huawei UK, was in charge of UK Trade and Investment, while John Suffolk, Huawei’s Senior Vice President and Global Cyber Security and Privacy Officer, also served as Cameron’s Chief Information Officer.

In 2017, a UK fund supporting China’s One Belt One Road (OBOR) project was announced, and David Cameron was made its vice-chairman. According to Forbes, it was a private equity fund supporting UK-China relations, and aimed to boost ties between the two nations. This was one among the many desperate attempts made by Cameron during the prime ministership of Theresa May to scale up ties with China.

As early as last year, former UK prime minister David Cameron was pushing ahead with a troubled scheme to raise a $1 billion China investment fund. Named the UK-China Fund, the private sector initiative is intended to seek partnership opportunities between the two countries in technology, healthcare, energy and manufacturing. Out of office most certainly, Cameron is definitely not out of bed with China and is still pushing for Beijing’s interests to be accomplished in the country.

The coming of Theresa May, and then Boris Johnson as Prime Ministers has averted a major disaster for Great Britain, which David Cameron was driving his country right into. Now, the UK is rectifying the criminal mistakes of Cameron and decoupling from the evil empire of China. But for Great Britain to never be haunted by China again, people like David Cameron must never be allowed entry into the country’s highest offices, because if they do get a chance, they will sell their countries all over again, much like how they have sold their souls to Xi Jinping.