China used a Swiss scientist to discredit calls for Covid investigation. Only problem was, the scientist does not exist 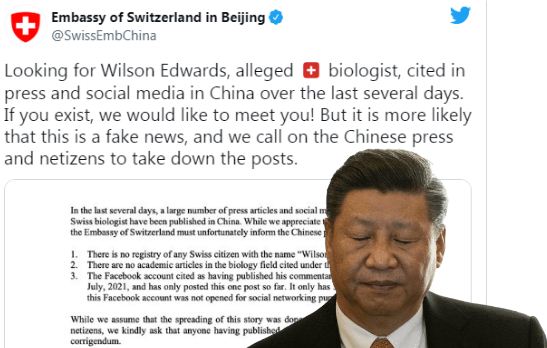 ‘Where did the Covid-19 originate?’– The question is more than enough to make the Chinese dragon lose its temper. Last year, when Australia demanded a thorough investigation into the Covid-19 origins, the Chinese government reciprocated with the hard economic measures, including higher import duties and stringent quality checks for the Australian goods. China resorted to intimidate the world with its bellicose Chinese officials and threatened nations with severe economic sanctions if they dared to rake up the issue of Covid-19 origin.

Like this was not enough, it has now been revealed that China even resorted to publish and propagate the views of a fake and fictitious Swiss scientist to further its agenda to quell the calls for open and independent investigations into the Coronavirus origins. ‘Wilson Edwards’ was the name that Chinese media accorded the fictitious scientist with. Even a Facebook page was created and attributed to the scientist that was particularly used to publish the content that favored the Chinese version of the Covid story.

Read More: ‘The answer to every question on China is India,’ Australia partners with India to take on China

Edward’s pro-China comments would be eagerly published by the Chinese media to counter the popular narrative against Chinese interests. Edwards once wrote on his Facebook post that the US President Joe Biden’s administration was trying to reclaim its influence in the WHO, after his predecessor Donald Trump withdrew the US membership from the international body in April 2020 as the pandemic began. “I have the impression that the WHO’s new plans, which include lab audits, are largely politically motivated,” Edwards was quoted as writing on the social media platform.

However, the beans were spilled on Tuesday when the Swiss embassy in Beijing raised the question over the “existence” of any such scientist who was periodically quoted by the Chinese media. Recently, the Chinese state affiliated media CGTN had published a report that claimed that Wilson and his colleagues were under immense pressure from the US and various media outlets for supporting the conclusions that gave China a clean chit over the accusations of mishandling of the pandemic by the Chinese authorities. After the report was out, the Swiss government lost no time in unearthing the truth and expressed its desire to meet the scientist in person.

The Swiss Embassy in Beijing highlighted its suspicions about the quoted scientist on Tuesday with a Twitter post: “Looking for Wilson Edwards, alleged [Swiss] biologist, cited in press and social media in China over the last several days.” “If you exist, we would like to meet you!” the embassy tweeted.

Looking for Wilson Edwards, alleged 🇨🇭 biologist, cited in press and social media in China over the last several days. If you exist, we would like to meet you! But it is more likely that this is a fake news, and we call on the Chinese press and netizens to take down the posts. pic.twitter.com/U6ku5EGibm

Embassy clarified that no Swiss citizen named Wilson Edwards appeared on registries or academic articles from the biology field. It also revealed that the Facebook account attributed to the fake scientist was opened on July 24 and its main objective was to publish content that could be used by the Chinese media to spew venom against the US and countries calling for an open investigation into the Chinese handling of the pandemic.

Chinese media sprung into action after the bombshell exposure, and rushed to scrub the references to the fake scientist from their previous articles and reports. However, an authenticated Facebook account of China’s People’s Daily newspaper still had an English language reference to an article from CGTN.

Read More: American leftist media dismissed Donald Trump’s lab leak claim as a joke. Now they are forced to admit that they were wrong

The ‘Wilson Edwards’ episode shows the great length the Chinese authorities are willing to go in their bid to subdue the calls for another investigation into the pandemic origins. A research has already been carried out by a group of compromised scientists under the umbrella of World Health Organisation that dismissed any lapse on the part of Chinese authorities. The study, released publicly in March, presented several hypotheses about how the pandemic started but no firm conclusions.

However, various experts around the globe looked askance upon the way the investigation was carried out by the scientists who had their interests vested in rebuffing the Wuhan lab-leak theory. Since then, demands for another independent investigation have been reinforced and China has grown more scrupulous of any effort in that direction.

The way how China created a scientist out of thin air in its bid to emboss its own theory of Covid origin on the world, speaks volumes about the fact that China is increasingly finding it strenuous to rebuff the covid lab-leak theory. Propagating the views of a fake scientist is what a desperate Chinese media has now resorted to. However, such moves by the Chinese authorities will only stimulate the global efforts towards unearthing the true facts regarding the spread of the Coronavirus.