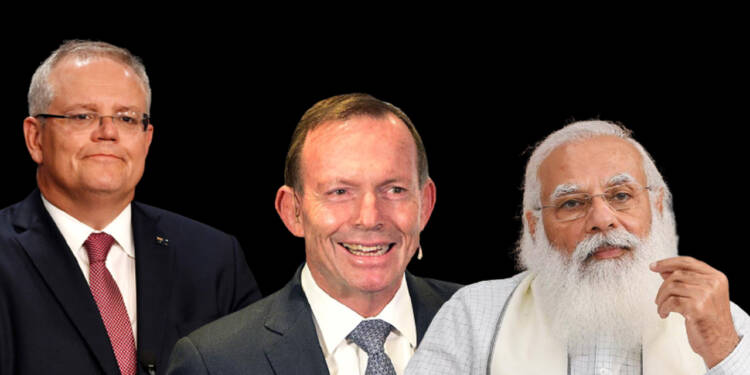 Chinese authoritarianism is asking some tough questions of the free world. Does the free world have an answer? Fortunately, it does. And the answer is India. Australia seems to understand this quite clearly. In fact, Australian special envoy and former Prime Minister Tony Abbott has made an emphatic push for a Free Trade Agreement (FTA) between his nation and India. Abbott’s proposal adds up to the Indo-Australian friendship, which has taken off spectacularly.

Abbott has made it clear that an FTA between Australia and India would signal the “democratic world’s tilt away from China.” He also said that the “answer to almost every question about China is India.” Indeed, with India handling a tense military standoff with China and Australia fighting a fierce trade war with the paper Dragon, it makes sense for both New Delhi and Canberra to join hands and tame the People’s Republic of China.

In an opinion piece published in The Australian newspaper, Abbott wrote, “With the world’s other emerging superpower becoming more belligerent almost by the day, it’s in everyone’s interests that India takes its rightful place among the nations as quickly as possible.”

The former Australian Prime Minister added, “Because trade deals are about politics as much as economics, a swift deal between India and Australia would be an important sign of the democratic world’s tilt away from China, as well as boosting the long-term prosperity of both our countries.”

It is only fitting that the Australian envoy and former Prime Minister Tony Abbott is making a strong case for India to play a central role in global affairs and tackling China. India and Australia have drafted a strong bilateral relationship in the recent past, starting with Indian Prime Minister Narendra Modi’s visit to the Australian Parliament in the year 2014. At the time, a great personal chemistry between PM Modi and the then Australian PM Tony Abbott was on display.

Tony Abbott is still helping India and Australia come closer. He visited India from August 2 to 6, as Australian Prime Minister’s Special Trade Envoy to India. Australian High Commissioner to India Barry O’Farrell said that Abbott visited India last week to “propel our economic relationship to its full potential, to the mutual benefit of the Indian and Australian people.”

Australia itself has resorted to some restrictive measures. Canberra is even expected to introduce a Magnitsky-style sanctions law with the object of targeting China. The Sino-Australian trade relationship is dying, and this is where India comes into picture. Canberra looks at India as a democratic and benevolent substitute to China.

Now, Canberra is planning to export 500,000 tonnes of malt barley to the Indian market, which will help it off set much of the losses inflicted by Chinese tariffs.

The case of Australian iron ore may not be very different. Presently, China imports most of its iron ore from Australia. But Xi Jinping is now looking to throw his country’s colossal steel sector out of business so that he can impose tariffs on Australian iron ore too. However, Australia again finds an answer in India, whose steel sector is set to take off dramatically. Even if China bans or restricts the import of iron ore, Australian miners can divert much of their trade towards India. This will be mutually beneficial for New Delhi and Canberra.

The Indo-Australian relationship is not just about trade. Both PM Modi and his Australian counterpart Morrison understand that China poses the biggest security threat to the world at large. Therefore, they are cooperating in the defence sector too. Last year, the Indian and Australian Navies participated in the Malabar Exercise along with their Quad partners- Japan and the US. India and Australia are also joining hands in the hotly contested waters of the South China Sea.

Last year, India and Australia also finalised the Mutual Logistics Support Agreement. This allows the Navies of the two countries to access each other’s ports for logistics such as food, water, and petroleum.

Australia is a key player in the Indo-Pacific, and it understands that containing the Chinese threat in this strategically significant region isn’t possible without joining hands with India. For Australia, India is indeed the answer to almost every single question concerning China from the need for supply chain diversification to defence cooperation.