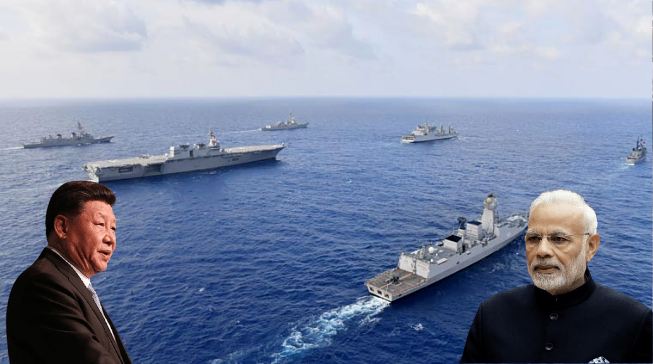 China considers almost the whole South China Sea as of its own. If any country dares to breach China’s ‘sovereign’ claims, it immediately gets chastised by Jinping’s wolf warriors. However, China’s unwarranted rants and diktats are what the democratic countries are least bothered about. India, for instance, is all set to deploy four warships in the South China Sea for the next two months, for participating in various military exercises with Quad countries and ASEAN partners.

As per media reports, the task force of four warships includes a guided-missile destroyer, guided-missile frigate, anti-submarine corvette and guided-missile corvette; that will embark upon a two-month deployment to the troubled waters. The warships will depart India early this month, the Defence Ministry statement said, without giving a specific departure date.

The task force is expected to participate in Malabar 2021 naval exercises with the US, Japanese and Australian forces. In other bilateral exercises during the deployment, the Indian warships will work with naval units from South China Sea littoral states, including Singapore, Vietnam, Indonesia and the Philippines, the Defence Ministry said.

“These maritime initiatives enhance synergy and coordination between the Indian Navy and friendly countries, based on common maritime interests and commitment towards Freedom of Navigation at sea,” the Indian statement said.

Experts suggest that this deployment is going to be India’s most glaring naval presence right in the face of Chinese naval force. “The mere presence of the ships in the South China Sea, even if outside the 12 (nautical mile) limit of each Chinese-occupied feature, would have sufficed to meet New Delhi’s strategic objectives of signaling its intention to remain engaged in the Western Pacific”, said Collin Koh, a research fellow at the S. Rajaratnam School of International Studies in Singapore specializing in naval affairs.

China has regularly accused Quad countries of stirring up tensions in the South China Sea at the behest of the United States. It is expected to echo the same decry this time around too. However, from India’s perspective, the development holds quite a significant geopolitical value. India’s naval deployment in the South China Sea comes in the backdrop of ongoing tensions in the Indo-Tibetan border region.

On Saturday, senior commanders of India and China held their 12th round of meetings. While the Indian side objected strongly to the presence of Chinese troops in three friction points- Hot Springs, Gogra and Depsang, the Chinese agreed to retreat from Hot Springs and Gogra, which are also known as PP-15 and PP-17 Alpha respectively. However, if China doesn’t withdraw from Depsang, then India can reportedly mount pressure by surrounding the PLA through the occupation of Kailash heights.

India, therefore, would also seek to exert its leverage over China by participating in the multilateral military exercise with the Quad countries and by asserting its naval presence in the vicinity of China-claimed maritime territories.

Also, India’s decision to undertake such a large-scale military operation in the hotly contested waters comes at a time of China’s unprecedented hostility against the comparatively tiny ASEAN nations.

In June this year, Malaysia accused China of violating its territorial integrity by flying 16 Chinese military aircraft over disputed waters off its eastern state of Sarawak. Malaysian fighter jets were then scrambled from the Labuan Air Base to carry out “visual identification” and later, the Malaysian government summoned the Chinese ambassador to explain the Chinese military’s hostile posture against the country.

📃 – @MalaysiaMFA 🇲🇾 will issue a diplomatic note of protest against the intrusion to the Government of the 🇨🇳 PRC; will also summon the Ambassador of the PRC to Malaysia to provide explanation regarding this breach of Malaysian airspace and sovereignty. pic.twitter.com/dgzbIZQow7

Malaysia, the Philippines, Brunei, Taiwan and Vietnam, all contest China’s claim to almost all of the South China Sea. The row has rumbled on for decades but tensions have increased in recent years. And thus, India’s entry into the SCS arena is going to irk the Chinese government in epic proportions.