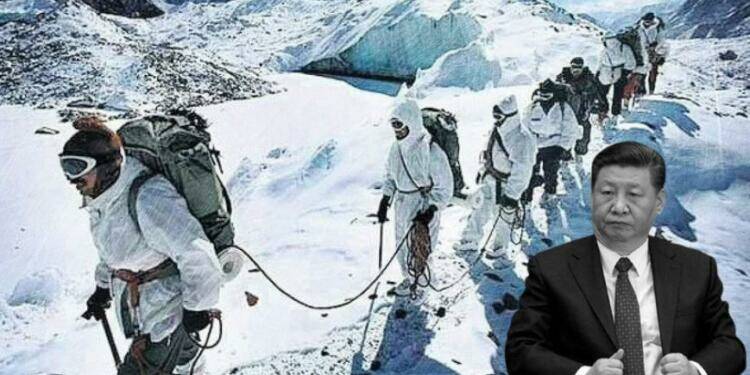 It has almost been 16 months since the Indian Army troops and Chinese People’s Liberation Army (PLA) got engaged in a standoff. The two forces have stayed locked in a tense standoff ever since. However, now China seems compelled to disengage from the remaining friction points, or else India will land a knockout punch straight into the PLA’s face.

On Saturday, senior commanders of India and China held their 12th round of meeting. While the Indian side objected strongly to the presence of Chinese troops in three friction points- Hot Springs, Gogra and Depsang, the Chinese agreed to retreat from Hot Springs and Gogra, which are also known as PP-15 and PP-17 Alpha respectively. However, if China doesn’t withdraw from Depsang, then India can reportedly mount pressure by surrounding the PLA through the occupation of Kailash heights.

As per an Indian daily, Dainik Bhaskar, China isn’t ready to withdraw from Depsang Plains. Indian Army troops are being prevented from moving beyond PP-10, PP-11, PP-11 Alpha, PP-12 and PP-13. Depsang is a critical point for India, being located merely 30 kilometres away from Daulat Beg Oldi and Karakoram Range where India’s highest airfield is located.

In fact, Depsang Plains wasn’t originally a part of the bilateral talks between the Indian Army commanders and the PLA commanders. It was India which reportedly brought Depsang Plains on the agenda in April and made it clear that if disengagement has to take place, China will have to move back even in the Depsang Plains. Now, as China is ready to move back from other friction points, India is once again insisting that the standoff won’t be treated at an end unless China withdraws from Depsang Plains.

So, India wants to vacate Depsang Plains and throw the Chinese off this territory, as a precondition for ending the ongoing standoff between the two countries. However, if China doesn’t retreat from Depsang, then India has a foolproof plan of arm-twisting China.

According to the Dainik Bhaskar report, the Indian Army is fully equipped and fully prepared to deploy its troops on the Kailash Range with the aim of rattling and surrounding the Chinese PLA. Kailash Range is a group of tactical heights located in close proximity to China’s Western Highway and once troops from the Indian Army or other security forces get deployed on these heights, China will start feeling vulnerable.

In fact, India has first-hand experience of scaling the Kailash heights and pushing China on the backfoot. Last year, India pressed its top-secret commando unit, the Special Frontier Force, also called the SFF, into service and surprised China by occupying the Kailash heights. The SFF consists majorly of Tibetan-origin soldiers and therefore, India also sent across a clear message- the tensions created by the standoff in Ladakh can easily spill over into China-occupied Tibet.

The Indian troops left Kailash heights only in February when the Indian Army and the Chinese People’s Liberation Army (PLA) disengaged in the main friction points – North and South banks of Pangong Tso. By occupying Kailash heights last year, India had managed to coerce the Chinese into withdrawing from the Pangong Tso region. So, there is no reason why India will desist from occupying the tactical heights once again- this time to throw the Chinese off the Depsang Plains.

Also, if China doesn’t give in to India’s demands, New Delhi will have no qualms in raising the Tibet issue once again. There are signs that India is rattling China by flashing the ‘Free Tibet’ card right at the CCP’s face. Recently, Prime Minister Narendra Modi wished the 14th Dalai Lama on his birthday – the first time he has done so publicly after assuming office. This rattled Xi Jinping to the extent that he was forced to visit Tibet and bordering towns with India in order to assert’s China’s hold over the occupied region.

As a matter of fact, India even arranged for U.S. Secretary of State Antony Blinken to meet a top aide of the Dalai Lama, which again caused the CCP to fume.

The Indo-China standoff in Eastern Ladakh is therefore heading towards a reasonable conclusion. And India is clearly the big winner at this stage. The paper dragon has been humiliated and if China doesn’t back off in time, India will deliver a knockout punch to kick it out of the region.