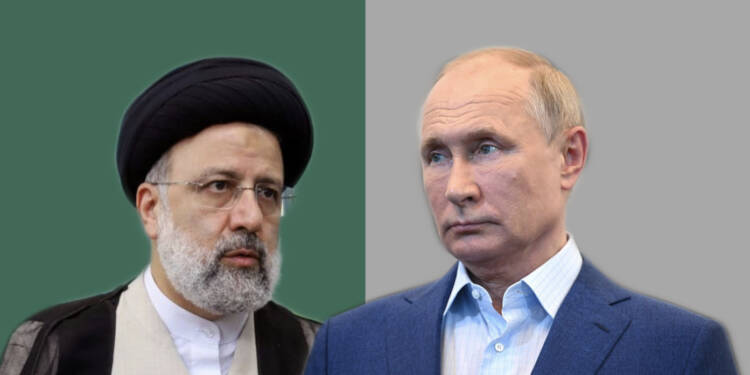 Russia hates it when any one of its partners gets too close to China. And we are seeing this again with the growing proximity between Beijing and Tehran. Russia has now subtly warned Iran against getting too close to China and becoming a Chinese Client State. The ongoing powerplay between Russia and China, of course, runs counter to the Western media’s narrative of a Russia-China-Iran axis. In fact, there isn’t one. What is there instead is great power competition between Russia and China for Iran, while Tehran tries its best to balance the two.

A photograph was recently posted on the Russian Embassy’s Twitter handle recalling the 1943 Tehran Conference, when Iran used to be under the occupation of the Allied powers. The picture has triggered a meltdown in Iran with outgoing Foreign Minister Mohammad Javad Zarif calling it “extremely inappropriate”. Iranians feel as if they are being reminded by Russia about the history of foreign occupation.

The photograph was however Russia’s veiled message to Tehran and the newly-elected Iranian President Ebrahim Raisi. Russia is warning Iran against going into China’s arms, or else Iran could face serious consequences in Syria and on the Israeli issue.

In fact, Ali Shamkhani, Secretary of Iran’s Supreme National Security Council, tweeted in Hebrew about a meeting with his Russian counterpart Nikolai Patrushev. Shamkhani’s Hebrew-language tweet came a day after Patrushev met with outgoing and incoming Israel national security advisers. This illustrates how Russia can use its close ties with Israel to harm Iran, in case the latter gets too close to Beijing and decides to desert Moscow.

What the latest moves by Russia indicates is that there is no trilateral axis between Moscow, Beijing and Tehran. In fact, Moscow and Beijing compete for influence in Iran. The ongoing powerplay between Russia and China in Tehran is a part of their larger competition for influence in the Middle East.

While Russia enjoys good relations with both the sides in the region- Iran on one side, and the Israeli-Arab alliance on the other, China and Iran have been warming up to each other significantly.

Till now, Iran used to remain equidistant to the two big powers- Russia and China. Maintaining good ties with Moscow and Beijing was a part of Iran’s strategy to sustain its anti-US rhetoric. However, Iran is slowly drifting away from Russia and getting closer to China, and this process is expected to accelerate with an ultraconservative like Ebrahim Raisi in power.

The fact remains that Iran and Russia don’t have as much in common, as Iran and China have. For starters, Russia is apprehensive of Iran’s nuclear ambitions and tacitly wants to prevent the Shi’ite nation from acquiring nuclear weapons. China, on the other hand, is not opposed to Iran’s nuclear ambitions. In the past, Beijing has even encouraged Tehran’s quest for a nuclear bomb.

Even in terms of its economic relations, Iran finds more comfort in China than in Russia. Recently, China agreed to spend a whopping $400 billion in Iran as a part of a 25-year cooperation agreement with the Shi’ite nation. In return, China will tap into Iran’s massive oil resources.

China’s economic needs align with Iran’s. China needs to purchase lots of oil to power its massive economy, and a sanctions-ravaged Tehran needs a big purchaser for making some money. Russia, on the other hand, is itself a major oil-selling nation and it cannot help Iran in terms of oil sales.

Moreover, even in terms of trade with Iran, China has overtaken Russia. The Russia-Iran trade turnover for 2020 stood at $2.22 billion. On the other hand, only the non-oil trade between Iran and China reached $18.715 billion last year.

For Russia, Iran carries a lot of importance. Russia’s trade interests in the Indian Ocean Region (IOR) pass through the Shi’ite nation. In fact, Moscow wants to build the International North-South Transport Corridor (INSTC) that would link Russia’s Moscow to India’s Mumbai with a network of ships, roads and railways. It would pass through India, Iran, Afghanistan, Azerbaijan, Central Asia, Russia and Europe.

It is geographically impossible for Russia to access the IOR without Iran’s cooperation. And since, the INSTC clearly counters Chinese influence in Eastern Europe, Central Asia and the IOR, China would use all its influence to desist Iran from cooperating in the project. This is why Russia doesn’t want Iran to become China’s Client State. In fact, Iran stands warned by Russia- do not become China’s proxy or else Moscow would be ready to cooperate with Tehran’s enemies.