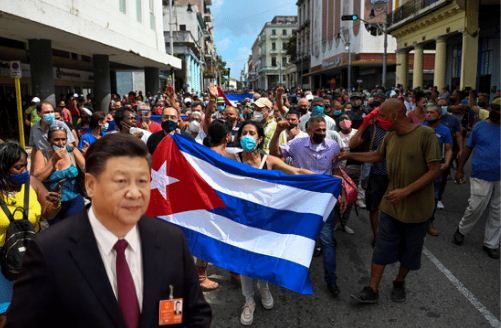 Cuba is reeling under massive anti-government protests for over a month now. The people are frustrated at the hardships being suffered by them under the communist regime for decades. Amidst plummeting economy, worsening shortages, growing queues and metastasizing pandemic, the Cuban people have a strong intuition that they could put an end to the tyrannical communist rule as the Castros are finally out of power. The protests have sent the country’s ruling communist party into a state of abyss, which is now going all guns blazing after the demonstrators and is convicting them of indulging in anti-state activities and vandalising state properties.

However, there is also a China angle to it. China is vehemently scared of the ongoing anti-communist protests in Cuba and is intimidated at the fact that a successful overthrow of the communist regime by the Cuban people could stimulate a similar uprising in China as well. Hence, when the protestors began storming the streets all over the country, the Chinese state-owned internet giants operating in the country sprung into action and rushed to censor the anti-government voices at the behest of the Cuban ruling communists.

Frustration with the dictatorships incompetence,greed & repression is mounting rapidly pic.twitter.com/eSAr8Xrxpf

Furthermore, it is now revealed that the Cuban Revolutionary Armed Forces (CRAF) was being steadfastly trained by the Chinese trainers, particularly for quelling the mass riots. Reports suggest that Cuban police may have learnt some tactics from their Chinese counterparts, especially from the People’s Armed Police (PAP) that specializes in suppressing the domestic uprisings in China. Reportedly, Chinese Communist Party has periodically used its services in China’s western Xinjiang province to quell secessionist calls by the Uighur separatists. The CCP also deployed these PAP forces in Hong Kong last year to suppress the massive pro-democracy demonstrations as per some anonymous sources.

The first documented training event traces its roots back to November 2008 when around 90 trainees from the Cuban Armed forces took part in the program. Two third of the 90 trainees belonged to the elite and powerful “Black Berets” forces of the CRAF that directly reports to the Cuban ministry of Internal affairs.

Later, it was in 2016 that the PAP had sent its six training officers to the Cuban Ministry of the Interior National Special Warfare Training School to oversee a one-month training program. The curriculum covered more than 160 skills in six categories, including tactical shooting, Chinese martial arts, tai chi, and strategies to subdue violence and suppress the mass protests.

A communist rule in Cuba strongly serves Chinese interests. China has dominated country’s recent infrastructural projects since the country decided to revamp its ageing railway system. In a friendly move in October last year, China and Cuba even signed an agreement to extend Chinese language learning among the island’s secondary school students as an optional foreign language. Cuba is often referred as China’s socialist brother by the Chinese state media.

However, China’s biggest motive behind profusely helping Cuban Communists to keep their rule intact over the country remains surprisingly underreported. The massive anti-communist protests in Havana are also a major threat to the CCP’s tyrannical rule in China. The CCP fears that such protests could embolden the disillusioned faction within the Chinese society to reinforce their protests against the regime.

Read More: As CCP finds itself in a tough spot to explain China’s flood situation, it shifts focus to international media’s anti-China bias

The Communist Party of China (CCP) is already reeling under massive anti-government sentiments prevailing in the Chinese society. The ravaging pandemic along with the devastating floods and plummeting economy has exacerbated the woes of Chinese people. The Communist party, by banning video games and the blossoming Karaoke industry, is reining in upon whatever leisure is left for the sulking people in China.

All in all, the situation is quite precarious for the Chinese Communist Party, and then an overthrow of a communist regime in Cuba could very well spell a doom for communist rule in China. Ouster of the Cuban communist regime would give the alienated Chinese an intuition that the CCP is not an invincible force.

Hence, not just for the Cuban communists, it is also essential for the Communist Party of China that calls for a change in regime are vehemently subdued. The fact that the Chinese government has been providing training support to the Cuban armed forces for over a decade, particularly to squash the massive protests and riots, implies that the Cuban government had anticipated such massive protests beforehand and was preparing for a fierce pushback in hindsight.

From providing training support to helping the communist regime in censoring anti-government voices, the CCP has brazenly and overtly helped the Cuban government stay afloat. The CCP knows that if the communist regime in Cuba is overthrown, the next could be none other than the CCP itself that sits upon a simmering volcano of anger and irate of 1.4 billion Chinese people.

Two decades of nothing. Afghanistan is America’s worst defeat ever