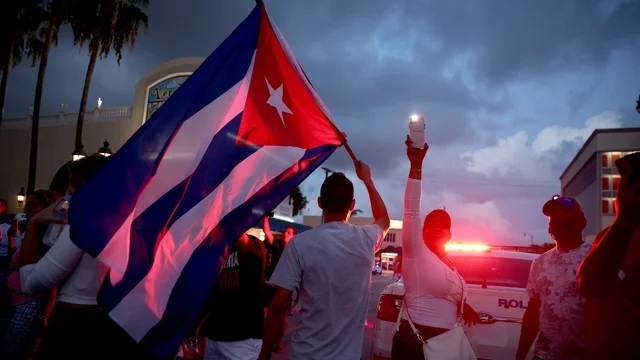 Cuban people recently got a tasteful iota of capitalism. Miguel Díaz-Canel, the newly appointed President of Cuba, announced the liberalization of various sectors of the Cuban economy. The reform included provision for legal status for Cuba’s thousands of businesses, spread across at least 2,000 sectors. The Cuban people, however, want more. Spontaneous street protests broke out in several cities of Cuba amid a worsening economic situation in the communist-ruled country. On Sunday, Demonstrations were held in cities across the country, including the capital Havana, demanding an end to Miguel Díaz-Canel-led regime.

Some analysts noted online that Sunday’s demonstrations are the first time that so many had protested the government since the Maleconazo uprising in 1994, which prompted a number of Cubans to leave the country by boat to the United States. Videos uploaded on social media appear to show demonstrators shouting, “Down with dictatorship”, “Freedom” and “Homeland and life.” Miguel Díaz-Canel, however, blamed the protests on a foreign smear campaign initiated by the United States, before issuing diktat to the security forces for dispersing the protestors.

Frustration with the dictatorships incompetence,greed & repression is mounting rapidly pic.twitter.com/eSAr8Xrxpf

In Cuba, Castros are finally out of power and thus, the annihilated population has finally realized that the tyranny of the communist party can be brought to an end. Fidel Castro was the country’s top leader from 1959. After falling ill in the year 2006, he formally handed over the presidency to his brother in 2008. Fidel Castro succumbed to his deteriorating health in 2016 but his brother Raúl maintained the grip of Cuba’s Communist Party on power on the island. Now as Raúl has taken the backseat in the country’s ruling communist party, Miguel Díaz-Canel is seemingly facing uneasiness in suppressing the uprising.

Read More: A new Cuba is rising. The world is elated. But Biden and old Democrats are enraged

It was the July of 1956 when Fidel Castro’s ‘26th of July Movement’ became the nucleus of far-consequential revolution against dictatorial rule established by Fulgencio Batista, eventually paving way for the communist party to hold the sway over country’s politics. Now, it’s the July of 2021 that has brought the country on the verge of yet another political revolution, this time only to ouster the communist rule from the state.

Cuban economy remains ramshackle. Tourism, one of the most important sectors, has been devastated by the restrictions on travel during the Covid pandemic. Sugar is another major earner for the Cuban economy, but this year’s harvest has been disappointing. The lack of fuel and breakdown of the state machinery made bringing in the harvest difficult. Resultantly, the government’s reserves of foreign currency are depleted, meaning it cannot buy imported goods to supplement shortages.

The recent surge in protests also comes in the midst of gas, electricity, and vaccine shortages across the Caribbean island nation. The people in Cuba have an intuition that the world will come forward to embrace their country as the Castros are no longer leading the poverty-ridden economy. Recently, 184 out of 193 countries that make up the United Nations voted to end the blockade imposed on the island country for almost 60 years. The only two countries that voted in favour of the blockade are Israel and the US. That implies that the world is elevated by Cuba’s recent makeover.

The communist state, for decades, has invited the wrath of the United States which has continued the policy of retaining sanctions and arms embargoes on Cuba; literally helping the United States to maintain exclusivity over the country. Now as Castros are out, the United States has no immediate reason to continue the decades-old policy of exerting maximum pressure over the country using its ‘Sanction diplomacy’.  Now as the thousands of protestors take to the street against the current communist regime, the implication of this moment could imply the freedom of millions of people not just in Cuba, but in the communism-glutted region altogether.