A new Cuba is rising. The world is elated. But Biden and old Democrats are enraged 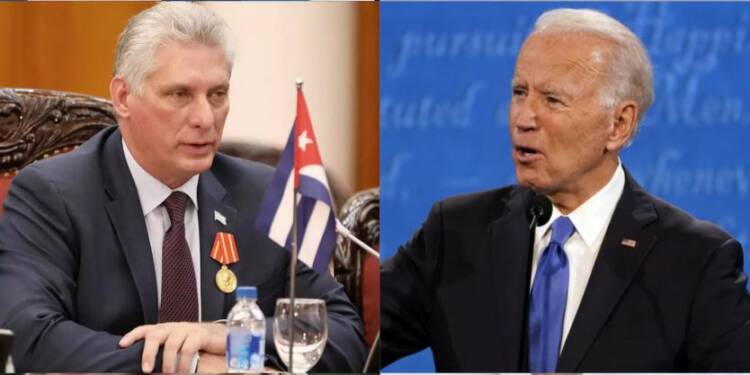 A new Cuba is on the rise. With the Castros out of power, the Central American nation is liberalising many sectors of its economy and the entire world is ready to embrace it. Recently, 184 out of 193 countries that make up the United Nations voted to end the blockade imposed on the island country for almost 60 years. The only two countries that voted in favour of the blockade are Israel and the US.

So, the world is elated by Cuba’s rise. But Biden and the old Democrats are enraged. Let us tell you why. Long story cut short, Biden and other anachronistic Democrats want to keep Cuba hostage. The Biden administration wants to continue the same old US policy and retain sanctions and embargoes that literally made Cuba a banana state, which would remain dependent on the US and largely cut off from the rest of the world.

Within Cuba, things are changing very quickly. In April this year, Cuba got a new leader. For a change, the recently appointed Cuban President is not a Castro.

Miguel Díaz-Canel, the newly appointed President of Cuba, has liberalised several sectors of the Cuban economy. In fact, the Central American country has approved a reform that includes long-sought legal status for private businesses that began operating decades ago under the title of “self-employed.”

According to Cuban state media, the Council of Ministers agreed to the measures at its latest closed-door session. The reform would include legal status for Cuba’s thousands of businesses, spread across at least 2,000 sectors.

Here’s what’s happening- the Biden admin has been stuck on the same old policy of handling Cuba. Meanwhile, Cuba has liberalized various sectors of its economy. Castros are gone. Cuba has a new leader. So, even if it is a Communist state, things are changing. It has created a market-friendly system like China, which is hardly Communist.

Miguel Diaz-Canel said, “With this decision we are approving how to organize the actors in our economy, which goes much further than the simple recognition of some of them.”

Cuba is therefore taking its first step towards a free-market economy. This means that even if Cuba is originally a Communist state, its economy is going to embrace free-market policies and the Central American nation would hardly remain a Communist economy system.

Cuba is promising a new, post-Castros era. With a new leadership and economic reforms, Cubans will no longer have to tackle destitution and suffering. The rest of the world too is eager to tap into Cuba’s economic potential. But for the Biden administration, things are different.

For decades, several US Presidents have pursued the same old policy of imposing embargoes on Cuba. Within the US establishment, there is a tendency to isolate the Central American nation in a way that ensures American exclusivity in Cuba.

Let’s go back in history to understand why the US still insists on embargoes against Cuba. Before Fidel Castro came to power in Cuba in 1959, the Cuban economy was largely controlled by American businesses. Even the utilities and railroads in the Central American nation were controlled by US corporations. Being the hardline Communist that Fidel Castro was, he nationalized everything in Cuba.

The US sanctions against Cuba was more of a retaliation against Castro’s move to nationalise businesses that were once controlled by the US. Ultimately, the US wanted to blockade Cuba and isolate it from the outer world. There were some loopholes in US travel bans against Cuba, so that American citizens could visit the island nation.

Then, there are domestic issues also. No President wants to mend ties with Cuba, because Cuban Americans who live in the US state of Florida tend to vote against candidates who support better ties with the Central American nation. Even Biden’s 2020 Florida campaign strategy was to speak as little about Cuba as possible. The fear of Florida clearly holds back Biden in his Cuba policy.

Yet, with liberalisarion and global support, Cuba is looking at a larger market to tap into. And there is every reason why the world must embrace Cuba now. The Central American nation is still a friend of Russia, but it is no longer a threat to world peace as it was during the Cuban missile crisis of 1962. Nor is there any evidence supporting the US claim that Cuba is a ‘State sponsor of terrorism’.

The fact remains that Castros, whose regime was the true enemy of the United States, are no longer in power. The US sanctions failed to bring down Castros anyway, and now there is no sense in continuing the same sanctions against a seemingly liberal regime. Ice can be broken between Cuba and the US. Yet, a stubborn Biden has decided to go ahead with the same old US policy, which has again backfired badly.

The world is happy with the rise of new Cuba. But Biden and old Democrats are enraged, because Cuba is no longer a US pie that could be held hostage with sanctions and embargoes.

The death of mainstream media in the United States