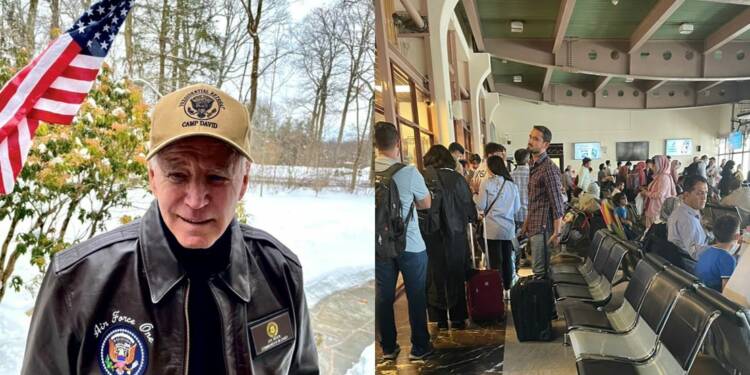 As Afghanistan falls to the Taliban, Joe Biden has abandoned American citizens. While he vacations and lets off some steam at Camp David, thousands of Americans are struggling to return to their country – to meet with their families and let go off the inconsequential Afghan horror that they were made to endure. Afghanistan has fallen, the United States has been defeated by the Taliban, and now, the most powerful country in the world led by Joe Biden is practically begging the Islamist organisation to allow safe and bloodless evacuation of all American citizens from Kabul.

The US military on Monday secured the perimeter of Kabul airport as its diplomats were being evacuated from war-torn Afghanistan amid the Taliban takeover. All embassy staff are located on the premises of Hamid Karzai International Airport. As Kabul fell to the Taliban, the United States issued an advisory for its citizens in Afghanistan, asking them to not travel to the airport until notified.

Since the embassy has been evacuated, it also directed Americans to not move towards the embassy and seek shelter therein. Instead, it told its citizens to seek shelter wherever they are. U.S. citizens wanting assistance in departing the country should register for any option that might be identified to return to the U.S., and must complete a Repatriation Assistance Request for each traveller in their group

How the U.S. plans to evacuate its citizens with such a directive in place is simply mind-boggling. The directive also cautioned Americans in Afghanistan against making any call for details or updates about the flights. It said that the repatriation form is the only way to communicate for flight options.

Amidst reports of Kabul International Airport under attack, US asks its citizens not to come to its embassy or the airport pic.twitter.com/LDmFbRTkMN

Which is where the kneeling before the Taliban angle comes in. Joe Biden has bent the knee before the Taliban. The man has shamed his entire country and has no moral right to continue as President. The people of America must decide now whether they want to be led by a man who has abandoned Americans in Afghanistan and made their country a subject of global ridicule, or by someone who will undo this massive embarrassment and take decisions which are at least sane and well-thought.

Joe Biden is too occupied vacationing at Camp David, while Americans flounder to save their lives in Afghanistan. The United States, in the past 20 years, has spent $3 trillion on Afghanistan. 241,000 people have been killed in the Afghan war. 2,442 U.S. soldiers have lost their lives. More than 20,000 U.S. soldiers have been wounded. An additional $90 billion was spent trying to prepare the Afghan forces for battle against the Taliban. Today, all sacrifices made by American soldiers and all of American tax money spent on Afghanistan has gone down the drain. It has amounted to absolutely nothing. In Afghanistan, America has faced its most horrifying defeat.