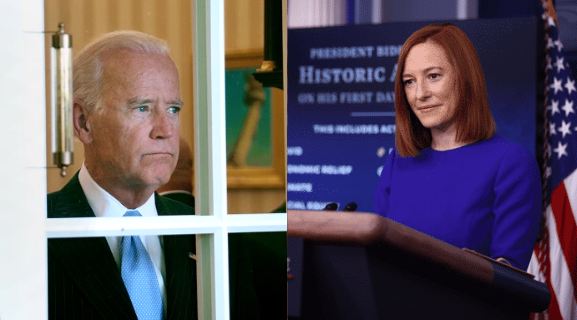 The situation in Afghanistan has solidified for the worst, and hope has left the capital. All of this has been the making of the Biden administration, which failed on every front and made the worst possible exit from a country where the US has invested so much. And while all this is going on, President Biden has retired to a resort. This is not it, given the White House Press Secretary too is on a week-long leave.

Jen Psaki, the White House press secretary, was supposed to respond to questions from reporters regarding the Taliban’s takeover of Afghanistan, but by signing off from work, she sidestepped her responsibility. An email sent Sunday evening to White House spokeswoman from the Washington Examiner elicited an automatic response from Psaki’s account, stating that she “will be out of the office” Sunday through next weekend. The fact that the President, as well as the Press Secretary, are out enjoying the week as a holiday, nothing could have been a worse statement than this to US allies the world over.

The request for comment included questions about Biden’s plans to address the situation in Afghanistan and take questions from the media. The automatic response did include information about reaching other members of the press shop for comment. Biden has been in Camp David in Maryland, where he has received reports from top US officials but is not available to the press.

The chaos which is unfolding in Afghanistan today is the output of the Biden administration’s mindlessness. Portraits of women are being covered in Afghanistan. Art and culture are being purged. Entertainment venues destroyed; Afghanistan now braces for the imposition of Sharia law in its most brutal form. Women are being sacked from jobs. People are being openly executed. Human rights violations are at an all-time high.

White House press secretary Jen Psaki said last week that Biden “likes Camp David.” She continued saying, “It’s a place to be outside, spend time with family and certainly has beautiful, beautiful scenery there.” Joe Biden’s vacation is taking a rather devastating toll on the Americans who remain stranded in Afghanistan. The US government has no concrete plan and is almost pleading with the Taliban to not harm American citizens. And to add to the woes, the press secretary too has left for a week-long vacation.

The timing of Psaki’s trip coincides with criticism of Biden’s decision to remain on vacation while the Taliban has grab control of Afghanistan, including marching into Kabul and seizing the presidential palace at a breakneck pace that has caught the White House off guard. The criticism has already started mounting up and even the most loyal press is finding it difficult to cover for them.

Earlier, Republican members of Congress criticized President Biden on Sunday for spending time at the Camp David presidential retreat instead of the White House. Rep. Lauren Boebert, R-Colo., accused Biden of “dereliction of duty.” Rep. Jim Banks, R-Ind., and Rep. Elise Stefanik, R-N.Y., also echoed the criticism, per Fox News. Two House Democrats also lambasted Biden for his casual approach to Afghanistan and the Taliban’s runover of Kabul. It’s obvious that both of these people have no answers and know hell will lose break if the press asks them questions live.