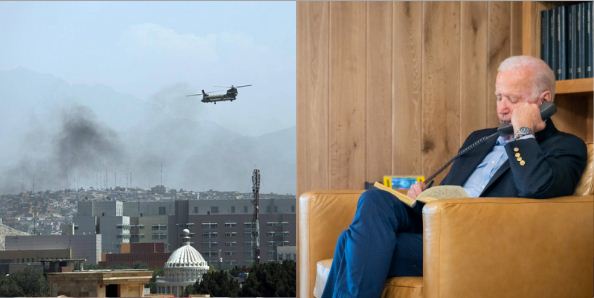 Afghanistan is burning. The chaos which is unfolding in Afghanistan today is the output of the Biden administration’s mindlessness. Portraits of women are being covered in Afghanistan. Art and culture are being purged. Entertainment venues destroyed; Afghanistan now braces for the imposition of Sharia law in its most brutal form. Women are being sacked from jobs. People are being openly executed. Human rights violations are at an all-time high. While such a crisis engulfs Afghanistan due to the disastrous policies and short-sightedness of one man, what do you think that man does?

Conventional wisdom would suggest the man would repent. He should ideally apologise, and take swift decisions to overturn the sequence of events taking place in Afghanistan. But this man is the world’s most powerful. He is the President of the United States of America. He is Joe Biden, and he is vacationing at Camp David presidential retreat in Maryland. Camp David has historically been used both for work and relaxation by U.S. presidents, and is fully equipped with secure video-conferencing technology. White House press secretary Jen Psaki said last week that Biden “likes Camp David.”

She continued saying, “It’s a place to be outside, spend time with family and certainly has beautiful, beautiful scenery there.” Joe Biden’s vacation is taking a rather devastating toll on the Americans who remain stranded in Afghanistan. The U.S. government has no concrete plan, and is almost pleading with the Taliban to not harm American citizens. That’s right. The U.S. – which is the leader of the free world and the most powerful country is kneeling before the Taliban, because its President continues to live in an alternate reality, where everything is slow, calm and utopic.

In fact, even when Biden did speak on the worsening situation in Afghanistan prior to the fall of Kabul, he sought to pin the blame for the entire mess on his predecessor, Donald Trump. Those aware of Donald Trump’s style of governance and foreign policy handling, however, know that he would have never let the Taliban assume complete control over Afghanistan while the civilian government flees to different parts of the world.

Read more: Two decades of nothing. Afghanistan is America’s worst defeat ever

Since the fall of Kabul to the Taliban on Sunday, Joe Biden has made no appearance, and neither has he briefed the media, as of the time this report was filed. The U.S. President remains missing in action as Afghanistan gets wrecked by the Taliban and yet another brutal Islamist empire is erected on the world map.

With his Taliban speech, Biden has given the 2022 elections to Trump on a golden platter