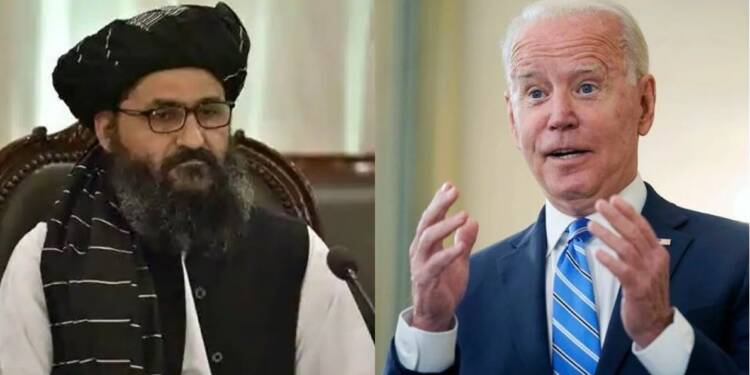 The Taliban has been able to successfully take over Afghanistan, with its terrorists sitting in Kabul and countries including the US are trying to get their people out. There is no doubt that the situation is a creation of Biden’s unplanned retreat from Afghanistan. While there was one weapon to take on the Taliban, Joe Biden has even made sure that it is no more a threat. Not legitimising the terrorist group would have dealt a huge blow economically and diplomatically making it impossible for them to function normally. However, he is now proposing help for legitimation as long as the US is allowed to bring out its people.

Joe Biden earlier made sure to backstab the very people who have supported the US actions and even accompanied them. Now he is trying to jeopardize the efforts of even other countries to make as many rescues as possible in addition to securing their citizens and diplomats. By making a bargain with the Taliban regarding legitimisation, it is giving the terror group an opportunity to ask for a similar deal from other countries in exchange for a safe passage for their respective rescue missions. And as countries will be accepting the deal in the coming days, Biden would have made sure that the Taliban get the red-carpet treatment.

The situation in Afghanistan has solidified for the worst, and hope has left the capital. All of this has been the making of the Biden administration, which failed on every front and made the worst possible exit from a country where the US has invested so much. And while all this is going on, President Biden has retired to a resort. This is not it, given the White House Press Secretary too is on a week-long leave.

Read more: As King Biden retires to a resort, messenger Psaki is off for a week

So, the Biden administration is making all these rash and detrimental decisions while he himself enjoys a retreat to Camp David. If Joe Biden goes ahead with trading recognition for the surety that the Taliban will let it get out in one piece, then it will also force other countries to follow suit.

Biden has already picked up a defeatist tone. In his August 14 statement, Biden went as far as saying, “Our hearts go out to the brave Afghan men and women who are now at risk. We are working to evacuate thousands of those who helped our cause and their families.”

The expression “our hearts go out” itself shows that the Biden administration has given up on Afghanistan. You can literally witness the President of the United States, who commands the most powerful military force in the world, implicitly accepting a defeat at the hands of a militant group like the Taliban.

Read more: With his Taliban speech, Biden has given the 2022 elections to Trump on a golden platter

In the statement, what Biden actually did was to seek permission from the Taliban for a safe exit of the US military forces. And no matter how hard Biden tries to convince about what he inherited from his predecessor; everyone knows that Trump wouldn’t have agreed to a hasty, unconditional withdrawal of troops from Afghanistan.

Even China has shown interest in collaborating with the Taliban in recent weeks. China stated earlier on Monday that its embassy in Kabul is still operational and that it is eager to help with Afghan reconstruction. Beijing’s foreign ministry refused to clarify whether it would accept the Taliban as the country’s new administration, but it did declare it would respect the Afghan people’s decision.

Joe Biden has made a huge blunder with its Afghanistan unplanned retreat, and by making a deal with the devil aka the Taliban and recognising them, he is only making the recognition of the terror outfit as the legitimate government of Afghanistan a cakewalk.