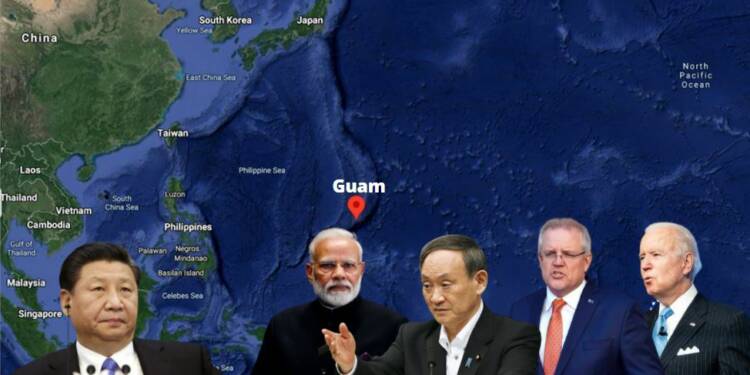 You should never let your enemy guess your weaknesses. And unfortunately for China, this is exactly what Xi Jinping administration has done. Xi’s China unwittingly gave away a big hint about how it fears America-controlled Guam Air Force base in the Pacific islands region. Now, Quad comprising the US, India, Australia and Japan are exploiting its fears of the pint-sized island.

This year, the Quad Navies will carry out the high-intensity MALABAR exercise off the coast of Guam from August 26 to 29. Indian Navy spokesperson Commander Vivek Madhwal said, “The Malabar-21 would witness high-tempo exercises among destroyers, frigates, corvettes, submarines, helicopters and long-range maritime patrol aircraft of the participating navies.”

MALABAR exercise at Guam is a deadly combo, which might give some sleepless nights to the Chinese People’s Liberation Army Navy (PLA Navy). China already dreads the annual MALABAR Navy exercise because the Communist nation feels that the exercise cuts it to size in the Indo-Pacific.

In fact, the very purpose of the Quad is to secure a free and open Indo-Pacific and it was in line with this spirit that Australia was added to the annual MALABAR Navy exercise last year.

Now, the Quad Navies are stepping up the game by choosing Guam as a venue for MALABAR-21. Firstly, the Guam island is strategically situated with Andersen Air Force base in the Guam island lying only 1,800 miles east of China.

If push comes to shove, the US Navy and Air Force can mount a devastating assault on China from the Guam island. Cooperation by other Quad countries in such a case would be major force multipliers.

In fact, one-third of the Island is already devoted to military purposes. Fighter jets, bombers, submarines and a missile defence system- the Guam Island has everything to make it an unsinkable aircraft carrier from which the US Navy and Air Force can pack quite a punch.

The location of Guam island is such that it effectively serves as a military outpost for the very close to China’s conflict zones in the South China Sea. While the US can effectively target Chinese territory from the Guam Island, the US military itself is not vulnerable to any Chinese assaults. The “First Island Chain”, a group of US-friendly islands stretching from Japan through the Philippines to Indonesia stonewalls the Chinese military.

In fact, China itself hasn’t been able to hide its anxieties about the Guam Island. Last year, Chinese People’s Liberation Army Air Force (PLAAF) released a shoddily prepared propaganda video that showed nuclear-powered H-6 bombers carrying out an assault on what looked like the Andersen Air Force Base located on the Guam Island. Beijing usually releases such propaganda videos when it is on the backfoot at the ground level and feels compelled to play dubious mind games.

Later, it was reported that a Chinese firm was looking to get involved in an undersea internet cable project in the region with a planned connection to the HANTRU-1 undersea cable that is used by the US government and lands at Guam. This was an evidence of how China wanted to undermine the Us military at the Guam island at any cost.

However, China’s tactics have been called out by the Quad. Having understood China’s vulnerabilities, the four Quad Navies will now train together at Guam and pile even further pressure on the Chinese PLA Navy.

If China thought that releasing a shoddily prepared propaganda video could scare the US and Quad away from the strategically located Guam island, it was badly mistaken. By giving away a big hint about its fears, China has only prompted the Quad to exploit its weaknesses regarding the pint-sized island in the Pacific.