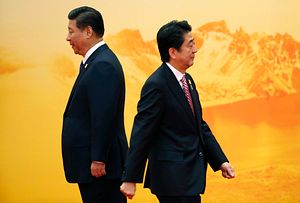 Many actions have turned disastrous for China under Xi Jinping. The attempts to intimidate Japan and build escalations in the East China Sea have made Japan seriously angry. Now in the face of the Japanese diplomatic offensive, Beijing has become so scared that, it has now put up North Korea to distract Japan away from itself. As per the latest reports, North Korea on Sunday accused Japan of “illegally intruding” into waters over which it exercises maritime rights and warned of possible “strong countermeasures.”

Japan has been pursuing a stringent anti-China line for quite some time now, and most recently, has even committed to protecting Taiwan militarily if the need arises. Former Japanese Prime Minister Shinzo Abe earlier this month stressed the need to preserve a free Taiwan and prevent it from being turned into the next Hong Kong. Now, as China finds itself trapped by the Japanese all front offensive, be it economic, diplomatic, international cooperation among others, it is trying to use North Korea as a diversion.

The subject was discussed on Saturday, in a conference attended by the Supreme People’s Assembly’s Standing Committee, the Korean People’s Army’s General Staff, the North Korean Foreign Ministry, and the Ministry of Land and Environment Protection, according to the report. Even though the article did not name particular incidents of Japanese encroachment in contested waters, it appears to be referring to the movements of Japanese fishing and coast guard vessels in locations where each country’s exclusive economic zones overlap.

North Korea has suddenly increased its offensive against Japan, and if one has even the tiniest understanding of the geopolitics of East Asia, then it is obvious that China has used North Korea as bait to deflect Japan’s anger towards it.

Read more: With the Olympics are done and dusted, Japan is back at mounting a massive offensive against China

Japan’s current Medium Term Defense Program, approved by the Cabinet of then Prime Minister Shinzo Abe in late 2018, sets aside roughly 27.47 trillion yen ($250 billion) with a stipulation that the plan can be reviewed after three years taking into consideration the security situation at that time. As three years have passed, Prime Minister Yoshihide Suga is doing just that – reforming his country’s Medium Term Defense Program, because of the immediate threat, China now poses to not just Japan, but across the East and the South China Sea, and of course, in the Taiwan Strait.

Earlier, North Korea has specifically only contested with South Korea, for some years. But now, the sudden diplomatic situation has made China use Pyongyang to engage with Japan while it takes a breather. China has faced multiple small yet significant defeats by Japan, be it the issue with Taiwan, supporting diversification of supply chains, among others.