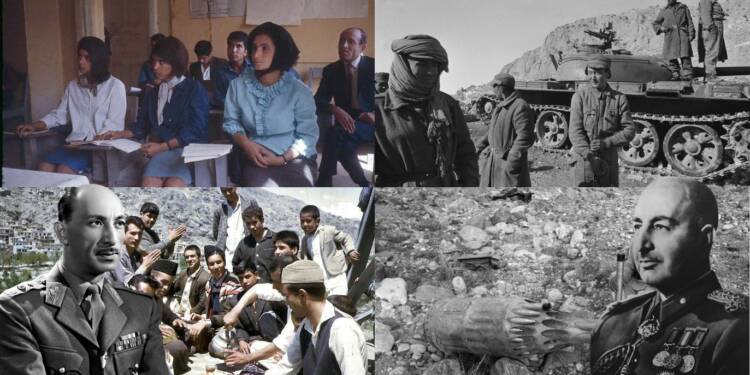 It all begins with the death of King Nadir Shah in 1933, owing to an assassination. Now, Afghanistan is among the most diverse countries in the world- which only further exacerbates its societal fault lines. Owing to this societal heterogeneity – and the hegemony of the Pashtuns in the country, who form the dominant community, Afghanistan has always been volatile, but never really war-torn as it is today. Like all diverse countries, Afghanistan learnt to live with its flaws, and so did the different communities. There are the Tajiks, comprising more than 27 per cent of the population. Then there are the Hazaras, who constitute close to 15 to 16 per cent of the population. There are also the Baloch, Uzbeks, Aimaqs, and others.

Among the Pashtuns too, there exist many subcommunities, like the Durranis, Yousafzais, Afridis and others. These tribes have historically been the ruling class in Afghanistan. Now, after the death of Nadir Shah in 1933, his son – Zahir Shah took over as the King of Afghanistan. However, he was hardly as strong a ruler as his father and owing to his ineptitude, the various ethnic communities of Afghanistan, particularly the subcommunities of Pashtuns grew a taste for sovereignty. Zahir Shah ruled Afghanistan from 1933 to 1973, when he was deposed by his brother-in-law, Mohammed Daoud Khan.

Mahammed Daoud Khan had served as Afghanistan’s prime minister from 1953 to 1963. Ten years later, in a coup d’état that overthrew the monarchy, Daoud Khan became the first President of Afghanistan, from 1973 to 1978. It was this coup that triggered nearly a half-century of coups, wars and invasions. He was the last of a 226-year dynasty of Pashtun monarchs to rule Afghanistan. Daoud Khan was a popular leader, however, he believed in a policy of non-alignment. He kept Afghanistan insulated from the outside world, and mind you, this was the time when the Cold War was raging and the entire world was either divided into the USA’s camp or that of the Soviet Union.

The Soviet Union had been interested in Afghanistan since the early 1900s, which became manifest in the form of the “Great Game” between Great Britain and the Soviet Union, wherein both competed for winning over Afghanistan. Mind you, the United States was not a power to be reckoned with by this time. However, during the reign of Daoud Khan, the USSR saw a real opportunity to add Afghanistan into its bloc, which is why it mollycoddled the then Afghan president.

Read more: Taliban: The Frankenstein monster that the US created

Due to an intensive Russian campaign to win over Afghanistan, and also military hardware aid provided by Moscow to Kabul, Afghanistan was practically driven into the cold war as a Soviet-ally. Daoud Khan, being the Pashtun that he was, wished to create a greater Pashtunistan, by incorporating the northwestern frontier province of Pakistan and making it a part of Afghanistan.

The Soviets, however, soon enough, grew an active interest in Afghanistan. By this, we mean to say that the Soviet Union begins openly supporting and arming the Communist faction in Afghanistan. From 1978 to 1991, the socialists, under the leadership of Mohammed Najibullah ruled over Afghanistan with the support of the Soviet Union. The story henceforth is largely known. In order to counter the Soviet proxy government which had been established in Afghanistan, the United States began arming, aiding and supporting the mujahideen and fundamentalist warlords of Afghanistan.

Also note this former U.S. Secretary of State admitting rather shamelessly to working with Pakistan for the creation of a mujahideen prior to the fall of the Soviet Union, which has today come back to bite America in the form of Taliban, at the behest of…wait for it…Pakistan!

The Soviets then invaded Afghanistan in 1979 to counter the growing influence of America-backed mujahideen. However, the mujahideen turned too strong, leading to a Soviet intervention in Afghanistan failing and its forces retreating in 1989. Soon after, the Soviet Union itself collapsed, and a major reason for the same was its defeat in Afghanistan.

The mujahideen grabbed power in 1996 as a coalition called the Taliban – which is the same violent extremist organisation that Joe Biden has now surrendered to after a 20-year long inconsequential war in Afghanistan. The mujahideen groups suffered infighting among themselves too, but eventually, what remained of them was still too powerful for Kabul to not fall. The Taliban ruled Afghanistan from 1996 to 2001 and imposed the Islamic sharia law in its most cruel form. Mohammed Najibullah was executed, and his body was publicly displayed – one among the many gory scenes which the world witnessed during the five-year rule of the Taliban.

The U.S. invaded Afghanistan in 2001 after the 9/11 attacks in pursuit of Osama Bin Laden and in order to exterminate Al Qaeda and other terror outfits. The U.S. forces drove the Taliban back into their caves, only for Joe Biden to surrender to the same violent organisation 20 years later. The U.S. fed a snake, but that snake grew too powerful and came back to bite it soon enough. Now, the Taliban is back in power, and the worst is yet to come.