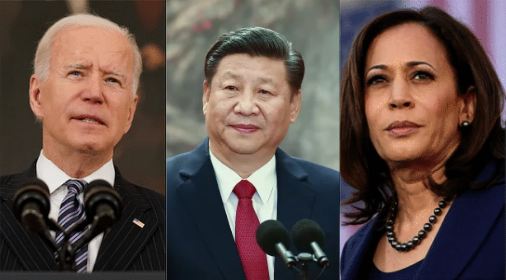 Joe Biden and Kamala Harris make a terrible team. In fact, it seems as if the two of them will end up demolishing America’s “superpower” status. First, Joe Biden gave away Afghanistan to the Taliban on a silver platter and now his lieutenant Kamala Harris has accepted China’s supremacy on America’s behalf in Southeast Asia.

Kamala Harris just closed her trip to Southeast Asia. Her trip was expected to repair the damage caused to Washington’s international image. However, by the end of her trip, China’s position got strengthened in the region whereas the US failed to assure its Southeast Asian allies. Neither Kamala’s statements nor her actions during the visit to Vietnam and Singapore can be described as a success.

During her visit, Kamala did accuse China of bullying its Southeast Asian neighbours. However, while speaking at Vietnam’s capital Hanoi, she added, “We welcome stiff competition, we do not seek conflict, but on issues such as the South China Sea, we are going to speak up.”

So, Kamala’s underlying message to Vietnam and other Southeast Asian allies is that the US no longer sees China as its rival. The Biden administration only views Beijing as a competitor and also welcomes competition with the Communist nation. So, China might keep impinging upon the sovereignty of Southeast Asian nations in the South China Sea, but the US will simply remain passive and indifferent.

The US Vice President went a step further and added, “We are going to speak up when there are actions that Beijing takes that threaten the rules-based international order.” Again, Kamala’s message to the ASEAN is rather defeatist. She has virtually exonerated China for its belligerence in the disputed waters of the South China Sea.

Kamala told Vietnam, Singapore and other Southeast Asian nations who face Chinese intimidation that Washington will speak up if and when China threatens the international rules-based order. So, the US Vice President impliedly suggested that China isn’t presently violating the international law in the Southeast Asia region. She also made it clear that the US will only speak up and didn’t assure America’s allies of any material help in case Beijing resorts to hawkish behaviour.

Throughout her botched up Southeast Asia trip, Kamala only exacerbated ASEAN’s fear of betrayal by the United States. In addition to Kamala’s defeatist remarks, the Biden administration also allowed China to carry out a small diplomatic coup that seemed to assert China’s supremacy in the region.

Kamala’s departure from Singapore to Vietnam was delayed by three hours. The US Embassy in Hanoi attributed Kamala’s delayed arrival in Vietnam to the mysterious “Havana Syndrome,” a condition of unknown origin that has already sickened at least 200 US officials with nausea, migraine and memory lapses.

Looking at the Biden administration’s sheer incompetence and unreliability, the Vietnamese Prime Minister also told the Chinese Ambassador that Vietnam doesn’t take sides in foreign policy. This was, of course, the biggest jolt to the United States during Kamala’s visit to the key region.

China wanted to make a diplomatic statement by meeting the Vietnamese Prime Minister before Kamala, and the Biden administration allowed China to carry out a small diplomatic coup.

The incident is highly symbolic and shows how the US is letting Beijing assert primacy over the Southeast Asia region. A day later, Kamala met the Vietnamese Prime Minister and pledged a donation of 1 million Pfizer vaccine jabs to Vietnam.

To make things worse, Kamala committed another blunder. The Biden administration maintains that US-Vietnam ties won’t move forward unless Hanoi comes clean on its human rights track record. Kamala said that she again raised this issue. The US Vice President said, “We will not shy away from speaking out, even when those conversations, may be difficult to have, and perhaps difficult to hear.”

What Biden and Kamala don’t understand or maybe don’t want to understand is that the biggest issue in the Indo-Pacific today is Chinese belligerence. Bullying its allies and partners won’t help the US in challenging an authoritarian giant like China. To be blunt, such condescending remarks by Biden, Harris and other Democrats only pushes US allies in the region towards China.

What Kamala said and did on her Southeast Asia trip is not the only issue. She was also quite timid in her outreach which seemed to suggest that the US-ASEAN relations have no real future.

The Guardian quoted James Crabtree, executive director of the Asia branch of the International Institute for Strategic Studies, a thinktank, as saying, “judging from what’s been said by Harris on this trip, there was little sign of the kind of big ideas and ambitious new proposals needed truly to compete with China in this part of Asia.”

Kamala did propose partnerships with Southeast Asian countries in defence, climate crisis, cybersecurity, supply chain resilience, and health security sectors. However, her proposals were too vague, unclear and lacked the determination to take on the China threat.

At the end of the day, Kamala has given a very pessimistic message to ASEAN- you are supposed to tackle the China threat yourself, as the Biden administration will not fight China in order to make the region safe and secure.