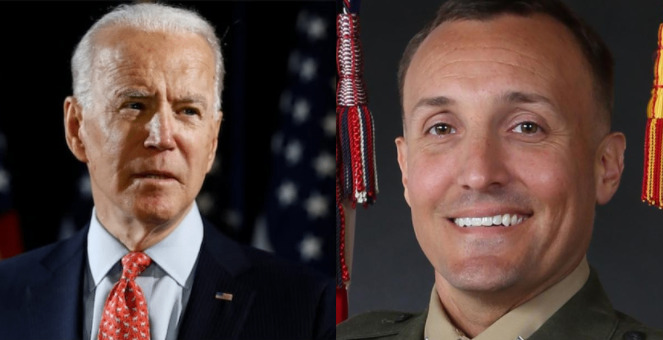 Joe Biden could not manage the media, in the face of such a catastrophic and disastrous US retreat from Afghanistan. The sorry scenes of the city of Kabul are making Americans angry and sad at the same time. Recently, a Lieutenant Colonel was sacked after he took to social media to launch a scathing attack on Vice President Joe Biden and military commanders, accusing them of being responsible for the deadly withdrawal from Afghanistan.

This is just one addition to the increasing rhetoric among the people that the Biden administration is squarely responsible and the fact that Biden is not at all willing to recognise the blunder that was committed. As an anti-government wave is sizzling, even in the US military, Joe Biden must resign if he wants to prevent the collapse of the country.

Active-duty Marine Lt. Col. Stuart Scheller fired attack after attack on US military and Joe Biden’s administration leaders for their deadly handling of the pullout from Afghanistan in an extraordinary five-minute video broadcast to social media. Lt. Col. Stuart Scheller chastised senior figures for allowing an estimated 170 Afghan citizens and 13 US Marines to be killed in a suicide bombing on Thursday, one of whom was only 20 years old and expecting a child in September, and, for abandoning Afghanistan to the Taliban before questioning key military strategic decisions that have given the Taliban access to over $85 billion in US weapons.

The marine also questioned the strategic decision-making of military authorities involved in the withdrawal in great detail. He slammed the abandonment of the former US-run Bagram airbase, which the Taliban have subsequently captured and pillaged. These actions led to reactions. Major Jim Stenger, Marine Corps spokesperson, told DailyMail.com in a statement that Lt. Col. Stuart Scheller was relieved of command by Col. David Emmel, Commanding Officer of School of Infantry-East. He said the decision was made “due to a loss of trust and confidence in his ability to command.”

As the news of the Taliban seizing the Afghan capital surfaced, it made the Army veteran, Kim Enderle, grieve. He said, “I’m sad for the people who lost their lives,” said Enderle, who served in the military for 25 years before going to Afghanistan as a contractor. “I’m sad for the people that continue to live there, that have had a taste for 20 years, what a difference they could experience, perhaps under a democracy similar to ours.” “Especially the women.”

Some veterans believe that the Taliban’s return was unavoidable, but they are frustrated that the government fell apart with little to no opposition and that the US did not do more to assist Afghans in fleeing. Now as we know, Joe Biden might have done it intentionally as an earlier TFI report has mentioned that he did not care at all.

The USA is already reeling with multiple disasters, be it the uncontrolled entry of illegal immigrants from the southern borders, the forced steamrolling of legislations, changing the curriculum to the will and wish of the socialists and extreme left, jeopardizing the country’s future. However, the botched exit from Afghanistan and the accompanying mess has made it hard for even the most loyal Democrats and their sympathisers in media and Hollywood to defend the Biden administration. Public opinion is swaying away from the democrats even faster as now even the veterans and their near and dear ones feel that they have been wronged by Joe Biden.

These developments when assessed with the current socio-economic situation makes it clear that there are increasing problems. And now, as the anti-government wave gains momentum, going ahead, Joe Biden will need to resign to get it resolved.