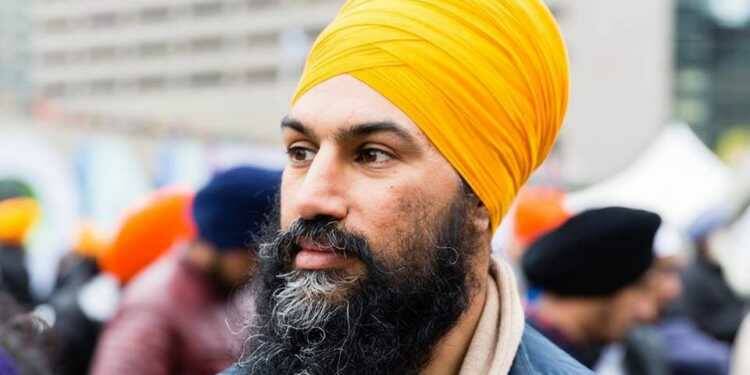 Political leaders with ties to Pakistan’s Islamist regime and the country’s intelligence agency ISI can come to power in Canada very soon. NDP leader Jagmeet Singh – a Sikh secessionist who has in the past shown support for the ridiculous idea of an independent Sikh state being carved out of India has emerged as the most popular leader in Canada, trumping Justin Trudeau, who faces a career low. With the rise of the NDP and Jagmeet Singh as Canada’s most favoured political choices, while India will have quite a headache to deal with, Ottawa too might just find itself dealing with serious problems it never really anticipated.

An Ipsos poll conducted exclusively for Global News found Jagmeet Singh was the only party leader who was viewed more positively than negatively in Canada, with 45 per cent approval versus 39 per cent disapproval among those surveyed. Trudeau, by contrast, had the highest unfavorability rating of any leader at 53 per cent, while 41 per cent said they viewed him favourably.

The most recent survey shows Singh is outperforming Trudeau among voters aged 18 to 34 — 53 per cent of whom viewed the NDP leader favourably, versus 44 per cent for Trudeau — and those aged 35 to 54 (42 per cent versus 37 per cent). Both demographics are key to the Liberals’ and Justin Trudeau’s success. Meanwhile, even the Conservatives are getting their act together, and their position is getting strengthened with every passing week. Trudeau, therefore, is fighting a two-front war, and being the man that he is, is most likely to lose embarrassingly.

Jagmeet Singh could very well become the Prime Minister of Canada, given the current political atmosphere of the North American country. This would put radical Sikhs or those who are referred to as Khalistanis in India, in charge of Canada. That could prove to be a disaster for Canada, which is itself battling multiple secession movements, without much success.

The Khalistan movement is a Sikh separatist movement seeking to create a homeland for Sikhs by establishing a sovereign state, called Khālistān (‘Land of the Khalsa’), in the Punjab region. The proposed state would consist of land that currently forms Punjab in India and its neighbouring states. With the financial and political support of the Sikh diaspora (including in Canada), the movement flourished in the Indian state of Punjab through the 1970s and 1980s. However, the movement was successfully defeated by India by the 1990s.

Read more: K2 (Kashmir-Khalistan) plan to unsettle India is being hatched by an unholy nexus of Turkey and Pakistan

The idea of Khalistan, however, continues to fascinate Sikhs outside India, particularly those in Canada and the United Kingdom. Jagmeet Singh and his coterie are among those Sikhs who would like to see India divided and the establishment of a sovereign Sikh state called Khalistan. The idea of Khalistan is a figment of imagination that will not be realised, at least within India. However, Pakistan and the ISI continue to support the movement, or whatever is left of it. Pakistan holds sway over some radical Sikhs outside India, and these are the ones who push for Khalistan the most. While Jagmeet Singh coming to power is not an ideal situation for India to be in, New Delhi will unapologetically ensure that a Khalistani-led government of Canada is isolated globally.

India’s ties with Canada would head into the deep freeze, and New Delhi would be forced to lobby against Jagmeet Singh’s government internationally. This will only spell trouble for Canada’s fortunes. Canada is struggling with separatist movements in multiple provinces, particularly in the French-dominated Quebec. It is also faced with secessionist movements in Alberta, Saskatchewan, British Columbia and others. If the Khalistan-backers rise to power in Canada, what is to stop them from launching a separatist movement within Canada itself?

Already, Jagmeet Singh is showing signs of not being committed to the cause of Canada’s welfare, and instead, has missed no opportunity to demonise it. In June, a Muslim family was brutally murdered in Ontario allegedly by a person in his twenties. Canadians of all stripes and persuasions condemned the tragic murders. Yet, Jagmeet Singh went a step further to say, “Our Canada is a place where you can’t walk down the streets if you wear a hijab because you will be killed.” He made it seem as if violence against minorities is commonplace, which is simply not the case.

Such Pakistan-controlled leaders cannot be allowed to rise to power in Canada. While India will be able to deal with a hostile government in Canada, the people of Canada might just end up suffering big time.