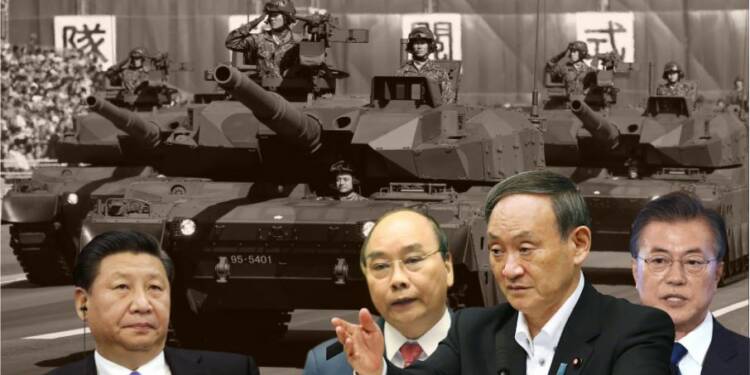 While the world remains fixated with the Middle East and Afghanistan, a relatively peaceful part of the world is witnessing rampant militarisation. We are talking about East Asia and Southeast Asia. China, the biggest authoritarian power in the region, has been bullying and harassing other countries in the region.

Chinese aggression throughout East and Southeast Asia has been a consistent problem in the region. Chinese warships and fishing militia routinely harass countries like Japan, South Korea, Vietnam, the Philippines, Malaysia and Indonesia in the East China Sea, the South China Sea and the Yellow Sea. But now all such victims of Chinese aggression in the region are pushing back against Beijing by ramping up their military firepower and announcing record defence budgets.

Well, the dispute between the Association of Southeast Asian Nations, that is the ASEAN, and Beijing has been making headlines for over a year now. At the root of the ASEAN-Beijing rivalry is the South China Sea dispute. China, Taiwan, the Philippines, Vietnam, Malaysia and Brunei claim several distinct features in the South China Sea against one another.

Southeast Asian nations are US allies. Yet, they buy most of their arms from Moscow. Russia is the largest arms exporter in the region. Over the past two decades, it has sold US$10.7 billion worth of military equipment to the ASEAN countries. The US comes a distant second at US$7.9 billion. Meanwhile, India, which is positioned as China’s biggest enemy in Asia, is also offering its arms and military equipment to smaller nations in Southeast Asia.

To be precise, there is no arms race going on in Southeast Asia. All the South China Sea disputants in the ASEAN region are buying arms that are directly targeted at Beijing.

If Chinese ships have meandered into any region as frequently as they meander into the South China Sea, then it has to be the East China Sea. Beijing has been trying to bully Japan near the Senkaku Islands for over a year now. Japan had purchased the strategic islands located in the East China Sea from a private owner in 2012. However, China claims sovereignty over the Japanese islands and its ships routinely intrude into the Japanese waters.

For Tokyo, negotiations with China doesn’t seem like a prudent option and the Japanese government is increasingly relying on the enhancement of its military capabilities. Presently, Japan’s Defence Ministry is seeking a record $50 billion budget, which would amount to an unprecedented 2.6 per cent jump in the country’s military spending.

Japan is also ditching the psychological barrier of restricting defence spending to 1 per cent of the GDP, which was essentially a fallout of the post-war pacifism. Japan’s Defence Minister Nobuo Kishi told Bloomberg that the government would spend whatever is necessary, without mandatory maintaining the one per cent ceiling.

Some of Japan’s big plans include spending US$765 million on space-related projects, buying eight Lockheed Martin F-35A warplanes and four F-35B warplanes at a combined cost of over US$1.1 billion.

The maritime disputes between Seoul and Beijing don’t get reported as often as the Senkaku dispute or the South China Sea dispute. However, Chinese belligerence against South Korea in the Yellow Sea is just as blatant and objectionable. There is an imaginary line of longitude- the 124th meridian East that divides Korean and Chinese maritime zones. It has no recognition in international law but has been traditionally honoured as the point of separation.

However, an expansionist China doesn’t care about international traditions, conventions or even laws. As per data from South Korea’s Joint Chiefs of Staff (JCS) and the Navy, Chinese Navy patrol ships are seen around the 124th meridian East on an everyday basis. Chinese naval surveillance planes routinely fly in the skies above the 124th meridian.

So, what is South Korea doing about China? Well, you must have guessed it by now. Seoul is acquiring lethal arms to deter Chinese aggression. South Korea’s Ministry of National Defense has proposed a defence budget of US$47.6 billion for 2022, which effectively implies a year-on-year hike of 4.5% in the country’s military spending.

South Korea plans to equip itself with tactical nuclear weapons, nuclear-powered submarines, and hypersonic missiles, in a clear plan to take on the paper dragon.

Apart from the East and Southeast Asian rivals of China, Australia is also spending heavily on its defence forces. This year the country announced a whopping $44.6 billion defence budget. Again, Australia is looking to acquire long-range missiles and hypersonic missiles, apart from revamping its ageing submarines in a clear attempt to blunt Chinese aggression in the Indo-Pacific. From East Asia to Southeast Asia and Oceania, almost all Chinese rivals are hitting back at Beijing’s maritime aggression. All of China’s rivals in the region are thus readying to give it a bloody nose.