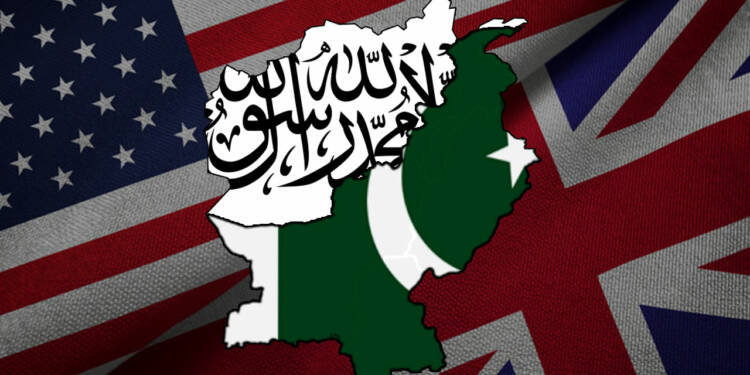 What the West is doing in Afghanistan continues to surprise us. Now, Dominic Raab, the UK Foreign Secretary, has announced that Britain will give £30 million ($41.55 million) to Pakistan in aid to help Afghan refugees fleeing a wartorn Afghanistan after the Taliban’s resurgence. So, Britain supposedly wants Afghan refugees to stay in Pakistan, instead of allowing them to come to Britain. At least, this is the narrative that London is selling.

Pakistan is the same nation that used to train the Taliban to kill American and British troops who were fighting the Taliban in Afghanistan over the last two decades. So, we ought to ask this- are Western leaders really this dumb to continue gifting millions on the very nation that backstabbed them? Well, it is actually not so tricky. The way Afghanistan was invaded by the West and the shoddy retreat clearly show an intention to destabilise India and Russia. And so Pakistan’s brazen terrorism is given a pass time and again.

The West funds Pakistan despite its involvement in terror activities

By exiting Afghanistan in a shoddy manner and enabling the Taliban to take over the wartorn country, US President Joe Biden has already given a lot of leverage to Pakistan. And Pakistan is unabashedly willing to use the Taliban for controlling Afghanistan.

Now, the UK is preparing to give Pakistan enormous leverage with the Taliban. Just like Turkey gets a lot of Western money for hosting Syrian refugees, while also using ISIS fighters as proxies in its regional wars, Pakistan will be given generous aid to host Afghan refugees while it also uses Taliban fighters for its regional goals. Pakistan is also known for recruiting more terrorists from amongst these Afghan refugees.

But the West is amnesiac and is acting as if it doesn’t understand that Pakistan played the role of a facilitator in the Taliban’s resurgence. However, in reality, it is funding Pakistan knowing fully well that the money will not be used for the Afghans but for the Pakistan-based terror factories. This is what Pakistan has been doing with the US and other NATO members till now.

In fact, when the US waged the war on terror in Afghanistan after the 9/11 terror attacks, Islamabad kept embezzling American aid money to help the Taliban kill American and other Western troops on Afghan soil.

At the end of the day, UK may not be happy with the objectionable manner in which Biden withdrew from Afghanistan. But strategically, it doesn’t mind the Taliban’s victory and is simply refusing to undermine or even censure the extremist group.

There is an active pro-Pakistan lobby and a strong pro-Pakistan narrative in the United Kingdom. This lobby is presently backing Pakistan with all its vigour and is also responsible for legitimising the Taliban. Again, it is Pakistan which bats eagerly for the Taliban. So, the intimate relationship shared by the Taliban, Pakistan and the West becomes clear.

He added, “We may well discover, if we give them the space, that this Taliban is of course more reasonable but what we absolutely have to remember is that they are not a homogenous organisation – the Taliban is a group of disparate tribal figures that come from all over rural Afghanistan.”

Meanwhile, there are some unconfirmed reports about UK military veterans committing suicide followed by the chaotic withdrawal of American troops from Afghanistan. So, the UK army chief thinks that the ‘new’ Taliban is “more reasonable”, but British military veterans seem to respectfully disagree.

Meanwhile, the West can’t help empowering Pakistan and the Taliban. Taliban spokesman Suhail Shaheen said, “The U.N. delegation promised continuation of humanitarian assistance to the Afghan people, saying he would call for further assistance to Afghanistan during the coming meeting of donor countries.”

While the entire Western political regime is putting money in Islamabad’s pocket, Pakistan keeps helping the Taliban and even Al-Qaeda which has resurfaced despite Biden’s reassurances that it was defeated. Recently, Pakistan used armed drones to bomb the Northern Resistance Front (NRF) which was showing stiff resistance against the Taliban and Al-Qaeda till now.

Pakistan’s agenda is clear- help terror groups today, use them as leverage tomorrow. However, the West is refusing to acknowledge Pakistan’s role in emboldening the Taliban. The entire Western political regime is silent about the Taliban and isn’t acting against Pakistan either.

What is the West’s interest in brazenly supporting Pakistan?

At the end of the day, Pakistan is a creation of the British empire. It was carved out of an undivided India in such a manner that the British made certain geostrategic gains.

Firstly, the British made sure that the division of undivided India created some chaos and weakened India. It was visible during the 1947 partition of India, during which large scale rioting, mass murders and rapes became a common sight. Cyril Radcliffe, the man tasked to finalise the partition, had no real clue about the subcontinent but he drew lines on the map that for the British, would have tremendous geopolitical significance.

So, the maps were drawn up arbitrarily and all that the British tried to achieve was the creation of an Islamic Republic between a Communist USSR and a Hindu-majority India. At the end of the day, India was the prize. As long as the British stayed in India, Russians were just waiting for an opportunity to invade British India. While leaving India, the British still wanted to keep Russia at bay.

So, West Pakistan was a buffer state, but it was supposed to do the bidding of the Britishers in South Asia. This is why the British empire continues to support Islamabad. In fact, East Pakistan or what is Bangladesh today was drawn on the other side of India, effectively surrounding India with a hostile regime. It is another thing that India aided the independence of Bangladesh from the Pakistani rulers and broke Pakistan up in 1971, significantly reducing the constant two-front war threat it faced. Yet, West Pakistan continued to serve its purpose for the West.

Slowly, the British empire did recede in the last century and the US took over as the main global power. However, all through the Cold War, Washington inherited many British policies and values, which continue to date. The US-UK alliance is too strong and stands tall even today. Wherever the US goes to war, the UK comes along.

Since the West built Pakistan for its own purposes, it has continued the policy of protecting Pakistan and never going tough on the terrorist country. It serves their agenda to go soft on Islamabad.

This is the reason why the West did nothing about Pakistan’s attempts to build a nuclear weapon. On the other hand, it kept trying to contain India and its nuclear programme. In Afghanistan, the West ensured that the Soviets don’t rise. So, it created the Taliban with Islamabad’s help. In the meantime, Pakistan, their non-NATO ally, was allowed to turn nuclear.

Mujahideens were created from Pakistan at the instance of the American establishment. These radical Mujahideens were then spread over Pakistan and Afghanistan, especially in the Pashtun belt. Now, the West and Pakistan may not agree, but Islamabad did have a role to play in Afghanistan’s heart-wrenching decline. The West, on the other hand, wanted Pakistan to do its dirty work.

The British were in on whatever the US and Pakistan were doing in Afghanistan. In the 1990s, Pakistan kept going rogue but the West wouldn’t sanction the terrorist country. Even when Pakistan backstabbed the West, the latter did not hit back. When the West did sanction Pakistan, it lifted them very quickly. Today Iran faces “maximum pressure” and calls for a nuclear deal, but Pakistan invariably got a long rope.

The West wants to use Pakistan to create a major headache for Russia by keeping entire Central Asia at the risk of infiltration and radicalisation by Taliban fighters. On the other hand, the West doesn’t mind if Pakistan mounts a terror threat against India. For the Western Deep States, India was not always very acceptable because it developed a good relationship with Moscow partly because it sensed hostility from the pro-Pakistan West.

Empowering Pakistan will backfire for the West

The West thought that by empowering Pakistan, it can create a security situation against Russia and India. At the end of the day, the vested interests in Western governments have a tendency to destabilise Russia as well as India, driven by 20th-century policies that are now bound to backfire and need revision. India is a regional power that fights the Chinese threat at a more realistic, physical level than the US or UK. Meanwhile, it has an independent and robust foreign policy that has developed brilliant strategic ties with the United States and the UK. It’s an undeniable fact today that containing India is not in the interest of the West. India also strengthened the US-backed civilian government of Afghanistan by pouring in billions.

But the West is literally allowing a terrorist nation, Pakistan to control its Western neighbour Afghanistan, which is already allowing groups like Al Qaeda to get revived. If Al Qaeda becomes powerful, more Western lives will be at risk and both the US and the UK will suffer. But at the end of the day, whatever is happening in South Asia is just a huge geopolitical game for the Western Deep States. They don’t care about anything else, including the lives that have been destroyed or might be destroyed in the near future.

Even as the people slowly realise the folly of their policymakers, the Western governments want the Taliban to stay and Pakistan to become stronger. They believe this would restrict Russia and India. In the process, they end up making decisions that put innumerable lives at risk.