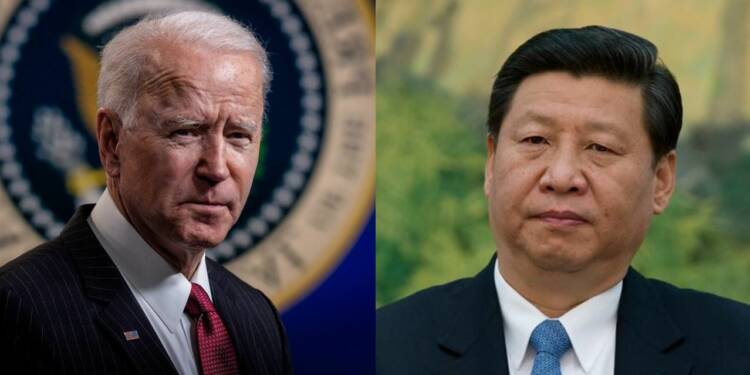 After successfully thwarting US President Joe Biden’s half-hearted attempts to thoroughly investigate into Covid-19 origins, China has now shifted its focus on putting the US in the dock. From state media to the Chinese foreign ministry, each and every organ of the Chinese state apparatus has busied itself in making a strong case about the Covid-19 getting unleashed from within the US territories. And like this was not enough, China has now reportedly engaged itself in mobilizing fake protestors around Covid-19 concerns in the US to boost its anti-US campaign of declaring Washington as the originator of the deadly disease.

As per a report by The Hill, a wide-ranging group of pro-China influencers is attempting to use Social media and other forums to propagate its ‘US-origin’ theory and even to mobilize physical protests around the US. Cybersecurity group Mandiant Threat Intelligence has found evidence suggesting that these groups could be using 30 social media sites and 40 other websites and forums to reach out to the masses and propagate their fabricated stories weaved carefully in Beijing.

“We have observed extensive promotion of Russian, German, Spanish, Korean, and Japanese-language content on U.S. and non-U.S.-based platforms, in addition to the typical English and Chinese-language activity that has been widely reported on,” the Mandiant researchers remarked in the blog post detailing their findings.

“The attempt to physically mobilize protesters in the U.S. provides early warning that the actors responsible may be starting to explore more direct means of influence and may be indicative of an emerging intent to motivate real-world activity outside of China’s territories,” the researchers further wrote.

This is indeed a mind-boggling assessment. Even the prospects of the China-funded and China-engineered fake protests in the US should have set the alarm bells ringing in Washington; instead, the US president Joe Biden meekly talked of avoiding a “conflict” with China in a recent phone call with Chinese President Xi Jinping.

China’s politically motivated campaign of shifting the blame of spreading this pandemic over to the US stems from Biden’s botched-up Covid-19 investigation that not just failed to reach any conclusion but also handed over a stick to China to beat the US with.

In an article published by Global Times on August 15, titled, “Conspiracy theory or reasonable skepticism? Why we should demand an investigation into US labs for origins of COVID-19,” the CCP made a case for WHO and other agencies to investigate US labs from where China thinks Covid-19 escaped.

Global Times also did a piece in which it blamed India and its scientific community for being among the first who pointed towards China’s culpability in allowing Covid-19 to spread across the world. The piece, titled, “Source of rumor pinpointed: India-based ‘science enthusiasts’ weave ‘Wuhan lab leak’ lies using online content to feed Western media,” insinuated that India and the West were hand in glove in defaming China.

Read More: Biden could declare the US as the originator of Covid-19 virus to please Jinping 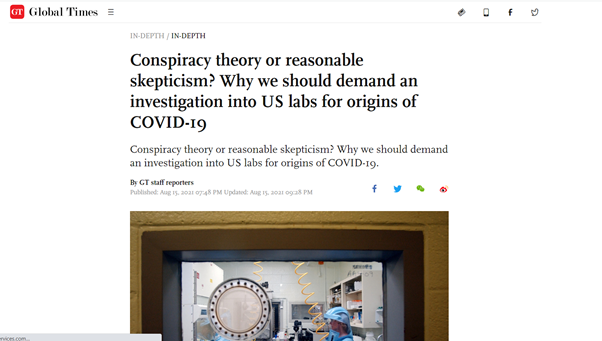 The Chinese Foreign Ministry even went as far as saying that 12 countries are claiming their Covid-19 “patient zero” was imported from the US.

Earlier this year, the president had ordered its intelligence community to gather evidence under the probe into the origin of Covid-19, a summary of which was released last month.

The botched-up investigation carried out at Biden’s behest piteously failed to solve the Covid lab-leak theory. The report also ruled out the possibility of the novel Coronavirus being genetically engineered to create a biological weapon. The doubt still remains on two theories – of whether Covid-19 came from a lab in China or whether it jumped from an animal to humans naturally.

Essentially, the most important investigation of the world, tasked with finding out the origins of Covid-19, failed at its task of providing a clear-cut answer to the people, of whether the Sars-Cov-2 virus strain leaked from a laboratory or whether it naturally transmitted from an animal species onto humans. And worse, bellicose diplomats and media in Beijing got the fortune moment of mocking the USA’s attempts of declaring China as the virus origin. The failed investigation re-energized their anti-US campaign to such an extent that now the Chinese authorities are planning to orchestrate the large-scale anti-US protests on American soil.