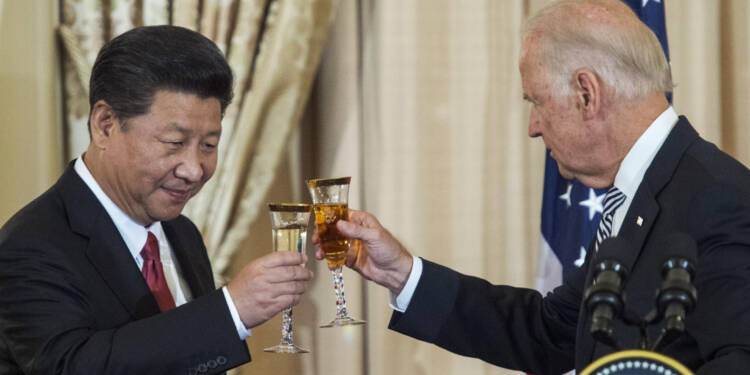 Covid-19 has been around since 2019. We all know where Covid-19 originated. We know which country is responsible for wreaking havoc across the world. Millions are dead, millions are infected even now. And yet, there has been no official and incriminatory confirmation of where the virus actually originated from. Mind you, everyone knows the truth. Even President Joe Biden and his Democrats know who is to blame for this global catastrophe. But they just do not have the spine to name and shame the country responsible for the deaths of millions of people. Joe Biden is no Donald Trump, and therefore, he cannot even imagine standing up to China. In fact, in his desperation to woo China and defame Trump, Joe Biden seems to have partnered with Xi Jinping.

A glowing testament to the Biden administration’s indecisiveness has come in the form of an inconclusive assessment about the origins of the Covid-19-causing virus following a 90-day investigation ordered by President Joe Biden, according to an unclassified summary of the probe released publicly on Friday. However, two possibilities have been ruled out by the US intelligence community, and both of these assessments favour China. First, the intelligence report has ruled out the possibility of the novel Coronavirus being genetically engineered to create a biological weapon.

Second, the intelligence community has concluded that Chinese officials did not “have foreknowledge” of Covid-19 before its 2019 outbreak. The doubt still remains on two theories – of whether Covid-19 came from a lab in China or whether it jumped from an animal to humans naturally. There is consensus among the intelligence agencies that the two prevailing theories are plausible, however, nothing definitive has been agreed upon. Essentially, the most important investigation of the world, tasked with finding out the origins of Covid-19 has failed at its task of providing a clear-cut answer to the people, of whether the Sars-Cov-2 virus strain leaked from a laboratory or whether it naturally transmitted from an animal species onto humans.

However, what the intelligence community has definitely established, much to the pleasure of Beijing, is that Covid-19 is not a biological weapon and that it has not been genetically engineered. Furthermore, CCP officials have also been given a clean chit by the Biden administration and the US’ intelligence agencies, which by the way, fall under President Joe Biden.

According to the report, four members of the US intelligence community say with low confidence that the virus was initially transmitted from an animal to a human. A fifth intelligence agency believes with moderate confidence that the first human infection was linked to a lab. One of the agencies that did not take a firm position one way or the other was the CIA. Is the CIA today so incapacitated that it cannot even conclude whether one theory of Covid-19 origins has more weight than the other?

Meanwhile, in a report released by Republican lawmakers earlier this month, China was incriminated beyond relief. The report said there was a “preponderance of evidence”, which proves the virus that caused the Covid-19 pandemic leaked from a Chinese research facility. The report, also cited “ample evidence” that Wuhan Institute of Virology (WIV) scientists — aided by US experts and Chinese and US government funds — were working to modify coronaviruses to infect humans, and such manipulation could be hidden.

While the Biden administration does all in its power to shield China, the Chinese Communist Party is going overboard with anti-American propaganda. It is known already that China pins the blame of the Covid-19 on the United States. However, in the past month or so, or roughly for the duration that the US Intelligence community was investigating the origins of Covid-19, the CCP deployed every method in the book to tarnish America and insinuated that it was the United States where Covid-19 first emerged, and that the Trump administration somehow failed to contain its spread.

Well, isn’t such a narrative convenient for both China and the Biden administration? Donald Trump and his administration are being made out to be the evil. While China continues with the false and bogus claim of Covid-19 having originated in the United States, Joe Biden is not even able to get his intelligence agencies to incriminate China for its handling of the Covid-19 breakout in Wuhan.

In an article published by Global Times on August 15, titled, “Conspiracy theory or reasonable scepticism? Why we should demand an investigation into US labs for origins of COVID-19,” the CCP made a case for WHO and other agencies to investigate US labs from where China thinks Covid-19 escaped. Global Times also did a piece in which it blamed India and its scientific community for being among the first who pointed towards China’s culpability in allowing Covid-19 to spread across the world. The piece, titled, “Source of rumor pinpointed: India-based ‘science enthusiasts’ weave ‘Wuhan lab leak’ lies using online content to feed Western media,” insinuated that India and the West were hand in glove in defaming China.

The Chinese Foreign Ministry even went as far as saying that 12 countries are claiming their Covid-19 “patient zero” was imported from the US. What they did not mention was the fact that Covid-19 entered the United States from China, due to Xi Jinping allowing Chinese people unfettered access around the world despite cases surging in Wuhan in 2019, for reasons best known to him.