Democrat friendly media is suddenly parroting Trump’s line about Covid origins. Are they trying to save Dr Fauci? 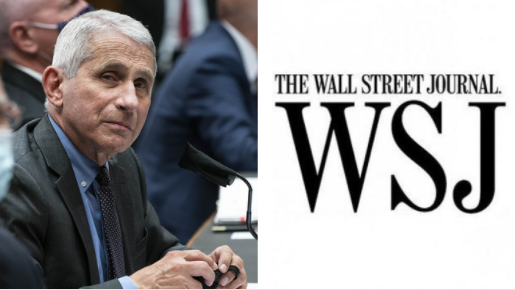 After having criticised former President Donald Trump for the entirety of the pandemic for accusing China for the virus, it seems the Wall Street Journal has also jumped onto the Trump train. The Wall Street Journal, one of Trump’s most ardent critic, has now started parroting Trump’s stand on the origin of the Corona Virus.

The Wall Street Journal (WSJ) confirmed that three researchers from China’s Wuhan Institute of Virology (WIV) were admitted to a hospital a month before Beijing reported the first cases of Covid-19, citing US intelligence. The WSJ report was published on the eve of a meeting of the World Health Organization’s (WHO) decision-making body, which is expected to discuss the next steps in the investigation into the source of the Covid-19 virus.

The study, according to the newspaper “could add weight to calls for a wider investigation into whether the Covid-19 virus may have escaped from the laboratory,” as it offers new information on the number of researchers infected, the timing of their illnesses, and their hospital visits.”

The Biden administration continues to have “significant concerns regarding the early days of the COVID-19 pandemic, including its roots within the Peoples Republic of China,” according to a National Security Council spokeswoman. She stated that the US government was collaborating with the WHO and other member states to endorse an expert-led investigation into the pandemic’s origins that was “free of intervention or politicisation.”

“We’re not going to make pronouncements that prejudge an ongoing WHO study into the source of SARS-CoV-2, but we’ve been clear that sound and technically credible theories should be thoroughly evaluated by international experts,” she said.

Current and former officials familiar with the lab researchers’ intelligence shared a number of opinions about the report’s supporting facts, according to the Journal, with one anonymous source claiming it required “further analysis and additional corroboration.”

In March, the United States, Norway, Canada, the United Kingdom, and other countries expressed their dissatisfaction with the WHO-led Covid-19 origins report, calling for further analysis and complete access to all relevant human, animal, and other data from the outbreak’s early stages.

The Trump administration had claimed that the virus had escaped from a Chinese facility, a claim denied by both Beijing and the news media in the United States.

“The US government has reason to believe that many researchers within the WIV got sick in autumn 2019, before the first confirmed case of the outbreak, with symptoms associated with both COVID-19 and normal seasonal illnesses,” according to a State Department fact sheet published at the end of the Trump administration. It did not specify how many researchers were involved.

But now, the mainstream media is running along the same lines as Trump did. The reason being that Dr Anthony Fauci, the beloved darling of the mainstream media has admitted before a senate hearing that the virus originally originated from Wuhan and in his revelation he also revealed that scores of US funds were also provided to the lab in Wuhan.

Read More: Washington Post rants against other leftist media houses for covering the illegal immigrant surge at the southern US border

Dr Fauci has spoken and revealed information that proves he purposefully kept the information hidden, and the fact that he aided the lab which was allegedly working on the virus makes him a target that can be attacked and criticized for his role in the spread of the virus.

That is where the mainstream media comes in. They cannot allow Fauci’s images to be tarnished as it will ultimately bring attention to the Deep state. Thus, there is an urgent need to push the narrative that the virus originated in China in such a convincing manner that Fauci’s role can be whitewashed throughout the whole saga. Blaming China will gather bipartisan support, as that had been the original line of the Republicans, thus, the deep state is now building an even greater narrative against it so that Fauci’s role can be buried deep down, never to be remembered again.